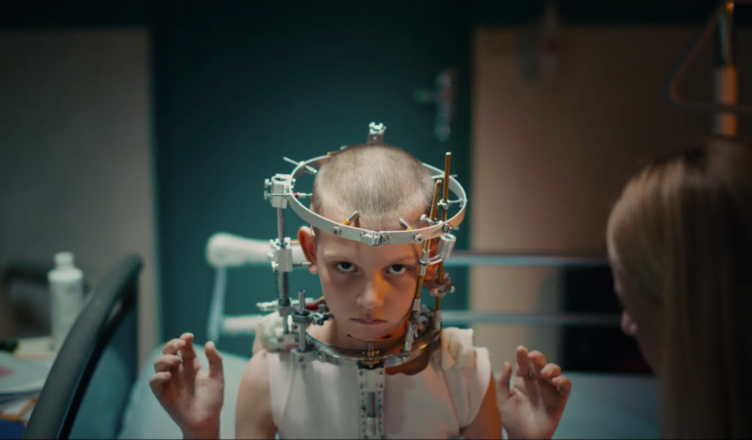 Pinhead: Agathe Rousselle plays a lass in a spot of bother in the French art movie ‘Titane’.

TITANE ***1/2 (108 minutes; subtitled) R
Having mightily impressed everyone with her smashing 2016 body-horror film Raw, French director Julia Ducournau fronts up with another twisted, envelope-pushing shocker that gives new meaning to the concept of car love and features a marvellously teased birth scene that rivals the one in The Fly, directed by one of her heroes David Cronenberg (“His work is in my DNA,” she recently told Indiewire.)

Doucournau’s latest charmer tells of a lass called Alexia (Agathe Rousselle) who has a titanium plate in her head, surgically implanted following a car crash and visible around her right ear when her hair is pulled up.

More than a mere conversation piece, the plate has affected Alexia’s attitude to people, whom she’s none too fond of, and cars, for which she has an unbounded love. She models with them sexily at car shows and her vehicular amour is so intense it results in physical congress.

That’s no exaggeration, either. Remember that scene from 2013’s The Counselor where Cameron Diaz pleasured herself on the windshield of that Ferrari? Well, in Titane the vehicle is a participant in Alexia’s sex act, not just a traction surface. Witness this scene with your eyes open and you’ll never look at gear stick knobs in the same way again.

In a salient reminder about the importance of safe sex and to always use a condom when cowgirling a car, Alexia begins to feel something growing inside her. Surely, it couldn’t be human, something confirmed by her private parts leaking motor oil.

On top of all this, Alexia is also into killing people, something Ducournau covers in the kind of gory detail that rivals anything by George A Romero, John Carpenter or the aforementioned David Cronenberg. And she does it with style, at one point injecting humour into a singularly graphic rampage.

In need of avoiding capture, she pretends to be the missing son of a fire captain. This involves cutting her hair, strapping down her breasts and – in one of many scenes designed to horrify the squeamish – breaking her nose.

Now posing as pretend-male Adrien, Alexia bonds with her new “dad” Vincent (Vincent Lindon), proudly introducing his new-found son to the rest of his firefighting team, some of whom are a tad suspicious.

Adrien tries hard to become part of Vincent’s tightly-knit team, taking part in call-outs, learning the ropes and so forth.

Though it feels like a bit too much time is spends with “dad” and the firefighters, Ducournau cleverly uses the scenario to offset the bizarre nature of what we’ve seen thus far.

Having drawn us into such an utterly perverse, violent scenario, it’s as though she’s almost normalizing Alexia’s situation, for a brief time anyway.

All the while, we are regularly reminded about Alexia’s otherworldly pregnancy with Ducournau skillfully building expectation until the Big Moment arrives.

At Cannes Titane took out the Palme d’Or, making Ducournau first female director to bag the award without having to share it. In 1993 Jane Campion won for The Piano with Chen Kaige’s Farewell My Concubine.

Titane is also after an Oscar in the Best International Film category next year. Should it make it to the podium, here’s to wondering which clip they’ll play.