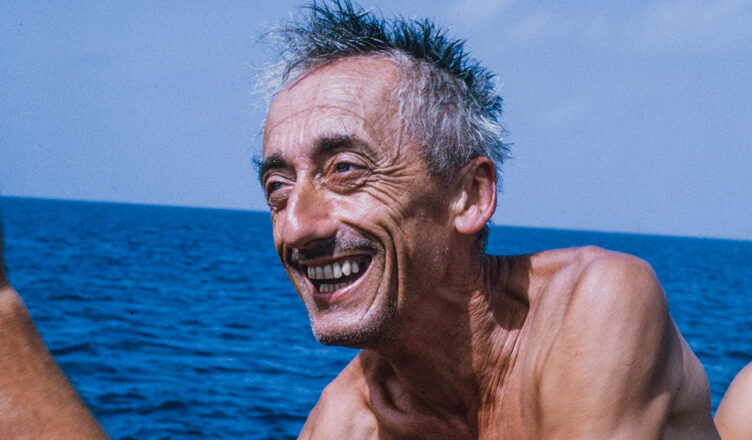 BECOMING COUSTEAU ***1/2 (93 minutes) M
Though we learn a lot about the fascinating, out-sized, culture-shifting life of legendary ocean-loving filmmaker Jacques Cousteau, the chief purpose of the lovingly produced tribute documentary Becoming Cousteau is to strengthen the case for what many people have long suspected; namely, that Jacques Cousteau was born into the wrong species.

It’s hard to imagine any sea-dwelling creature loving the ocean as much as Cousteau did, and the origin of his fathomless infatuation is well detailed in veteran director Liz Garbus’s well-made, if straightforward chronological valentine to his life and achievements.

Most famous for his cinema films and hugely influential TV programs – largely credited, alongside the creation of Greenpeace, with helping ignite the environmental movement in the 1970s – Garbus rightly stresses how Cousteau saw himself primarily as a filmmaker rather than as an explorer or deep-sea diver.

Still, all due emphasis is put on his ground-breaking inventions, including diving bells and the revolutionary “autonomous diving suit, or aqualung, that allowed people to dive longer and deeper than ever. There’s some stark, tragic footage of the life the invention claimed during early trials.

For these candid images, and the many others capturing his life and work, we can thank Cousteau’s commitment to always having a camera on hand to film.

While lucrative oil research kept his sea-faring ventures from going broke, his film work made Cousteau famous, thanks largely to his underwater photography and the development of camera housings that allowed him to produce stunning footage for his American TV series, which turned Cousteau into a global celebrity.

Voiced by French actor Vincent Cassel, Cousteau acknowledges the aesthetic compromise involved in going from cinema to TV. The payoff, he knew, was how the medium would give him instant access to a mass audience that film couldn’t deliver.

Increasingly distressed at the unregulated levels of pollution in the ocean, the film details how he used his platforms and political influence to warn the world about rising temperatures, melting ice caps and the dying sea bed.

The film does a great job pulling focus on Cousteau’s single greatest achievement. On talk shows and in filmed interviews he lodged into the public psyche the idea that the world was one system, with everything being interconnected.

He dispelled the idea, born of denial, that the oceans were vast and limitless, and so capable of absorbing any waste pumped into it.

The seas might be majestic, he began telling the world’s leaders who gathered for his summits (even Fidel Castro turned up), but they were also finite and fragile.

As with all worthwhile tributes, there’s downside and tragedy here.

We hear Cousteau admit to how his devotion to the sea resulted in neglect of his children and of his rather magnificent wife Simone Melchior, his loyal, lifelong partner until her death by cancer in 1990.

Even though she was central to his success and virtually lived aboard their iconic ship Calypso, which she adored, Simone Melchoir shunned the cameras, thus explaining why she has featured so little in his films.

And Garbus is keen to show his environmental attitude was far-from-perfect; early footage (some of it in colour) shows him spearing fish and his crew messing around with giant turtles.

Concept drawings show how convinced Cousteau was that humans were in an evolutionary state of transition and would one day return to the sea. We see concept drawings of humans living in vast colonies on the ocean floor.

It looks silly now, sure, but it does illustrate just how much he loved the ocean. Besides, the he didn’t hold to the vision, which he amusingly retracts before a large group of children during a Q&A session.

Those of a certain age who grew up watching Jacques Cousteau on TV will have embedded in them an automatic respect for his life and work.

Ultimately, though, Becoming Cousteau seems designed not for Boomers but for the present generation who are set to inherit the responsibility for a planet their forebears treated as though it was a rental.