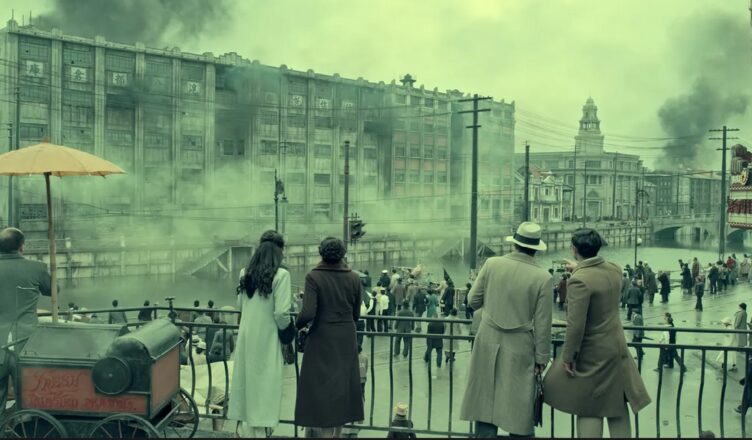 THE EIGHT HUNDRED **1/2 (149 minutes; subtitled) MA
For all the sweep and grit of its many visually impressive battle scenes, the historical Chinese war drama The Eight Hundred is essentially a large-scale curio to Western filmgoers, for whom the film was not designed.

Set in 1937 during the brutal war between China and the invading Japanese forces, the film recounts the last stand taken by a rag-tag group of Chinese soldiers and civilians in a Shanghai warehouse on the banks of the Suzhou River.

While the warehouse side of the city is shattered and smouldering, a few metres away on the other side of the river is the neutral zone, a neon-lit sanctuary bustling with well-dressed civilians and British soldiers with orders to prevent any Chinese soldiers from crossing over, either by bridge or by quietly duck-paddling across the narrow divide.

By all accounts the film’s recreation of the huge four-day battle, orchestrated by director Guan Hu, is historically on point for its ferocity. There’s certainly no arguing with the bleak spectacle unleashed here.

Shot entirely in the giant-screen Imax format, the scale and period detail are often jaw dropping. The carnage is massive and the unflinching brutality of the fighting includes some hard-to-watch scenes where soldiers are forced at gunpoint by a sadistic commander to execute prisoners.

Alongside the battle is the drama unfolding on the “safe” side of the river as people observe the fighting in relative comfort, save for the odd spray of wayward bullets. They even use a catapult to send food over.

With all this going on there isn’t exactly a lot of time to develop any of the dozens of characters, save for a few who distinguish themselves through bravery. Unfortunately, Guan Hu’s default setting when directing his actors is a tad melodramatic, so the performances aren’t as compelling as visuals.

Still, when it comes to the film’s key flag-raising sequence – a moment of suicidal defiance by the Chinese soldiers against their powerful Japanese adversaries – he sure knows how to rouse national pride by alternating between wide shots of battle and close-ups of brave soldiers.

Western viewers will naturally digest such moments differently than their Chinese counterparts, for whom the film was designed as an ode to patriotism and sacrifice for the greater good.

So, while the film works as a wartime spectacle, most viewers beyond China’s borders will struggle to engage with the film’s highly emotional appeal in celebrating the valour of these soldiers.

The film, which cost about $US80 million (half of what it would have cost in Hollywood), has been a monster hit with its target homeland audience, making around half a billion dollars since opening on 21 August.

No surprises there. The events depicted in The Eight Hundred are held in extremely high regard by regular Chinese folk, and the actual warehouse involved has been preserved as a shrine for tourists and citizens.

Yet the film has been the focus of much controversy in China over censorship.

In June 2019, with almost no notice, the film was dropped as the opening film at the Shanghai International Film Festival. A week later its planned release across China was cancelled.

What happened? While no official explanation was ever offered, The Eight Hundred apparently upset senior Communist officials and film censors over its big-screen glorification of Kuomintang – Chinese Nationalist – soldiers. The fighting lads of Mao Zedong’s Communist Party never got a look in.

With this year’s 70th anniversary of the People’s Republic the film’s literal salute to the Kuomintang flag was deemed to be in poor taste, regardless of the movie’s appeal to a broader patriotism.

This move came shortly before the film One Second by renown Chinese director Zhang Yimou was pulled from the Berlin International Film Festival in February, again for offending the delicate sensibilities of Communist Party officials.

Ultimately, The Eight Hundred reportedly underwent some snipping, which apparently accounts for why the Nationalist flag, while it is raised and saluted in the film, is never seen in close up.

It’s horrible when governments interfere with art for political reasons. The one good thing about this incident is that it was greeted with widespread hostility from China’s film folk, who saw nothing healthy about the interference, and bravely said so.

The hope underlying all this is that cinema will help bring positive change to China.

China’s film market is now about as big as Hollywood’s, and the Chinese people absolutely love Western movies. The signs are growing that film culture is exposing them to more enlightened values than will one day permit historically accurate films to be shown without being forced through a political filter.