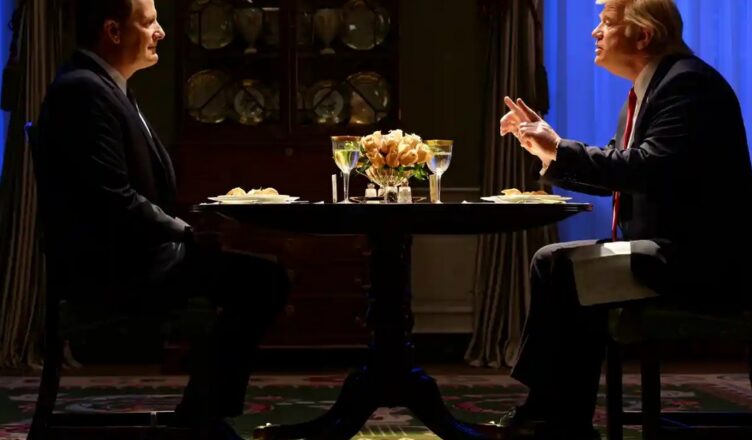 THE COMEY RULE ** (210 minutes; two parts) M
If you hate Trump, you’re going to love The Comey Rule – and you’re going to absolutely adore James Comey. Be in no doubt about that.

With its adulatory agenda firmly in place, the film recounts in glorious detail the battles Comey (Jeff Daniels) fought as director of the FBI in the lead up to and shortly after the election of President Donald Trump (Brendan Gleeson) in 2016.

To be clear from the outset, though James Comey is technically not a saint, according to the loving portrait presented in The Comey Rule he ought to be.

For the uninitiated, Comey was the FBI chief who twice investigated the Hillary Clinton email scandal in the months before Trump’s victory. He drew a lot of heat and hate for that and was consequently blamed by many for handing the election to Trump.

As a result, Comey was dubbed “the most hated man in America”. The brief here is to recast Comey as the staunchly principled, avuncular director of the FBI who stood up to the arrogant, un-presidential behaviour of the new Commander-in-Chief.

With its high production values, strong ensemble cast and swish cinematography The Comey Rule creates the mirage of classy event television. Yet it isn’t so much a TV drama as a cleansing ritual.

Based on Comey’s memoir A Higher Loyalty: Truth, Lies, and Leadership, the film has the pretense of being a “this is how it really went down” chronicle. That’s tosh.

Political memoirs are notoriously self-serving beasts, designed less to set the record straight than to upholster the author’s place in history, and writer/director Billy Ray (he wrote Richard Jewell, Captain Phillips, The Hunger Games) takes his cue from Comey, gleefully happy to come to the party, and with a plate.

It’s a tad ironic that while Comey is celebrated as a paragon of impartiality, Ray’s tabloid direction is wholly partisan and delights in Trump-bashing at almost every turn.

Trump can’t even have a phone conversation without a sense of impropriety filling the Oval Office. In one scene the sharply focused bust of Abraham Lincoln looms in the foreground while Trump is a babbling blur in the background. You half-expect Lincoln to come to life, Night at the Museum-style, and scream: “You are violating my legacy!”

Showing almost everything from his perspective, Ray frames Comey as an unsung national hero, a noble guy unjustly hated for doing his job, a champion of due process whose love of country and the Constitution was matched only by his love of family. For Comey that included his wife, his children and those with whom he worked.

Just to punch the point, many of Comey’s utterances are accompanied by subtle piano tinkles, suggesting great profundity in his words.

What a guy. If we didn’t know better, you’d swear he’d stepped into his FBI chair straight out of a Frank Capra/James Stewart film.

As well as recounting the email scandal, the film also deals with the Russian interference in the 2016 election. Because it’s such shady business Ray hits cloak-and-dagger mode, showing two unkempt Russian agents lakeside in Washington DC bragging about their online impact. The only thing missing is the maniacal laugh.

When it comes to Comey’s dismissal the event is seen as a tragedy, an insult to the nation inflicted by a petty president.

In a serviceable but unremarkable performance, Daniels plays Comey as the lovable Washington elder who has seen enough and done enough to know that the only thing that matters is integrity.

Unfortunately, Ray’s hammy direction overplays matters. With the White House suddenly flooded by Trump and his protocol-averse acolytes, the threat to Comey’s dedication to due process is seen not just as a personal affront but as a violation of America herself. It’s as subtle as a sandwich-board.

The main attraction in The Comey Rule is, of course, Brendan Gleeson’s portrayal of Trump. The prosthetics are impressive, but the performance is mimicry suitable for a nightclub residency. Yes, Trump is a goofball, a bully, an ignoramus, a blowhard and an opportunist but Gleeson and Ray refuse to go beyond the contours of caricature.

So what we end up with in the clash between Comey and Trump is Dudley Do-Right versus Snidley Whiplash.

The show’s huge cast includes such notables as Peter Coyote, Holly Hunter, Michael Kelly, Jennifer Ehle, Scoot McNairy and Kingsley Ben-Adir as Obama. There is, however, nobody playing Hillary Clinton.

While much is made of Russian interference in the election, it’s never countenanced that perhaps Clinton was a political slug whose open contempt for working Americans – the “deplorables” – and subscription to identity politics mortally wounded her chances. Or even that she was a sub-standard campaigner and debater.

For all its faults, The Comey Rule can’t be faulted for lacking sheer narrative drive. So, while it might not be a very good drama, it is never boring. Certainly, those who are on-side with the film’s politics will eat it up like a free dessert. Those who aren’t could still find its indulgences and bias perversely enjoyable.

One major sticking point can’t be overlooked, however. While Comey is portrayed as a man ruled by ethics and honesty, you have to question the film’s own regard for accuracy where it really matters.

In the most egregious departure from fact in The Comey Rule is a scene where Comey is solemnly looking over the victims of the Pulse nightclub shooting, the biggest terrorist attack on American soil since 9/11. It’s a powerful moment – or is supposed to be.

Only he never visited the site. Placing Comey there doesn’t fall within the purview of artistic license, it’s sheer hagiography at the expense of respect for the slain. It’s a pretty low act and hard to forgive. For a show about a man and his morals, it’s a pretty immoral thing to do. What were the makers thinking? Where was their conscience?

Originally scheduled to air late in November, The Comey Rule was moved up in the schedule to September after complaints from Billy Ray, Jeff Daniels and others demanded it be streamed before the election. They clearly want the film to hurt Trump and influence the vote.

Is there anything wrong with a film or TV show having an unambiguous political agenda? Of course not.

The danger, however, is that it might only play to the like-minded and not change a single vote. It’s hard to tell. If Trump wins the film will be deemed to have had no effect. If he loses, the makers of The Comey Rule will surely expect invitations to Joe Biden’s inauguration as reward for helping him win.

But can a film truly influence an election? Here’s a sobering morsel for thought.

When Michael Moore’s rabidly anti-George W Bush opus Fahrenheit 9/11 came out in 2004, five months before the election, Moore stated clearly how he wanted the film to sway voters.

Yet while the film was lauded and went on to become the most commercially successful documentary of all time, Bush triumphed. This suggests that films with political agendas appeal to those of like mind rather than change minds.

Another word for that is propaganda, which is another way to describe The Comey Rule.