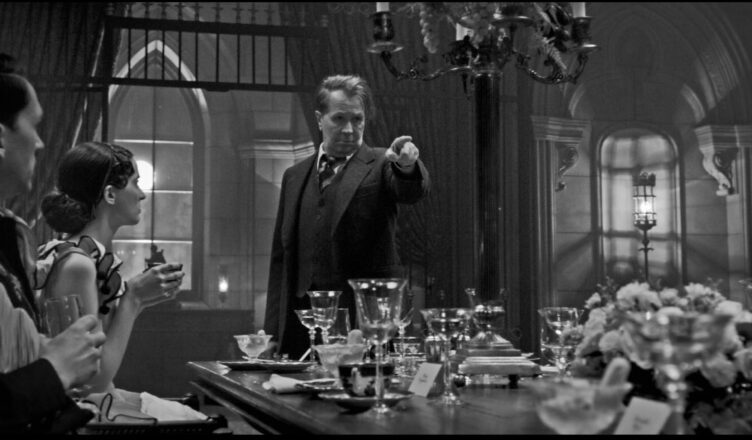 MANK ** (132 minutes) M
For filmmakers with a passion project the most important thing isn’t just to get their beloved film made, it is surely to be sure they fully convey to their audience the passion that drove them to champion their pet project from dream to opening night.

Not to be confused with his younger, infinitely more talented and noteworthy brother Joseph L Mankiewicz (Dragonwyck; Julius Caesar; Guys & Dolls; Cleopatra, etc etc), Herman is best-known as the writer of the original draft of Orson Welles’ Citizen Kane, and for being a hopeless alcoholic.

Based on a screenplay written by the director’s late father Jack Fincher and originally slated for production more than 20 years ago, Mank concentrates on the inspiration Mankiewicz drew upon for Citizen Kane, namely his relationships with media titan William Randolph Hearst (Charles Dance) and his actress/wife Marion Davies (Amanda Seyfried). The story flashes back from Mank’s recovery after a car accident in 1940 to the early 1930s when he was a regular at San Simeon, Hearst’s mountain-sized estate and playground.

As “Mank” Gary Oldman is hammy as heck, playing the souse as one of those imbued drunks whose genius is roused by booze and who are blessed with a gift for highly articulate outbursts, usually before throwing up.

Shot in black-and-white, the film boasts some pretty period decorations but fails miserably in its half-hearted attempt to replicate the texture of films from the period.

Fincher puts in a couple of phony reel change markers (aka cigarette burns), a pointless style gesture given how the film has the crisp look of HD video and is shot in 2.35 aspect ratio, a format popular in the 1950s but alien to the 1930s and 1940s. (Quentin Tarantino was much better at this kind of thing with his 2004 car-chase classic Death Proof.)

Mank can also be faulted for being pretentious and self-important.

With much of the drama taking place around the offices and sound stages of the Old Hollywood dream-making machine, you can feel the film desperately straining to say something significant and meaningful about the art of movies.

“This is a business where the buyer gets nothing for his money but a memory. What he bought still belongs to the man who sold it. That’s the real magic of the movies.”

True back then, for sure, and for decades hence, but not today when you can forever own a film – any film – for a few cents (and often for free). As an ironic comment on film culture the moment works as wistful nostalgia, yet the ham-fisted way the scene is composed suggests it’s intended as some soul-stirring observation about the essence of cinema. No sale.

On top of all that, Mank makes a strained, elongated effort to comment on present-day America. Hearst is a propagandist for a Republican candidate and when Mank discovers that he is producing political spots that fabricate man-in-the-street vox pops he goes ballistic. The reference here, of course, is to the Trump era and the proliferation of fake news.

Designed for hardcore cineastes who will delight at all the name dropping, Mank has its moments but its lack of pace and air of self-congratulation make it a contender for one of the most overrated films of 2020.