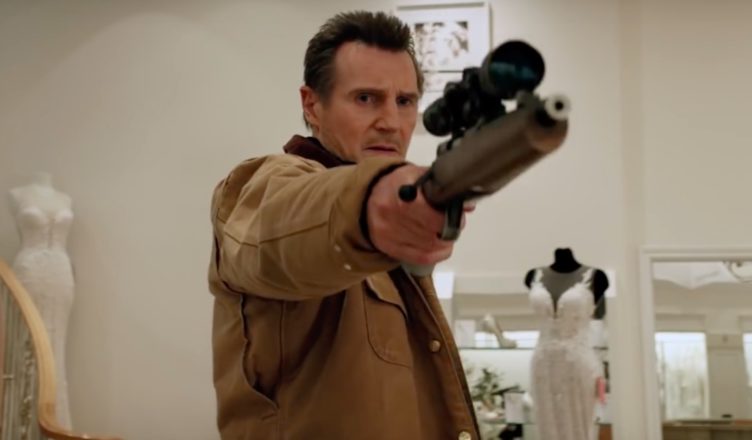 Man of Reason: Liam Neeson is out for yet more revenge in his latest action film ‘Cold Pursuit’.

COLD PURSUIT *** (119 minutes) MA
Everybody’s favourite killer-curmudgeon is back and this time he’s mixing his Charles Bronson-style love of vengeance with a generous smattering of straight-faced humour.

Liam Neeson (who did you think?) plays a guy who operates a snow plow in a remote American town and is none-too-happy when local drug thugs murder his son.

So, it’s shoot’em up time in much the same manner as his Taken movies, only with zingers. There’s a pretty decent plot involving a long-running gang war between the local goons and an indigenous group, which serves up a slew of funny supporting turns.

As with all of Neeson’s latter-day action films, Cold Pursuit is an enjoyable, throwaway time-killer that should satisfy Neeson’s fans until it inevitably turns up in a boxed set.

The film is a remake of a 2014 Norwegian film called In Order of Disappearance (Stellen Skarsgard played the lead), its director Hans Petter Moland again presiding over things.

Unfortunately, a pall has drifted over Cold Pursuit. Strong expectations for the film’s box office were thrown into doubt earlier this week after Neeson told The Independent of an incident four decades ago when a friend of his was raped by a black man.

Neeson said how, in anger, he spent a week cruising around with a cosh hoping a black person would accost him and thus give Neeson an excuse to exact some lethal revenge.

In the interview, and in a subsequent TV interview with ABC, Neeson was clear of how ashamed he is of his behaviour. Still, that didn’t stop him from being savaged by fans and it resulted in the red carpet premiere of Cold Pursuit in New York from being cancelled at the last minute.

Many are now looking to the film’s public reception as an indication about whether Neeson did the right thing in speaking so honestly about feelings he deeply regrets.

ON THE BASIS OF SEX ** (120 minutes) M
There’s a peculiar type of time travel that happens within certain types of period films. You’re watching a story that apparently happened decades ago, yet the people speak and behave in ways that suggest they’ve been instructed by time travellers from the 21st century.

Such moments happen frequently throughout On the Basis of Sex, a well-meaning, fact-based, self-consciously progressive story about a gutsy young female legal eagle called Ruth Bader Ginsburg (played by Felicity Jones, and subject of a recent Oscar-nominated doco) and her ground-breaking courtroom battle against sex discrimination laws, which she argued were unconstitutional.

All the makings of a fine legal drama are right there. Unfortunately director Mimi Leder (Deep Impact; The Peacemaker; Pay It Forward) insists on imposing present-day liberal sensibilities on the proceedings that signal the film’s virtues so conspicuously there is almost no room left for the characters to breathe.

The film charts the early academic life of Ginsburg as she attends Harvard with her husband (Armie Hammer), and it’s there we get the first of a long, loud series of sexist backhanders about how women are infiltrating a male domain.

After fighting her way through several more barriers, we find her as a teacher holding classes that wrestle with sex discrimination law. Through her husband she comes across a juicy case that allows her to challenge an out-dated law in court.

Irony of ironies, it’s a man she’s defending, a poor single guy caring for his mother who simply wants to deduct expenses on his tax return. The law says he can’t because he’s male, and thus Ginsburg seizes her big opportunity to assert the principle of equality before the law, regardless of gender.

It hurts to think how good the film could have been had Leder not presided over it with such a leaden hand. Shot as though it was a 1970s telemovie, the lengthy courtroom scenes become quite tiresome as the film lumbers towards its predictable conclusion.

And because the film’s mindset is so predetermined, and the outcome a matter of historical record, there’s no tension. We know what’s going to happen and Leder seems so uninspired by the import or momentum of the case that you just end up sitting the film out.

While the performances try hard, many scenes have a smarmy, prescient ring to them. One scene involves Ginsburg’s daughter facing down some wolf whistlers. Another shows the change of wording in a key legal document where “sex” is replaced by “gender”.

In better hands these would have been memorable cinematic moments. As it is, it’s just sandwich-board messaging. The one truly remarkable thing about the film is how such a genuinely remarkable story has been reduced to hip cliches and bland grandstanding.


MARIA BY CALLAS **1/2 (114 minutes) PG
Fans of the mega-famous soprano opera singer will have their love indulged here as the innumerable interviews Callas has given on radio and before the cameras are used to narrate her life story.

There are golden moments where she addresses her alleged reputation as a “difficult” woman, her failing marriage to her manager/husband and her battles with New York’s MET (Metropolitan Opera) for its lack of imagination.

While it’s not so surprising that there is so much footage of her – YouTube brims with docos and interviews about Callas – what is surprising is how almost every arrival at an airport or venue features long, loving close-up colour footage of her remarkably beautiful face.

It seems the press was as obsessed with her beauty as with her celebrity, something which she spend her life fighting, especially when struggling with her feelings for shipping tycoon Aristotle Onassis.

Across a fiercely independent career, he was the only man who seemed to wield absolute emotional power over Callas, a woman whose control over every aspect of her life fell short when it came to family.

While the unconventional choice to tell the Callas story through her words has a certain intimate appeal and style it, of course, cuts off other perspectives, opinions and versions of her story.

Hardcore opera buffs will no doubt point out (with relish) the many gaps, omissions and distortions. Still, we do accept that with the attractions of first-person narratives comes the peril of the unreliable narrator, so perhaps a grain of salt is needed while listening to her dulcet voice.

THE COMBINATION REDEMPTION *** (103 minutes) MA
In 2009 director David Field and actor/writer George Basha released The Combination, a tough, independent Australian film that dared to deal head-on with the issues of ethnicity and racial violence in Sydney’s western suburbs.

Now, 10 years on, comes the similarly bold, similarly themed sequel that follows the story of John (George Basha), a Lebanese Australian ex-con whose brother was killed by gang violence at the end of the previous film.

Working as a boxing instructor and still dealing with his anger issues, John becomes embroiled in the local underworld when a young, rather stupid drug pusher Mo (Rahel Romahn) stumbles into John’s orbit. Mo is being pursued by the henchmen of a local drug lord for a bad debt and they’re as violent as they are thick-headed.

Admittedly, the film covers much the same terrain as the first, with the major addition being the rise of the “real Australia” movement, with an ultra-right politician tapping into the fears and latent racism of locals by pushing the “this isn’t our country anymore” line.

Replete with swearing and a generous splattering of blood, Field – best-known as the hard-faced actor from Chopper, Two Hands and Gettin’ Square – does a solid job compressing a grab-bag of storylines, including a slightly superfluous romance, into a cohesive crime-drama.

Imperfections pepper the film: some of the dialogue is laboured, the swearing hits GoodFellas levels, and a few of the supporting actors are a little stilted.

Still, for the most part the film works, moving at a brisk pace as it rises to the challenge of confronting hot-button, contemporary issues.

Indeed, amidst all the film industry rhetoric of how Australian films are duty-bound to reflect Australian stories, both Combination films, Serhat Caradee’s Cedar Boys (released in 2009) and Abe Forstythe’s daring 2016 black comedy Down Under form a sub-genre of post-Cronulla films that face down the issues of tribalism in Australia’s suburbs.

A shame, then, that almost nobody knows about these films, which have not gotten anywhere near the audiences they deserve thanks to virtually nil marketing.

The Combination: Redemption falls squarely into an all-too-familiar pattern of good quality Australian films getting limited releases with almost no public profile, destined to be seen by a tiny audience before disappearing into the stream where it will hopefully find its people.

Shot in about three weeks back in 2017, the film’s production values are strong and certainly belie the movie’s meagre budget of less than $1 million.

These feats of low-budget filmmakers are worthy of special awards – think of how Last Cab to Darwin and Wolf Creek were made for less than $2 million – but for how much longer can local filmmakers keep spending years and years pouring their hearts and souls into making films that take two breaths at the cinema before being consigned to that special place in obscurity reserved for Australian movies?

These issues, and many others are covered in this interview with David Field and George Basha, who were in Melbourne to promote The Combination: Redemption.

The gents have formed a special creative partnership that allows them to keep making films, whatever the hardships of funding or production are.

In between the Combination films they made the 2014 prison drama Convict (now streaming) and are already planning their next movie, The Sentence, which they describe as a film about disability that is very different in style to their crime-dramas.

With a supportive fanbase in Melbourne and Sydney, Field and Basha feel they are in a good place, though they make clear the frustrations embedded in trying to get independent films made.