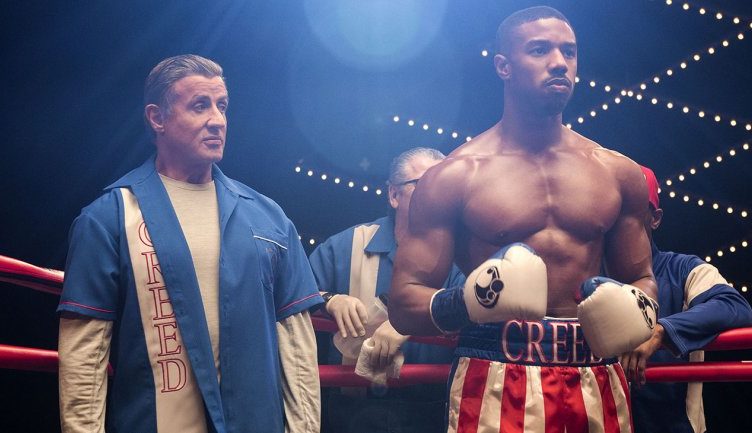 Back for more: Sylvester Stallone and Michael B. Jordan get ready to go another round in the very fine ‘Creed II’.

If the marvellous, moving, soulful Creed II is anything to go by, the Rocky franchise might well turn out to be the great anomaly of early 21st Century Hollywood cinema.

For while sequels usually succumb to the law of diminishing returns – bigger budgets; fewer surprises; thinner stories – these Rocky films have been on the improve since 2006’s Rocky Balboa reignited the franchise after the regrettable Rocky V.

In Creed II – the eighth Rocky film and follow up to 2015’s monster hit Creed ($174 million global) – we get a pensive, tough-minded, extremely well-directed drama (with Steven Caple Jr taking over from Ryan Coogler) that refuses to take easy options or cop outs.

With the birth of a child on the way, Adonis Creed (Michael B Jordan) is confronted by a major title challenge from hungry Russian fighter Viktor Drago (Florian Munteanu), whose trainer and father Ivan Drago (Dolph Lundgren) killed the father of Adonis, Apollo Creed (Carl Weathers), during an exhibition fight in 1984, as chronicled in Rocky IV.

With Rocky (Sylvester Stallone, who still co-writes and produces these films) there as his physical trainer and psychological guide, the film is a surprisingly thoughtful, touching reworking of Rocky’s bedrock theme about self-respect and how success in life involves persistence and fortitude against all odds.

The thudding boxing matches are vivid, brilliantly edited and placed in perfect dramatic context, reminding us that the age-old “sport-is-life” metaphor has arguably received its finest workout in the best of the Rocky films.

And yet beyond the ring and the gym there are a lot of quiet scenes in this film, ardent passages blessed by evocative cinematography that explore the new dramatic spaces opened up by these Creed films.

In particular, the film deftly probes the connections between children and fathers – to its great credit, the film does not relegate Viktor and Drago to two-dimensional supporting characters – while Creed’s journey is hit by some sharp left turns.

As was the case with Creed, the film has been designed as a stand-alone story, so while fans of the franchise will pick up on all the references to earlier films, you don’t need to have seen any of the Rocky films, not even Creed, to appreciate the very fine drama on show here.

The big bonus of this approach is that even though Creed II necessarily references images and events from Rocky IV, the film can have its own downbeat style without having to acknowledge or apologise for the cheesiness of Rocky IV, with its Cold War politics, flashy musical numbers and cute robots. Nor do we need to look down on the film, a pure product of its time. It was, after all, the 1980s.

Much has been made of Stallone’s comment that Creed II is his “last rodeo” as Rocky, a character he was happy to retire in 2006 with Rocky Balboa. While we can take that with the usual grain of salt, what’s far more important is Stallone’s gratitude that the Rocky legacy has been picked up by a new generation keen to develop the franchise in fresh and unexpected ways.

And, yes, chatter about a Creed III is already abuzz.

Proving again how some of the most satisfying dramas can hark from the quieter corners of independent cinema comes Andrew Haigh’s unassuming yet compelling wisp of a film about adolescence.

With school an unmentioned absence in his life, Charley enjoys an as-you-please home life with his free-wheeling father (Travis Fimmel), who likes bringing home women and gives Charley far more freedom than is good for him.

Eager for distraction and something useful to do while quietly pining for his beloved, estranged aunt, Charley picks up some piecemeal work at the local race track where he befriends a gruff horse trainer (Steve Buscemi) and helps care for a horse called Pete, with whom he inevitably forms an attachment.

It’s not a kid-movie premise, though. These horses are nags, one bad race away from sale to a south-of-the-border slaughter yard. And though Charley is a quiet, introverted kid, he pushes back against the contempt these horses are shown, leading to a spot of horse-napping.

Adapted from the 2010 Willy Vlautin novel, writer/director Andrew Haigh (Weekend; 45 Years) has fashioned a beautiful, lyrical adolescent drama that side-steps coming-of-age cliches to pursue an earthy story about an untethered, uncared for kid in desperate search for family and the stability that normality can bring to an aimless life.

Interviews inevitably reveal that while some find solace in the arrangement others see it as symptomatic of deeper worries. With Louis ever-willing to put himself into the frame, there is a sense from his subtly probing questions that this attempt to revive the concept of the “open marriage” from half a century ago is essentially priming people for distress and heartbreak. The film’s implicit message is the old one, that “free love” is never truly free.

Tacked on to this doco is a 20-minute interview with Louis as he goes through the highs and lows of making Weird Weekends for the past 20 years.

Louis fans will love it, though, again, please note this isn’t a feature documentary the way his Scientology film was, it’s TV on the big screen.

If this fine, though unremarkable, animated retelling of the Dr Seuss Grinch tale tells us anything it’s just how cheeky and daring Ron Howard’s 2000 film starring Jim Carrey truly was. For while that film was full of invention, wit and self-skewering satire, this serving from Illumination (the Despicable Me people) is a handsome, by-the-numbers kids film.

As we all know by now, the cheery, snow-dusted citizens of Whoville are set upon by the Christmas-hating Grinch (voiced by Benedict Cumberbatch), who lives above them, alone in a cave full of mod cons with no company but his agile dog-servant.

His dastardly scheme to ruin their Christmas by removing all of its frippery and decoration does not have the desired effect and, with the source of his anti-Christmas hatred revealed and triggered, Grinch has an epiphany and tries saving the occasion for Whoville.

Seeing films in theatrettes has its advantages, but nothing beats seeing them with their intended audiences where you can really gauge just how skillfully a movie can be packaged. Watching this film at a special preview in Sydney with several hundred kids aged 4-6 it was remarkable how almost every visual gag got the raucous response intended.

So it’s no surprise the film has already earned about $US220 million worldwide, and that’s before the Christmas stampede.

Still, the Howard/Carrey Grinch took $US345 million, and that was back in 2000, which inflation rings up as a cool $506m in today’s dosh, so this Grinch has its work cut out for it. Not that it’s a competition or anything.