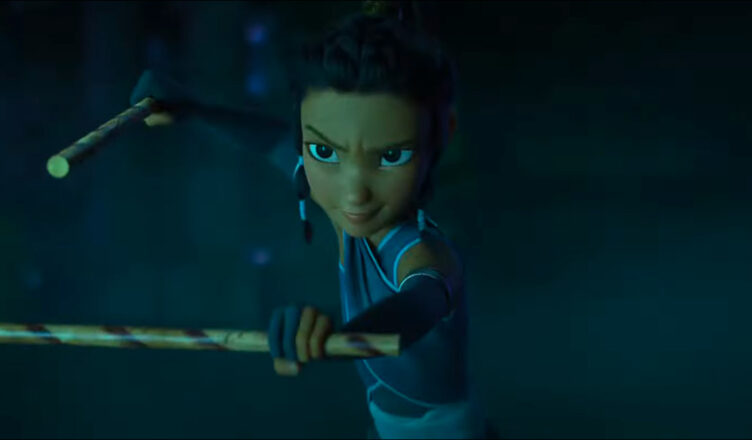 Up for action: Raya proves herself a worthy Disney princess in ‘Raya and the Last Dragon’.

RAYA AND THE LAST DRAGON **** (114 minutes) PG
It’s pretty obvious to anybody who’s paying attention that Disney will soon engulf what’s left of the entertainment industry before inevitably going on to take over the entire world.

And that is perfectly fine so long as it keeps making films like Raya and the Last Dragon.

A crowd-pleasing delight from logo to crawl, Raya gleams and crackles with an infectious upbeat energy.

Meticulously designed as an inclusive family experience, the film also meets the demands of the date-movie demographic by being exactly funny enough and exactly dramatic enough to keep adults fully engaged. Disney must be forever grateful for what the breakout success of 1992’s Beauty and the Beast taught it about the importance of built-in crossover appeal.

As broad entertainment, Raya is full of positive messaging neatly embedded in a great action-adventure story full of off-beat characters that radiates a giddy comic vibe reminiscent of the original Aladdin, Toy Story and Zootopia.

The basic plot is also refreshingly clear and linear compared to the congested narrative of, say, Frozen 2, which, let’s be honest, had a bit too much going on.

Some 500 years earlier the place was peaceful and unified, with humans happily co-existing with dragons.

Then came a bunch of evil, fabulously animated, vapourous creatures called The Druun with their world-destroying agenda and frightening black-and-purple colour scheme.

To save the humans, the dragons combined their powers to create a glowing magical orb that successfully repelled the Druun, but at the cost of the dragons, who all disappeared into legend.

Flash forward and the orb is in the possession of the Heart community, where Princess Raya lives. She’s busy training with her father Benja (Daniel Dae Kim), the head of Heart Land, to protect the orb from the clutches of those from the other lands – Talon, Tail, Fang and Spine – all of whom resent Heart because they believe the orb brings it good fortune, and so should be shared.

A noble attempt by Raya’s dad to negotiate peace goes south, the orb gets broken into five pieces, rendering it powerless as the other factions steal away with a chunk each.

And so, The Druun return to lay waste, turning people into stone and basically threatening Armageddon, which is the way these legends tend to go.

A nasty turn of events, to be sure, but it provides the quest necessary for our sparky hero, who embarks on her dangerous journey. Her mission is to rouse a mythical Water Dragon, then reassemble the five pieces of the orb and so restore the world back to the tranquillity and painterly beauty it once enjoyed.

Of course, being fiercely independent, strong-willed and great with a sword doesn’t mean Raya can succeed on her own.

She does have her loyal companion Tuk Tuk, a large armadillo-type critter that can roll like a ball, thus providing Raya with emissions-free, fuel-efficient transportation.

Yet she finds she can’t do it all and so ends up with a rag-tag crew of companions who join the journey, their chief function being to help punch the values of loyalty, friendship and reliability amidst all the marvellously staged action.

And, of course, they form a family of sorts, so all that’s in there, too.

The dragon, called Sisu, is a major hoot and provides much of the film’s comedy. The slithery, wise-cracking, shape-shifting character is voiced by the occasionally funny Awkwafina (Crazy Rich Asians; The Farewell; Ocean’s 8) who, one must admit, does a pretty good job here.

Spots of her fast-talking performance are reminiscent of the brilliant work Robin Williams did for Disney’s 1992 animated classic Aladdin. By that exalted measure it’s fair to say Awkwafina is 10, maybe 15% as funny. That’s high praise.

Directors Don Hall (Big Hero 6; Moana) and Carlos López Estrada really move things briskly, staging some top-notch fights and chases while sustaining a competitive tension between Raya and her nemesis Namaari (Gemma Chan), who is daughter of the ruler of Fang Land, thus giving us a great princess-vs-princess story core.

All up, Raya and the Last Dragon is simply great entertainment and – important point, this – is clearly aimed at pleasing boys as well as girls. So, calling it a girls’ film sells it way short.

While much has been made of the cultural significance in having strong, inspiring female leads in films and TV shows – something that has been happening since, ooh, about 1970 – Disney has always been smart in making sure its femme-led films will appeal to boys as much as girls.

That was definitely the case with Frozen and is certainly the deal with Raya, whose titular tyro joins that long, laudible list of Disney female heroes.

Freshly hatched though she is, Raya also takes pride of place in the pantheon of great Disney Princesses, a group of gals who have evolved into the most consistently inspiring feminist figures in modern movie history.

Here’s to the sequels.