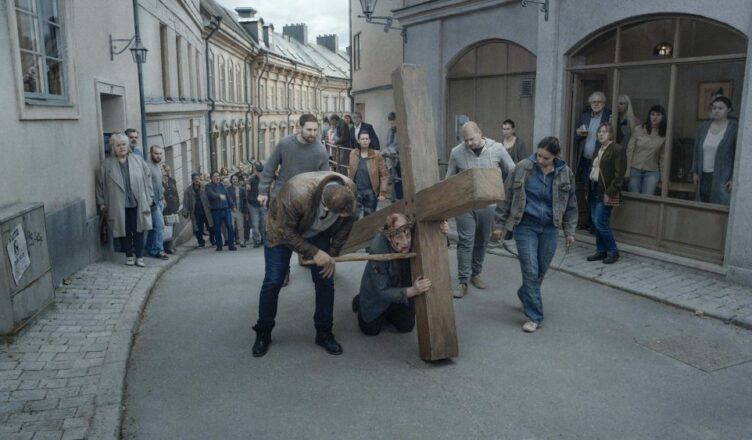 Need a hand?: A man shoulders the ultimate burden in ‘About Endlessness’.

ABOUT ENDLESSNESS ** (76 minutes; subtitled) M
The distinctive style of oddball Swedish director Roy Andersson has graced some fairly mesmeric films, most notably 2007’s acclaimed You the Living, an absurdist mini-masterpiece that showed his mastery of long single takes and playfully sardonic ideas.

Unfortunately, About Endlessness boasts all that is familiar and cherished about Andersson’s signature style, only the magic is missing.

With the camera locked into place, figures are either frozen still in the frame or move slowly through a series of gently surreal vignettes.

It seems like a random assemblage: a man drags a large crucifix on his shoulder as he is whipped and taunted; another begs for his life before his execution; a girl is picked up at a train station; and old man laments over an age-old grudge; a priest confesses to a doctor about his loss of faith; a couple fly over the landscape.

Naturally, you try shaping all these scenes into themes, looking for meaning, but it really doesn’t add up to much. And none of it really qualifies the film as being an absurdist comedy.

If the film is intended as a cinematic contemplation about the great beyond, it is a rather bland one – and largely humourless. Arresting as some of Andersson’s compositions are in About Endlessness, there’s nothing to match the dark humour of the elderly dogwalker from You, The Living.

That probably won’t be enough to dissuade Andersson’s fans that in his work lurks some kind of maverick genius. But if there is depth and meaning and cryptic commentary about modern life in About Endlessness it is very well encrypted.