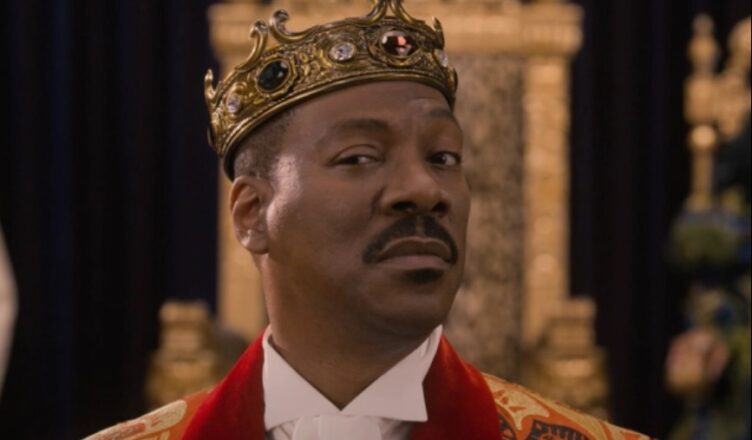 COMING 2 AMERICA * (108 minutes) MA
The only good thing in Eddie Murphy’s awful sequel to his 1988 hit comedy Coming to America is the fleeting re-appearance of Saul, the elderly Jewish gent Murphy created from beneath layers of special make-up.

All up, Saul takes up about a minute of screen time, so there’s that one percent of the film accounted for. Unfortunately, you have to sit through the rest of Coming 2 America to get to him.

Just as Murphy has had more than his fair share of hits, he’s also produced more stinkers than most: Meet Dave; A Thousand Words; I Spy; Imagine That; and the now legendary $100 million fiasco The Adventures of Pluto Nash. (No, the critically reviled Norbit is not included because it was funny. And popular.)

Having acquitted himself so splendidly and so recently in Dolemite Is My Name, it was perfectly reasonable to expect that Eddie Murphy would bring his A game to the sequel of one of his biggest comedy hits.

The first time around he found his wife Lisa (Shari Headley, who returns here); now it’s to locate Lavelle (Jermaine Fowler), the son he didn’t know he had, and bring him to Zamunda so he can assume the throne.

One huge problem with the film, especially for those who love the original, is that Akeem has blithely betrayed his principles of equality.

Get this: he now has three daughters, but they are not eligible to rule because they are the wrong gender.

For Pete’s sake, Akeem’s search for a wife in Coming to America was in defiance of his homeland’s sexist traditions; he wanted a modern, independent woman with her own mind and harboured a clear desire to bring Zamunda into line with the modern world.

Yet here, over 30 years later, we find that he has done absolutely nothing to challenge these traditions or make things better for women. They still can’t own businesses, for crying out loud.

So, what was the point? Did the makers actually watch the first film over to remind them what Akeem’s whole motive was?

All that stuff is now carried by Lavelle who, after an initial burst of elation over his move from poverty to royal luxury, assumes the mantle of saviour to the women of Zamunda – a land that has somehow quarantined itself from the modern world, save for the opening of a McDonald’s-type outlet, managed by his father-in-law Cleo McDowell (John Amos, also making a return).

Limply directed by Craig Brewer (Dolemite; Hustle and Flow; Footloose) the film is about as amusing as stubbing your toe on a brick. It’s woefully forced and mostly unfunny.

The thing is loaded with stunt casting, including appearances by Gladys Knight, Salt-N-Pepa, En Vogue (remember them?) and, Lord help us, Morgan Freeman. What was he thinking?

James Earl Jones returns as the King, but thankfully makes an early exit. Arsenio Hall also returns as Akeem’s friend, providing fleeting moments of mirth with Murphy in their all-too-brief reprise of the barbershop from film one.

The only vaguely interesting thing about the Coming 2 America is its signal about the future of movie distribution.

Like so many other big studio films it was intended for a major cinema release in 2020, but was nixed by CV-19.

The argument for getting big films out to a global audience via streaming is a compelling one given the Covid-induced difficulties of doing that through cinemas. That was the thinking behind the move by Warners to release all its 2021 films on both platforms.

It costs a studio a lot to keep a big film on the shelf; films such as Paramount’s Top Gun 2 are essentially unrealized assets that could have earned a billion dollars by now.

So get ready for more seismic shifts in the movie business as studio bean counters crunch the numbers and work out what is best for its own survival.

And if that means more straight-to-streaming and more cinema bypass, that shall be the way the mop flops.

Thought bubble: Has it ever occurred to Murphy to do a Saul movie? If so, where is it? It could be a Borat-type deal as Saul interacts with real people, or something like that. While making the first film, he once walked through the studio offices as Saul and nobody knew it was Murphy in disguise. How about a movie version of that, with some hidden camera stuff? Just putting it out there.