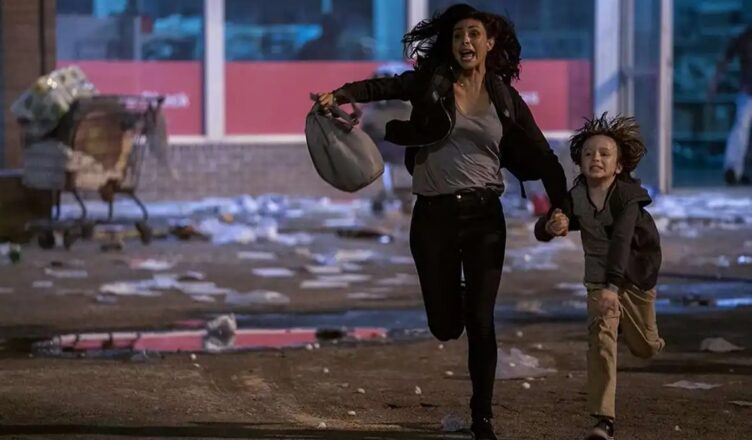 Unhappy days: A desperate mother ((Morena Baccarin) and her son (Roger Dale Floyd) run for their lives in the disaster movie ‘Greenland’.

GREENLAND *** (119 minutes) M
If movies have taught us anything it’s that nothing brings a family together better than a good disaster.

We’ve had Deep Impact, Armageddon, War of the Worlds, The Impossible, 2012, San Andreas, Skyscraper, Twister, Dante’s Peak and Outbreak – and that’s just to name a few off the top without doing a Google trawl. Honest.

The latest end-of-the-world epic to illustrate how impending doom draws us all closer together is Greenland, a very well-made, well-thought through reworking of the formula where the spectacle and visual effects serve as background to a pretty solid character-driven survival yarn.

The scenario is familiar enough: a comet is heading towards Earth, and after the initial comfort from the government that it’ll be a near-miss that will light up the sky, it is soon announced that the cosmic curve ball is primed for a direct hit.

First the splinters from the comet will rain down, destroying cities and large parts of the landscape in a frightening preview of what is to come when the big one hits causing an Extinction Level Event, a piece of scientific jargon we learnt from Deep Impact.

Caught in the global panic is structural engineer John Garrity (Gerard Butler; also a producer), his estranged wife Allison (Morena Baccarin) and their diabetic son Nathan (Roger Dale Floyd). They’ve been selected for government protection and must get to the airport amidst all the rioting and associated mayhem that is breaking out.

Things go pear-shaped, of course, and after a very nicely staged eruption of aviation fuel at the airport they get separated.

Though it might be a while before we see Gerard Butler at the Oscars podium, it’s got to be said in all fairness that he’s proven himself as an action star and a reasonably good straight actor.

OK, it might still be a tad difficult to understand exactly what he is saying through that thick Scottish accent, still here Butler does a perfectly fine job combining grit with regular-guy desperation as a dad on the run trying to reunite with his family while coping with the uncertainties of a crumbling society.

Doing all the heavy lifting, though, is Morena Baccarin who provides the emotional core of the film. As a confused, terrified mother she really brings it as she tries finding medication for her son in the middle of a riot. Then things actually get worse, and she responds accordingly as a parent lost and alone in a stream of violent chaos.

In a neat, novel touch, the real heroes of the film turn out to be minor characters who appear in only a scene or two – truck drivers, pilots, soldiers, nurses, mothers, security officers, even gun-wielding thugs. These bit parts are invested with a surprising amount of story prominence, their presence perhaps intended to signify how compassion often shows itself best in a crisis.

The apocalyptic visions conjured by director Ric Roman Waugh (Snitch; Shot Caller; Angel Has Fallen) and his army of digital wizards are impressive.

Cities and suburbs are transformed into flaming ruins as mini-comets streak across the darkened sky and pound mercilessly into civilization. He even pays attention to things such as shock waves, which are too often ignored in action films when thing go ka-boom. Bravo.

More affecting, though, are the scenes of grass-roots panic as roads are clogged with frightened citizens, shops are looted and security cordons breached.

In an eerie foreshadowing of the recent incursions into the Capitol Building in Washington DC we witness a crowd invade a military facility that forces soldiers to fire upon civilians.

The film’s scenes of rioting also resemble a lot of the distressing news footage that accompanied the reign of President Trump. It was probably unintentional, but the similarities are nonetheless startling, with the film evoking Americans at war with each other, a theme that is uncomfortably timely.