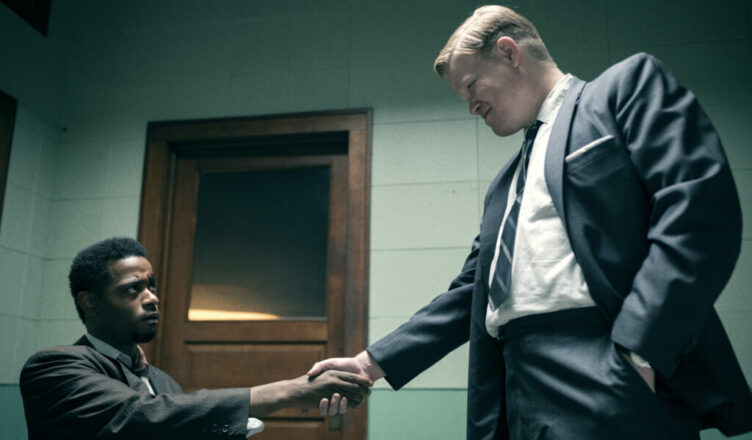 Let’s make a deal: A lowly thief (Lakeith Stanfield) agrees to work for an FBI agent (Jesse Plemons) in the historical civil rights drama ‘Judas and the Black Messiah’.

JUDAS AND THE BLACK MESSIAH **** (125 minutes) MA
If there is one hard, irrevocable truth burning at the heart of the outstanding civil rights period drama Judas and the Black Messiah it is that there is only thing worse than selling your soul to Satan, and that is selling it to the FBI.

Such is the bitter lesson inflicted upon Bill O’Neal (Lakeith Stanfield), a petty thief and police imposter working the mean streets of Chicago in the 1960s. Soon after being caught and arrested he cuts a deal and is recruited by FBI special agent Roy Mitchell (Jesse Plemons) as a means of infiltrating the increasingly powerful Black Panther movement.

O’Neal’s task is to get close to Panther leader Fred Hampton (Daniel Kaluuya), a man reviled as a Communist revolutionary by FBI chief J Edgar Hoover (Martin Sheen), whose word is gospel to his suited underlings, particularly his officious acolyte Mitchell.

Ingratiating himself into the Panthers, O’Neal proves himself to be exceptionally efficient and mercenary, rising through the ranks and feeding the FBI highly sensitive information exposing the vulnerabilities within the Panthers on which the police and the FBI take pre-emptive, often lethal action.

Initially, O’Neal is more than happy to take the money for his dark services. Gradually, however, his conscience is pricked as the import of events and the powerful speeches delivered by Hampton begin breaching his deflector shields of denial.

Bad news for him, though, is the salient fact, delivered matter-of-factly by his handler Mitchell, that there are some lines you can only cross once. Being a snitch for the Feds is one of them. The true price you pay for selling out your brothers and sisters to the Feds, he painfully discovers, is moral impotence.

Seething with period authenticity, boiling emotional themes about the arbitrary nature of justice and studded with stellar performances, Judas and the Black Messiah is a gripping historical drama with an absolutely riveting story about the high art and low blows of betrayal.

As the inspirational, community-spirited figurehead Fred Hampton, Daniel Kaluuya (Get Out) is intense, fiery and passionate, a coil of anger perfectly countered by the gentle, tender presence of Dominique Fishback, so good as his romantic interest Deborah Johnson.

In what must have been one of the most enticing offers of his career, Martin Sheen is a slam dunk as FBI boss J Edgar Hoover while Jesse Plemmons is on point in his subdued portrayal of a cool-headed company man, his mannered style of delivery putting one in mind of the late Philip Seymour Hoffman at his best.

Still, the film belongs to Lakeith Stanfield; what a compelling portrait – and what a literally and figuratively treacherous character arc he traverses. From bumbling lowlife thief to FBI informant, his material motives gradually begin grinding against principles that only surface once he realizes the depth of his betrayal. It’s sterling stuff, and there are bound to be Oscar nods for him and others in the cast.

As a factually based historical piece the film does good service in recasting the traditional movie image of the Black Panthers as a group of scary-looking tough black people in sunglasses and berets holding baseball bats and shotguns, ready for a fight.

Well, there is that angry aspect, but here the film also shows them as a more socially grounded, community-minded group than we are used to seeing. The Panthers certainly had a revolutionary agenda that posed a threat to the establishment, yet the organization also sought to provide medical services, improve education and feed hungry children.

Perhaps controversially, the film powerfully posits how the main motivation behind the Black Panthers call for societal change was more economic than racial, with poverty and class inequality being the chief enemy as they gain the support of Latin Americans and poor white people. It’s a very confronting redressing of the stereotype.

The direction by Shaka King, who co-wrote the film with Will Berson, is superb and subtle; with none of the stylistic flatulence or overt politics of Spike Lee, his dramatic focus and ability to highlight the emotional cadences of a race-based narrative puts one in mind of great progressive, socially minded directors such as Norman Jewison, Stanley Kramer and Sidney Lumet.

With textured cinematography by Sean Bobbitt, King vividly captures the fire and brimstone aptly, yet really proves himself with the grace notes that modulate the film’s gentle romance and the insidious manner by which O’Neal is ultimately manipulated to act against his will.

One remarkable scene shows O’Neal being persuaded to spike Hampton’s drink. It’s chilling, made all the more so by Mitchell’s business-like manner.

As seems to be standard these days – huge thanks to the research and resources made available through the internet, apparently – the period recreation seethes with detail, from the decor to the furniture to the hairdos. The only concern here is that the deft use of colour and lighting might be largely lost if the film is seen anywhere other than a cinema.

Above all, the film’s defining quality is its focus on the drama over the politics. Yes, the film is political (of course), but that breathes through the story and the characters; it’s not forced, thus making it more effective and powerful.

Here’s thanks to the Movie God that the film does not feel or sound like a period film with a contemporary mindset or voice, a problem that beset the Australian film High Ground. The dialogue reeks with believability.

From all the figures available, Judas and the Black Messiah has not done much at the Covid-affected box office; even on a paltry budget of $US26 million – the average studio film costs about $US80 million these days – the film has taken about $US4.7 million, which pretty much qualifies it as a bomb.

Still, it’s probably a good time to remind ourselves what a challenging time it is for movies to get an audience and that a box office take is not necessarily a comment on quality, which has always been the case.

So, the prayer goes out that Judas and the Black Messiah eventually finds the viewers it deserves through whatever platform.

Still, see it on a big screen if you can.