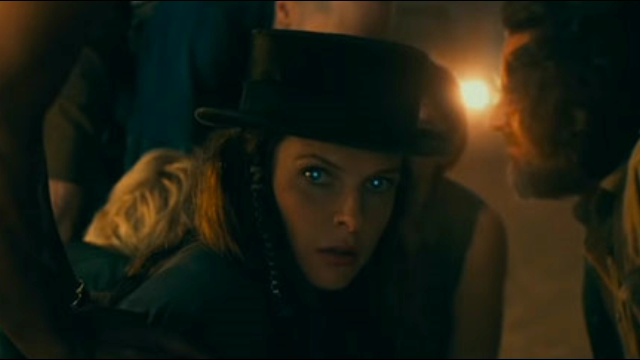 Look into my eyes: Rose the Hat (Rebecca Ferguson) is the central evil in ‘Doctor Sleep’, the sequel to ‘The Shining’.

DOCTOR SLEEP **** (152 minutes) MA
Nearly 40 years after being chased around the corridors and grounds of the remote, snowbound Overlook Hotel by his axe-wielding dad in The Shining, Danny Torrance returns to our screens as an adult with more baggage than his mind can bear and a host of ghosts to contend with in the excellent, immersive sequel Doctor Sleep.

Both based on novels by Stephen King (1977 & 2013 respectively), Doctor Sleep is directed with very measured, seductive pacing by Mike Flanagan (who also wrote the screenplay).

Much like the recent shocker Midsommar, the film harks from the slow-burn school of movie horror, side-stepping the type of garish, poke-in-the-ribs style we saw in the recent It films for a more contemplative, brooding approach.

Being chased by your father with a block splitter as a child can leave you in something of a mess, which is precisely where Dan (Ewan McGregor) finds himself in mid-life.

The ghosts of The Overlook are still very much with him, including that of Dick Hallorann (Carl Lumby, memorably played by Scatman Crothers in the original), who advises the young Dan to use his psychic abilities – that is, his “shining” – to face down these evil spirits and lock them away forever in boxes in his mind.

He tries hard, but barely copes. Dan is a jobless drifter, long reliant on the fleeting comfort of alcohol to get by. And as Fate would have it, just when he finds some semblance of stability by working in an aged care facility in a small town, his world is shaken by a gaggle of ghouls, lead by the icily beautiful, top-hatted she-spook Rose the Hat (Rebecca Ferguson who puts in a terrific, darkly seductive performance).

She leads her acolytes in the hunt for those with “the shining”, their purpose being to slowly kill any such being and feed off their energy, thus prolonging their earthly lives.

Their pursuit of Abra (Kyliegh Curran), a young girl with said “shining”, draws Dan back into the orbit of the Overlook’s meanest ghosts, whom he must ultimately battle in the decaying, once-grand interiors of the abandoned hotel.

Those familiar with The Shining – now considered, with some objection, as one of the best horror movies of all time – might recall how Danny’s gift of psychic ability doesn’t really have all that much to do with the film’s plot.

He doesn’t use it to help or save anybody – he surely could have telepathically warned Dick that his father was running around crazy with an axe – and the film’s resolution has nothing to do with his gift.

In Doctor Sleep, however, that’s not an issue. Dan’s shining is in constant use and is a major plot driver, putting Dan squarely in the centre of the fight with these troublesome spectres. He’s a hero figure here, his motivation drawing on Dick’s advice to conquer his fears by facing them directly, a neat message that underpins the story.

Flanagan, best known for quality B-grade horror hits as Oculus (2013), Ouija: Origin of Evil (2016) and the fabulous Gerald’s Game (2017; check it out on Netflix), adopts a highly disciplined approach here, allowing the film’s creepy atmosphere of dread to slowly seep into your skin so that when the horror hits, it hits hard and it hits deep.

And while he was reportedly eager to honour the narrative integrity of King’s novel, Flanagan has nonetheless fashioned Doctor Sleep as a sequel to Stanley Kubrick’s 1980 film.

Having clearly studied Kubrick’s film closely, Flanagan restages several iconic scenes from it in exacting and impressive detail. And once the action returns to the echoing halls of the decrepit Overlook he and his crew do a superb job recreating the space right down to the subtle lighting and camera moves.

It’s quite a tribute to Kubrick. And given how Stephen King – who so famously disliked The Shining he produced his own mini-series version of it in 1997 – has enthusiastically gone on record saying how much he liked Doctor Sleep – “a terrific, terrific movie” he told the gals on The View – it appears Flanagan has succeeded in blending the original film into the new one. That’s one perilous creative tightrope to traverse!

As suspicious as we so often are of sequels, we do spare our cynicism when the pedigree of their creators suggests the film will entertain, captivate and honour the work that came before.

Or, at least, that it won’t stink.

As when Harry Potter creator JK Rowling delivers prequel garbage such as the Fantastic Beast movies. Or when Steven Spielberg and George Lucas conspire to squeeze out an arthritic Indiana Jones adventure so bad South Park had to devote an entire episode to it.

Here, however, it all clicks. Doctor Sleep brandishes both the distinctive sting of Stephen King and echoes of Stanley Kubrick to deliver an unnerving spookfest that’ll make you think you’re experiencing a throat-tightening dose of deja vu.

EMU RUNNER *** (95 minutes) PG
A winning performance by new-found child actor Rhae-Kye Waites anchors a simple, bitter-sweet story of the impact tragedy has on a free-spirited indigenous girl whose growing connection to the land comes at the expense of her school attendance and the patience of her father (played nicely Wayne Blair, director of The Sapphires and Top End Wedding).

Set in the remote, dust-swept town of Brewarrina (complete with tumbleweeds), the delicate direction by Imogen Thomas, who worked closely with cultural consultant Frayne Barker, occasionally hits moments of real poignancy and beauty as the girl tries finding her new place in a new world.

LAST CHRISTMAS **1/2 (103 minutes) PG
Allegedly inspired by the song from the late George Michael, this twee serving of Christmas treacle tells of lonely, love-starved Londoner Kate (Emilia Clarke) who, on the brink of homelessness, happens upon the handsome Tom (Henry Golding, from Crazy Rich Asians) who injects romance and adventure into her dull life.

Working in a shop that sells Christmas products all year, Kate has long felt a loss of the Christmas spirit, yet Tom seems to fill the gaps in her soul with such verve and personality you begin wondering if this turn of events is a lovely Christmas movie miracle, or something else.

Look, Last Christmas is an unashamedly mushy rom-com and it’s a safe bet that those willing to surrender themselves to the film’s schmaltzy charms will get a medium high from its Christmas-flavoured cuteness and smattering of gags. Just watch the thing become a big pre-Christmas hit.

Still, there is a point, even in harmless fluff like Last Christmas, where the sugary tone can become positively bland.

Take Emilia Clarke’s performance. She’s gorgeous and clearly a good actress, as her epic turn as dragon mistress Daenerys Targaryen in Game of Thrones has shown the world.

Yet here she only seems to have two basic expressions: smiling widely or not smiling widely. Admittedly, she has a goofball daffiness that sells much of the film’s comedy, and she does appear to have something very few British actors possess – perfect teeth.

Directed by Paul Feig (Bridesmaids; Spy; Ghostbusters) and written by Emma Thompson & performance artist Bryony Kimmings, the film aims its Cupid’s arrow at the heart but pierces the wrong organ. It unwinds like a poor imitation of a Richard Curtis film – which is meant to be a put-down but is actually faint praise.

Also praiseworthy is the film’s casting, which seems to be vying for a Diversity Award. Kate’s parents are Yugoslavian (Emma Thompson plays her mum), we have Golding in the lead and Michelle Yeoh, his mother from Crazy Rich Asians – let’s never forget her twirling turn in Crouching Tiger, Hidden Dragon – plays the owner of the Christmas shop where Kate works. Now that’s diversity.

BRITISH FILM FESTIVAL HIGHLIGHTS
The ever-growing British Film Festival is in full swing across Melbourne. Now in its seventh year, the offerings are bigger and broader than ever, including 16 Australian premieres and a tribute to Helen Mirren who, according to an act of Parliament, is legally mandated to appear in every single film made in Britain. (Joke alert).

Two quality pieces to watch out for are: Fisherman’s Friends, the lively, funny, true-life tale of a London record executive (Daniel Mays) who strives to turn a fishing community’s singing group into a hit recording act, and Military Wives, a moving drama about a choir formed by the spouses of soldiers while they are on tour. Based on the real story that ignited scores of such choirs, the film stars Kristin Scott Thomas and is directed by Peter Cattaneo, best known for the classic British comedy The Full Monty.

DOSED *** (84 minutes) M
Desperate to free herself from soul-destroying depression, anxiety, and addiction to the prescription medications that keep her stuck in a holding pattern of misery, Canadian drug addict Adrianne agrees to seek alternative and highly illegal treatments using psychedelic medicine.

Without much regard for privacy or good taste, yet clearly committed to revealing tough truths about addiction and recovery her friend, director Tyler Chandler, chronicles Adrianne’s bumpy journey in exhausting detail that can often leave the viewer exhausted. (One scene involving regurgitated medications is especially hard to stomach.)

It’s a long, slippery and treacherous road back to relative normality for Adrianne, and the subjective first-person approach allows Chandler to capture brutally raw images of a person trapped in emotional and physical turmoil.

One could argue that more restraint could have been employed during Adrianne’s more embarrassing episodes, though that, of course, would have come at the cost of impact and immediacy.

The film is designed as an activist documentary and, by that measure, does a fairly effective job using emotion and anecdotal evidence to further the growing worldwide movement for the careful and measured lifting of restrictions regarding the use of alternative treatments for those suffering chronic conditions.

A few talking head interviews provide some limited scientific ballast though, frankly, the film could have done with more facts and figures to flesh out its points.

That said, Adrianne’s odyssey is compelling and occasionally harrowing, with insights into her tortured soul often occurring before the camera. Dosed is not as good as the similarly themed Australian documentary Green Light, but certainly makes a worthy companion piece.