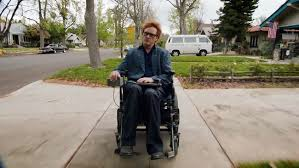 The perils of alcohol addiction have long been a mainstay of mainstream cinema, and it’s easy to see why. The allure of the cautionary tale combined with the in-built drama of somebody in a self-destructive spiral regularly produce films that are memorable, poignant and, in some cases, tinged with hope for the afflicted.

And, of course, there is the prurient pleasure of seeing how effective somebody is at portraying intoxication without straying into caricature.

Certainly, such films call upon the actor at the centre of the mayhem to plumb the depths and pull out something remarkable to reflect the turmoil and self-abuse that comes with a life out of control.

Since Ray Milland played an alcoholic in The Lost Weekend (1946) that’s often been the case. He won an Oscar for that performance, as did Nicholas Cage for his memorable drunk in Leaving Las Vegas (1995). And though he was only nominated, Jack Lemmon is always remembered for his doomed alcoholic in 1962’s Days of Wine and Roses.

And how can we ever forget the lushes played by Richard Burton and Elizabeth Taylor in Who’s Afraid of Virginia Woolf? (1966). A searing, black film that won Liz her second doorstop.

So if tradition is any guide, Joaquin Phoenix is at least up for a nomination for his sterling work playing John Callahan, the American cartoonist who only found fame, fortune and a degree of self-esteem after his drunken adventures lead to a road accident that rendered him a quadriplegic.

Callahan is a singularly sorry sight, an aimless soul, deserted by his mother, lost in the bright California suburbs, his dependence on booze seemingly a form of self-imposed punishment for existing. Being sober is not an option for him. At a party, he even spikes his beer with tequila.

Life only takes on meaning when it is nearly taken from him, his screams of impotent rage as he is strapped to special apparatus in the hospital signalling an epiphany that took a tragedy to activate.

Beforehand, he didn’t care about his life. Now he tells his beautiful nurse (Rooney Mara) that he fears being deprived of a future. At the Alcoholics Anonymous meetings, hosted by a rich drunk (Jonah Hill in another impressive turn), Callahan faces his biggest struggles, which involve being liked by the rest of the group and putting himself in the hands of a “higher power”.

Phoenix infuses every step forward, every setback, with conviction. Dealing with bureaucracy has him screaming in the rain; discovering he can still have sex is bliss; the advent of being given a motorised wheel chair is sheer glee as her regains his mobility.

Adopting a non-linear approach, director Gus Van Sant (Good Will Hunting) keeps focus on alcohol as the main demon in Callahan’s life, even after his car crash. Fiery scenes show him arguing with his carer for more booze and turning up to AA meetings in his wheel chair to try and face down his inner hatred.

Even the discovery of his gift for cartoon gag-making is seen not as the triumphant conclusion to a journey but merely a part of it, denoting his increasing ability to share what is on his mind. Bringing his work to life, the cartoons are animated, though strangely no mention is made of his remarkable animated series Quads!, a remarkable show that refused to patronise the disabled.

Though it’s not a “faith” film, the film features so many mentions of God, He’ll probably end up getting nominated (imagine the acceptance speech, thanking Himself over and over.). There’s no irony intended, especially when spouted by Hill, who is also deserving of a nod for his understated turn as a rich hippie with a drinking issue.

Those who like complaining about the lack of originality from Hollywood studios should find some solace in the artistry and daring of Alpha, an engrossing survival film about the plight of prehistoric people trying to make ends meet amidst the beauty and savagery of a landscape they are a few aeons from dominating.

Set 20,000 years ago and told with minimal dialogue (all subtitled), we follow the simple tale of a tribe whose men must head out on the big hunt before the brutal winter hits.

Key among them is the son of the chief Keda (Australian Kodi Smit-McPhee) who is under pressure to prove to the other men that he is worthy of unchallenged succession.

The land is harsh and the critters that roam them see man not as a threat but as a potential food source. Hard choices are part of the skill set required to make it back, one being to abandon Keda to the elements when he becomes separated from the group.

Alone and injured, he tries finding his way home only to be chased up a small tree by a pack of hungry wolves. After waiting them out he nurses a wounded one back to health, which he slowly befriends.

The journey then becomes an ode to co-dependence as the two form a hunting team, one chasing game into the kill zone of the other. Presumably what we are witnessing here is the first teaming up of man and dog. It’s a wonder Disney didn’t make this film.

The stunning scenery (with a little digital assist to give it some prehistoric edge) combined with the epic simplicity of the story make this a compelling, visually seductive vision of humankind’s first steps towards civilization in a harsh, indifferent landscape.

Rugged up in unfashionable post-caveman cloaks, Smit-McPhee adds yet another terrific turn to his formidable filmography (Gallipoli; The Road; Let Me In; Slow West, etc). And when it comes to having a limb give out, he certainly makes you feel it.

Director Albert Hughes – who co-directed with brother Allen such distinctive works as The Book of Eli, From Hell and Menace II Society – fills the film with painterly compositions, but perhaps his biggest achievement here is the direction of animals that are digitally rendered.

Real animals were used for the film, but many important scenes would have simply been impossible without deploying some extremely high-level digital artistry. The quality of these remarkable images is now so life-like that the only thing that tells you they are digital is the intricacy of direction that real animals, however highly trained, would not have been able to follow.

And what a perfect time to take pause and acknowledge those moments during a film’s end credit crawl when the hundreds of digital artists involved in a film’s production scroll upwards, filling the screen for many seconds. It’s their painstaking work that helps bring visions such as Alpha to such vivid life.

A lot of people have it in for Kevin Hart, and given how some comedians are an acquired taste it’s fair to declare that if you count yourself among the many who found his squealy, goofball schtick irritating in such films as Central Intelligence, Ride Along and Get Hard then Night School ain’t gonna win you over.

Flip the coin over, however, and those with broad, admittedly undemanding comic tastes will delight in his latest offering which comes with plenty of predictable sight gags, a little messaging and those inevitable, eardrum-rattling moments when Hart emits one of his signature squeals. He’s like Chris Tucker (Rush Hour), but shorter.

The film’s set up has Hart playing Teddy, a high-school drop out who has made it as a BBQ salesman. He’s got a super-glam girlfriend (Megalyn Echikunwoke) and a perilous financial situation that has debts building up.

Convinced by his accountant pal
(Ben Schwartz) that his happiness could collapse at any moment, he accepts a job offer as a financial services salesman. The one big condition: that he completes his high school education.

So off to night school he goes where he locks horns with no-nonsense teacher Carrie (Tiffany Haddish) and his classmates, a delightfully funny collection of oddballs played by a great ensemble (Rob Riggle; Romany Malco; Mary Lynn Rajskub, Anne Winters; Al Madrigal).

As with most American comedies, Night School goes on for about 20 minutes longer than it needs to. The reason for this common feature, by the way, is because comedians who also produce and write their films, as Hart has done here, like filling them with fellow comedians who get to do their thing on screen, whether it’s story related or not. If all that superfluous material gets a strong reaction in the crucial test screening phase, in it stays, length be damned.

Thankfully, the over-long running time is forgivable here thanks to the consistent flow of low brow gaggery.

At a time when race is such a big, sensitive deal in comedy, Hart here doesn’t make jokes so much about race but about playing the race card as an excuse to avoid doing something important. It occurs several times in the opening reel, and it’s as though Hart and his African American colleagues are making a statement that they are fatigued by people blaming racism for their troubles.

Also, given the problems African-American youths, especially boys, have at school, any film that celebrates the value of education and its ability to improve one’s prospects deserves major kudos. Hart has a huge black audience in the US so it seems he’s keen to work in some positive messaging amidst all the pratfalls.

Years after a disastrous raid on an Afghan village Mike (Sam Smith), a conscience-stricken Australian soldier, plans to return with a bag full of money and a crippling desire to be forgiven.

Directed by Benjamin Gilmour (Son of a Lion; Paramedico), Jirga is a little film with a lot to say. Shot on location and making the most of the stark, almost surreal beauty of its landscapes, Smith’s lonely soldier is a study of moral determination driven by inner suffering.

Traipsing across the wounded country, he bonds with his driver (Sher Alam Miskeen Ustad) before delving deep into territory that sees him as an unwelcome alien.

The film is a simple tale, yet there are rich subtexts at work as Mike submits himself to fate at the hands of people who, according to their customs, have more than enough justification to subject him to a violent death.

With next to zero production budget, Gilmour and Smith risked their necks to get the film made.

In this interview they discuss the making and meaning of Jirga, their opinions of large American films about the war in the region and their views about the politics of the day.