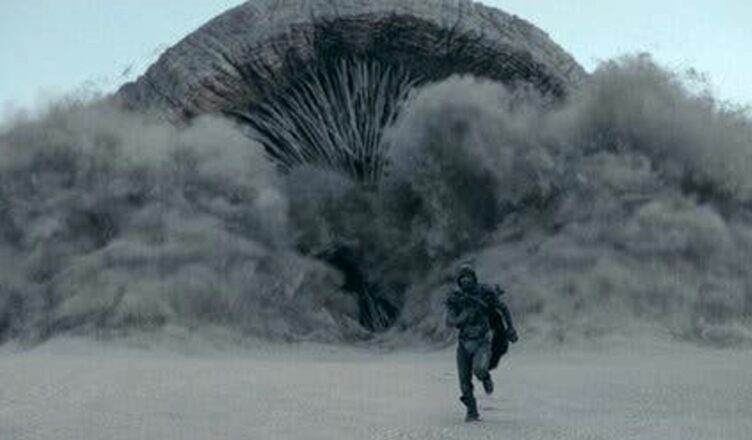 Snack time: A giant sandworm comes up for a spot of lunch in ‘Dune’.

As jaw-dropping as the sweep of the film often is, writer/director Denis Villeneuve (Incendies; Prisoners; Blade Runner 2049) has done a superb job using the epic scope and grand designs that power the film’s rich visuals to frame an engrossing, intimate, character-strong story of dynastic ascendancy, colonization and interplanetary rivalry.

If David Lean could make a space picture, Dune would be it.

Distilled from the legendary 1965 novel by Frank Herbert, the space opera of Dune goes something like this.

The desert planet Arrakis contains a special spice in its sands. For the indigenous people, the Fremen, it has great health benefits. For those who come to plunder it, the spice gives them the power to traverse space.

For mysterious reasons, the not-so-nice and rather ugly miners from House Harkonnen have upped stumps and left Arrakis in their gargantuan, brick-like ships and gone back to their dark, grotty home planet, Giedi Prime.

Yes, they need the spice, but he wants kinder, gentler dealings with the local Fremen, whose powers and knowledge he wants to harness to secure dominion over the planet against the ever-present threat of the Harkonnen hordes.

By his side is son Paul (Timothee Chalamet), a gaunt, eager young lad who would rather be at the rough end of operations with space jock and trusted pal Duncan Idaho (Jason Momoa). Duty, however, demands he keep within his ceremonial and diplomatic roles. After all, he is in line to take over House Atreides.

Paul is also trying to master an inherited gift called The Voice, a mind control power not-at-all dissimilar to The Force from Star Wars. (A coincidence, surely. A-hem.)

On top of that, Paul radiates a strong vibe that has those around him suspecting that he could be The One, again a concept not-at-all dissimilar to what we saw in Star Wars.

So, off they scoot to Arrakis the hot desert planet, again an idea not-at-all dissimilar to Luke Skywalker’s home planet Tatooine. (Anyone else sensing that it’s possible George Lucas might have read Dune before coming up with Star Wars? Just a thought.)

There’s tension, of course. The Duke is keen as beans to get spice production going; they have to secure the place from attack; and as if harvesting the spice with these giant machines isn’t hard enough, they’ve got to contend with 400-metre long sandworms that are so big they can gobble up one of the giant spice-harvesting leviathans in one gulp without so much as a burp.

We didn’t needed yet more proof that Australian cinematographers are world leaders in the art, yet here we have Greig Fraser (Last Ride; The Boys Are Back; Zero Dark Thirty; Foxcatcher) filling the film with luminous images that often make it look like they went off-world and shot the film in space. (Has somebody already said that?).

With stately compositions that are often painterly, he captures both the jaw-dropping scale of the story and its intimacy, as when Paul connects with a tiny, big-eared kangaroo mouse that inhabits the hot sands of the planet.

Lovers of movie spacecraft will love Dune for its design work and the marvellous extremes therein. On the one hand, when we’re in space we get an assortment of odd-shaped spaceships with smooth features and an imposing presence.

On the ground, however, it’s a fabulously different design deal. Everyone flies about in things called ornithopters, which is like a helicopter, but instead of rotor blades there are these long, foldable wings that make the machines look like giant mechanical dragonflies.

They’re beautiful to behold, yet they have the visceral nuts-and-bolts feel of a loud flying machine, with everyone having to yell to be heard through clunky headsets. It’s a stark contrast to the ships we see in orbit, a brilliant example of great movie design work.

It’s the emotion and intrigue that matters most, of course. Along with staging some stellar action sequences – including a great rescue set-piece involving a sandworm – Villeneuve does a superlative job imbuing the drama with a fruity Shakespearean feel as the actors move about massive sets clearly inspired by the Brutalist school of making things look grand and commanding and a bit oppressive.

Though he doesn’t lean too much on it, Villeneuve does draw out some strong, topical themes about colonization and third-world exploitation.

The beleaguered Fremen have long been forced to fight for their survival in the face of a never-ending succession of invaders who come to plunder their home for resources without giving them a cut.

In this regard you can’t help but warm to the performance by Oscar Isaacs, who gives the Duke a real sense of regal decency. He knows the power of his vast forces, yet his intentions towards the Fremen is based on respect and partnership.

And desperate though he is to get spice production up to speed he gallantly puts life before profit, as one scene boldly illustrates. It’s a really deft touch that really grounds the Duke as a man of honour.

For his part, Timothée Chalamet does a fine job in the lead as Paul tentatively feels his way into the role he is destined for, reluctant though he might be to accept such huge responsibility.

It’s an engrossing rite-of-passage arc that we see him begin with this film, one that exacts a huge but necessary price.

The film is, of course, based on Frank Herbert’s award-winning 1965 novel, a universally hailed work long regarded as one of the most influential in modern sci-fi, as George Lucas would no doubt attest.

Those whose formative years were in the 1970s, the novel also holds the distinction of being the most popular unread novel of the decade. Everybody owned a copy but nobody ever got through the first few chapters because the story was so dense.

To that end, Villeneuve appears to have dome what all book-to-film adaptations should do, which is to streamline and reshape the original text into a movie.

After the incomprehensible garble of David Lynch’s 1984 film (whichever version you sat through), and the very good, if occasionally plodding 2000 mini-series Frank Herbert’s Dune starring William Hurt, it is heartening that this Dune has as one of its producers Frank Herbert’s son Brian, who has written many novels in the Dune canon.

It’s also worth noting that John Harrison, who wrote and directed the Dune mini-series, is also credited as a producer on the film.

If only they’d worked in a cameo for Kyle MacLachlan or even David Lynch to complete the circle. Perhaps they’ll pop up in the sequel, which is already in pre-production.