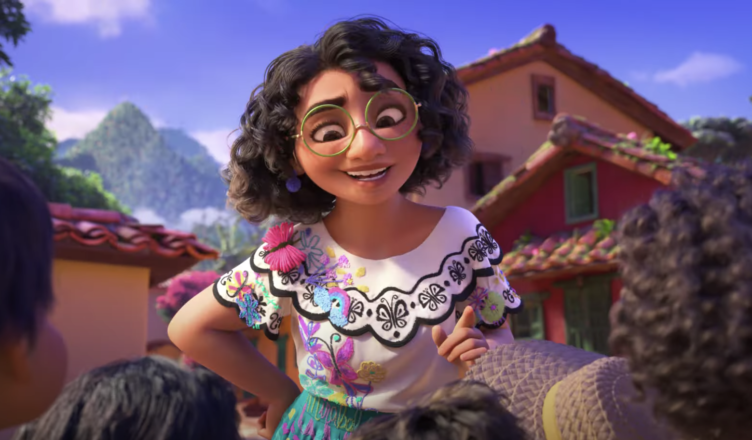 Magic time: Mirabel learns about the downside of magic in Disney’s ‘Encanto’.

ENCANTO ** (96 minutes) PG
It’s beautiful to look at, the animation is first-class, it’s full of lovely songs and quirky characters and magic, with positive messaging about community togetherness and family values and being yourself but, to be perfectly honest, the latest offering from Disney is, well, a bit of a bore.

One of the issues that has emerged with a lot of animated features of late is how they are all heightened in some way, with the story core typically involving something outlandish, weird or magical.

Encanto turns out to be so heightened, so crammed full of magic that it lacks any real punch or sense of consequence. There’s so much magic in the film you kind of get a bit magicked out.

Young Mirabel Madrigal (Stephanie Beatriz) lives in a magical house with a magical family where each person has a magic gift that they use to make life positively magical for the community that has grown up around them.

The magical state of affairs came about because of a magic candle that was used to protect the family when they were running from some ill-defined horseback-riding foe and lost a family member.

But while all her siblings and relative have special gifts of some sort, Mirabel doesn’t, making her different, though she is still much loved.

Less loved is Uncle Bruno (John Leguizamo), whose powers of foresight have estranged him from the family, though it’s never clearly explained why somebody with such an immeasurably valuable gift would be alienated. Surely you’d want to keep somebody who could see into the future close by, especially when it comes to filling out a lotto ticket or betting on a horse.

But can all this magic be too much of a good thing? Cue the movie’s message as Mirabel begins having disturbing visions of cracks appearing throughout the house, even though the palatial abode has the magical power to repair itself.

The strength of the magic that imbues the family seems to be waning. Oh no! What can be done? Can Mirabel do something about it? Something magical, even though she’s not magical? Or is she? Is there not magic within us all?

And so forth. Encanto has got to have one of the most abstracted narratives of any Disney animated feature, making it occasionally hard to follow and certainly difficult to relate to. Even some of the conceptually wackier films, such as Monsters, Inc, kept a foot on the ground.

There’s not much of a quest or sense of adventure involved in the story either, making it feel somewhat inert.

Thematically, the film beats the same drum as most kids films do.

Everybody has their own magic, the film champions, and you know the magic Encanto is talking about. It’s the magic that comes from – get ready for it – being yourself.

Just once it’d be great to see an animated family film that doesn’t feature this theme somewhere. Of course it’s important to be yourself yet, surely, there are times when being yourself can get you, and others, into lots of trouble.

And for all the splendour, colour and movement of the many songs in Encanto – written by Hamilton’s Lin-Manuel Miranda, no less – they go on too long and don’t really develop story or character, instead repeating in song what has already been established. Storywise, it’s just a lot of running on the spot.

You can literally pop out for popcorn or visit the lav and not worry about missing anything important. (In stark contrast, the songs in the upcoming musical-drama Dear Evan Hansen are deeply woven into the story.)

The magical setting of Encanto is Columbia, so the film is respectfully adorned with all the appropriate Latino costumes, architecture, décor and designs you’d expect, and it looks lovely.

But it’s just icing. What’s missing is any real sense of threat – aside from the possibility the magical house they live in might stop being so magical.

The strained charm of Encanto has that anodyne feel of a film too afraid to offend anybody. Nobody in the film is bad, just misunderstood. Sorry, but that’s boring.

Perhaps this is why the film has no real villain. Again, Dullsville.

Apologies for the laboured metaphor, but just as an oyster needs a grain of grit to make a pearl, so, too, a story needs a touch of the nasty to create tension and emotional engagement with its audience.

This actually puts Encanto at odds with most classic Disney animated features. Maybe the creators were eager to avoid that convention and do something different.

Unfortunately, it makes for a film that, for all its beautifully rendered bells and whistles, just isn’t all that interesting.