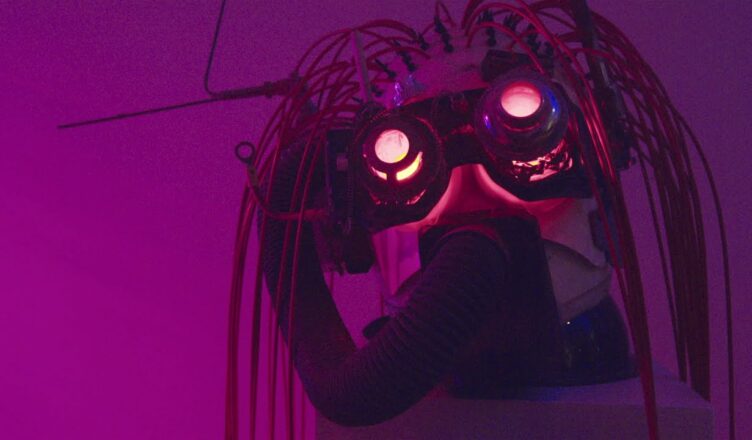 One of the stars of ‘Project Space 13’: “All good comedy is self-deprecating on some level,” says writer/director Michael Bilandic.

PROJECT SPACE 13 *** (67 minutes)
On the night his confronting performance art piece is supposed to be unleashed upon the art world-dwelling denizens of New York, Nate (Keith Poulson) has his big premiere ruined by a city-wide shutdown thanks to Covid.

As the city’s streets are overtaken by rioters, two over-equipped, under-trained security guards are sent by gallery owner Pieter (Jason Grisell) to protect the piece and the artist, who refuses to leave the cage at the centre of his tech-themed work.

Already angry over being denied his big night, Nate is edgy and eager to pick a fight with his protectors: Ace (Theodore Bouloukos) is a large, conspiracy-loving gent while Evan (Hunter Zimny) is a skittish newbie who lied his way into the job.

Confined mostly to the interior of the gallery, with occasional cuts to Pieter as he is driven through the torched city in his limo, the dialogue crackles with pop culture references, personal snipes and acidic exchanges about art.

Working on an obviously tiny budget and shot in six days, independent New York filmmaker Michael Bilandic creates a comic pressure cooker that takes some well-aimed jabs at the art scene and those practitioners whose self-importance sees the world around them as secondary to their artistic visions.

On the eve of the premiere of Project Space 13 Michael Bilandic was kind enough to hit Zoom from his couch in New York to discuss the film and one or two other things.

The film screens at the Roxy on 3 December, followed by a Q&A with the director and cast, and will stream on MUBI from 10 December. The Roxy is also screening Michael Bilandic’s other works. For tickets go here. Here’s the trailer.