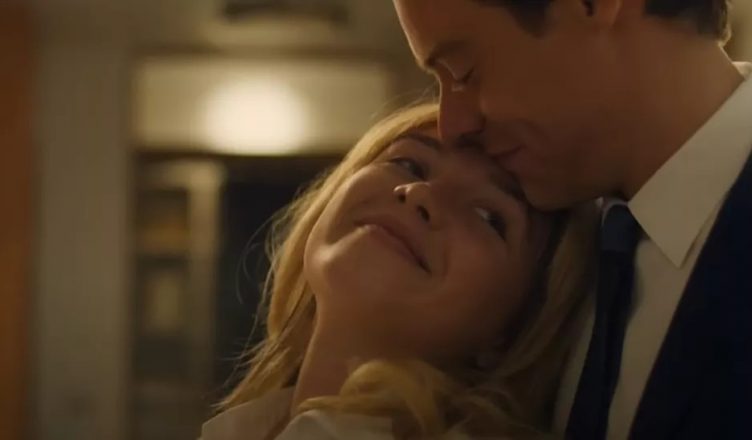 DON’T WORRY DARLING *1/2 (123 minutes) M
Unfortunately, Don’t Worry Darling, the much-hyped second film from Olivia Wilde (who did such good with BooksmartTwilight Zone episode at half-speed, the yarn is a dour dystopian drama set in the pastel-pretty 1950s town of Victory, a sun-drenched settlement sitting in the middle of a southern California desert plain surrounded by mountains.

The town’s beautiful, primly attired women live picture-perfect, strictly regimented lives that elicits nothing but gleeful, grateful smiles. No wonder, it’s a life of leisure, save for a few domestic chores.

Each morn they dutifully watch as their husbands drive off in their showroom quality cars to do their mysterious work for “The Victory Project” before retiring to attend to a bit of housework and a lot of day drinking as they gossip and pamper themselves in the sun or at the salon.

If only Alice (Florence Pugh) would go along with the program. After witnessing her neighbour acting strangely, she twigs that there might be trouble in paradise, in particular with Frank (Chris Pine), the town’s charismatic overlord, who behaves like a cross between a benevolent mayor and an expensive life coach. Hubby Jack (Harry Stles) ain’t too happy.

Sounds cool enough as a movie idea and it no doubt read great on paper. Sadly, the sluggish direction from Wilde (who appears as one of the beaming wives) burdens the proceedings with some terrible dialogue – brace yourself for the wince-inducing dinner party scene – and gaping story holes.

Though Pugh tries hard and has much to do in trying to hold the film together, her performance is often strained, especially when Alice’s suspicions spill over into strident self-righteousness.

It might well have a raft of “important” things to say about gender roles, sexual politics, the dreaded patriarchy and so forth, yet the film – written by Booksmart scribe Katie Silberman – is simply a languid dirge that becomes dull, a try-hard film that doesn’t ring the bell it’s clearly reaching for.

The recent run of premium horror films continues with Smile, a highly effective scarefest about a hapless doctor (Sosie Bacon) who fears she is caught in a gruesome cycle of death presaged by hallucinations. Strong on atmosphere, the film delivers a fresh take on psychological horror along with lots of good old-fashioned creeps.

ON THE COUNT OF THREE *** (86 minutes) MA
With their lives in the s-bend, pals Val and Kevin (Jerrod Carmichael & Christopher Abbott) decide to end it all, agreeing to enjoy one final day to bring closure to some important issues, secure in the knowledge that there will be no tomorrow, therefore no consequences.

A dark, diverting, surprisingly thoughtful squib of a film – it’s a sleek 77 minutes, sans credits – On the Count of Three is framed as a comedy while managing to get some worthwhile messaging under our guard. With neat bit parts by JB Smoove (Curb Your Enthusiasm) and Henry Winkler (The Fonz, as if you didn’t know), director Carmichael doesn’t let the mordant premise get too bleak as the pair face the harsh reality that comes with their pact. The film’s cautiously optimistic closing shot provides a clear idea of what the film is meant to be about, noting how wisdom sometimes arrives a little behind schedule.

* If the themes mentioned above cause distress please call Lifeline on 13 11 14 for confidential support 24/7.

THE HUMANS *** (108 minutes) M
A financially strapped, trouble-ridden family gathers for a tense Thanksgiving dinner in a sparse Chicago apartment they have just taken possession of for what is supposed to be a bonding experience. Simmering conflicts and judgements are slowly brought to the boil as family fissures deepen.

Keeping things downbeat, first-time director Stephen Karam, adapting his namesake Tony-winning play, elicits a batch of strongly understated performances and creates a pungent, naturalistic ambience by shooting the minimalist action from a distance, often from another room. Great use of a single location; a very good turn from Richard Jenkins as the father; fans of Amy Schumer will enjoy her straight work here.