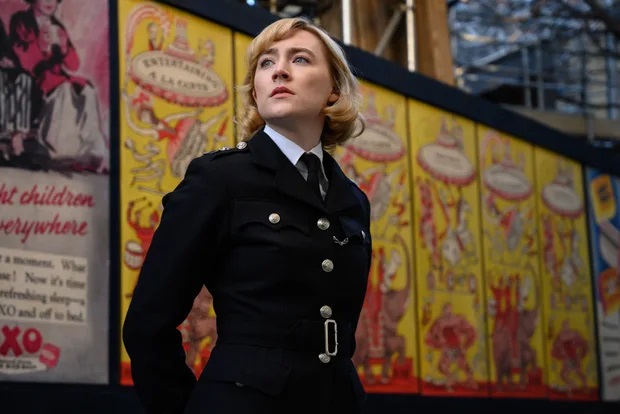 One moment, sir: Saoirse Ronan plays a naive pollicewoman in the crime-comedy ‘See How They Run’.

SEE HOW THEY RUN ***1/2 (98 minutes) M
Having great fun with the ancient formula of an old-fashioned whodunit is See How They Run, a very funny, cheerfully self-referential murder-mystery romp dripping with wit, one liners and a top-flight ensemble.

Set in the beautifully recreated world of 1953 London, the trouble begins in the West End with the backstage murder of Leo Köpernick (Adrien Brody), a loud-mouthed American director who has been commissioned to adapt Agatha Christie’s murder mystery stage hit The Mousetrap into a movie.

As they follow the tantalizing trail of clues, the proceedings are spiced by an all-knowing narrator who positively relishes in telling us all about the archetypes and beloved clichés of the time-tested murder-mystery template as they appear on screen.

Strewn with a few well-marinated red herrings and breezily directed by Tom George (from a screenplay Mark Chappell), See How They Run is an undemanding delight that rouses a sizeable fistful of hearty laughs.

The polished performances have just the right amount of comic conviction to keep what is essentially a nicely honed and distinctly affectionate tribute from stepping over the line into parody.

While Ronan does a sweet job opposite Rockwell stealing almost every scene she is in, the ensemble turns are universally strong, especially Harris Dickinson (impressive in Where the Crawdads Sing) who does sterling work as a young Richard Attenborough. It’s clear the guy obviously did his homework.