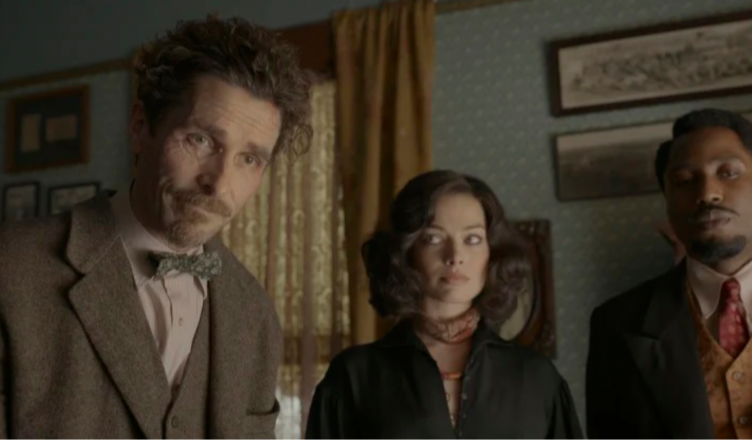 AMSTERDAM *** (134 minutes) MA
The best and fairest way to describe David O Russell’s meandering period murder-mystery Amsterdam is as a handsome ramble with a top-shelf cast putting in very good performances in the service of a rather ordinary plot.

As is often the case with movies, the journey we’re sent on in Amsterdam turns out to be more enjoyable, diverting and satisfying than journey’s end. That said, it does nonetheless involve a fascinating footnote in American history, a little-known event in the 1930s where an attempt was made to befoul American society with a form of government that was becoming very popular throughout Europe.

As with American Hustle, Silver Linings Playbook, The Wrestler and Joy, Russell again demonstrates with Amsterdam what a fine actor’s director he is, presenting a premium performance package from a palpably enthusiastic and convincing ensemble.

Great War veteran Burt Berendsen (Christian Bale) works as a doctor helping those wounded in the war with prosthetics and masks. He himself copes with a badly injured back and has a glass eye. His fellow vet Harold Woodsman (John David Washington) works as a detective.

Upon the sudden death of their decorated field commander and respected senator Bill Meekins (Ed Begley Jr.), both are called in by his daughter Elizabeth (Taylor Swift), who suspects foul play and commissions them to investigate.

Their involvement in the case quickly deepens when a mysterious assassin (Timothy Olyphant) pops up and they become implicated.

Suddenly lane-switching out of murder-mystery mode, a prolonged flashback guided by Berendsen’s fruity narration fills in the battlefield backstory, bringing in trauma nurse Valerie Voze (Margot Robbie), with whom they form an intimate, though strictly non-sexual, bohemian friendship in Europe after the war before losing touch upon their return home.

As the two men desperately attempt to clear their names in pursuit of Meekins’ killer, Valerie re-enters their orbit and joins them in their investigation, which begins pointing to the dark political forces attempting to wreak haoc on the American way of life.

Very gradually the discursive nature of the narrative coalesces into a fairly conventional plot-driven yarn, bringing the diverse roster of characters together for a so-so payoff. Fans of Russell, though arguably few else, will forgive the film’s as-you-please pacing and relish the rich performances and production values.

It needs to be stressed what a luminously beautiful film Amsterdam is to behold; the set design drips with detail while the exterior backgrounds of buildings and streets bustling with traffic drip with period detail and often stretch back for blocks.

Fans of cinematography will note how these aspects are kept casually in the background, as they should be, highlighting again that delicious irony of a huge production effort being put into visual elements that are designed to be registered only out the corner of the eye as you pay attention to the action front-and-centre.

Alas, for all its loveliness and roundabout storytelling, Amsterdam is an acquired taste – and it appears not a lot of reviewers are acquiring it. The early wave of reviews, at least, have been somewhat harsh.

But sit back and key into the film’s rhythm and you’re likely to enjoy its oddball buffet of offerings.

For decades the Melbourne comedian and filmmaker has deployed his ethnic-based comedy to smash stereotypes, ridicule racism, promote cultural inclusion and embrace tolerance.

He helped turn the term “wog” from a slur to a totem of triumph and his massive hit 2000 film The Wog Boy has, to the irritation of many, become an Australian comedy classic. Its 2010 sequel, Wog Boy 2: Kings of Mykonos, was also a hit and did about half as well, which is still a lot.

So, for the record, it’s a hearty and heartfelt Mazel Tov.

The advent of Wog Boy 3: Wog Boys Forever, however, is not so much a cause for celebration as consternation. It’s laboured, thinly directed and features messaging that is as well-intentioned as it is clumsy, tacked on in awkward speeches and monologues rather than infused as part of the story.

Saddest of all, it’s not very funny. There are a handful of good moments, but there are too many stretches tghat have you wishing the thing would just move faster.

The film finds our Wog Boy hero Steve Karamitsis (Giannopoulos, who wrote and produced; Frank Lotito directed) down on his luck. He’s driving a cab, lives in a converted garage, is single and cash-strapped. He’s lost his beloved 1968 Valiant. Even his “wog boy” cache has gone.

Meanwhile, his former bestie Frank (Vince Colosimo) is thriving. He owns a string of pizza shops, lives in a McMansion with a lovely wife and drives a series of flash cars.

Steve visits to try and mend things, which goes reasonably well with Frank pushing Steve to pursue old flame Cleo (Sarah Roberts), who had hopped into his cab earlier that day.

As well as exacting revenge on him for her mum, Brianna plans to exploit Steve for her own political purposes that, of course, have an anti-wog agenda. Her red hair signals that she is possibly meant to be a lampoon of Pauline Hanson.

Put politely, Wog Boys Forever is a mess, serving as yet another recent Australian film to show symptoms of the issue that dogged so many films of the 1980s and 1990s – namely, that it appears to have gone into production several screenplay drafts too early.

Though it’s not exactly incoherent, the film’s narrative is a jumble of storylines, some of which are left unresolved or are simply forgotten. For what is supposed to be a knockabout comedy, lots of questions are left unanswered, lots of loose ends left untied.

Coupled with all this, the film is over-long and under-directed. Performances are all over the place, the story moves in fits and starts, the film’s comic energy spikes, then lags, with some scenes going on for an inordinate amount of time.

A sore example occurs at the nightclub doorway, which goes on for so long it starts feeling like a Franz Kafka parable. Once we get inside we spend ages there, all for the sake of a few awkwardly assembled story points and a contrived opportunity for Giannopoulos and Colosimo to do their disco dance schtick, purely for old time’s sake. Even the editing here is ordinary.

The film feels like it could have benefitted from another pass or two through the editing console and perhaps some narration to at least explain what happened to the characters who, having been presented as emblems of Australian values, suddenly vanish from view.

Still, the Wog films have their fanbase. The prediction here is that Wog Boys Forever will enjoy a very strong opening before lukewarm word-of-mouth gets out.

UNDER COVER ** (91 minutes) PG
Mentioned many times throughout Sue Thomson’s sad documentary Under Cover is how women over 50 make up for the fastest growing part of Australia’s homeless. Several are profiled, the most heart-rending being those who have fallen victim to cruel circumstances, forcing them to live in cars or tents or flats they got through good fortune.

They understandably get most of the attention on screen, yet the work being done to address the situation should have been more than touched upon. The segment showing how empty houses are offered as a temporary fix is a heartening but all-too-brief ray of hope in an otherwise maudlin film that carries an overwhelming sense of resignation, something reflected in the wan narration by Margot Robbie.

The film could have done with being a lot less polite and alot more angry.