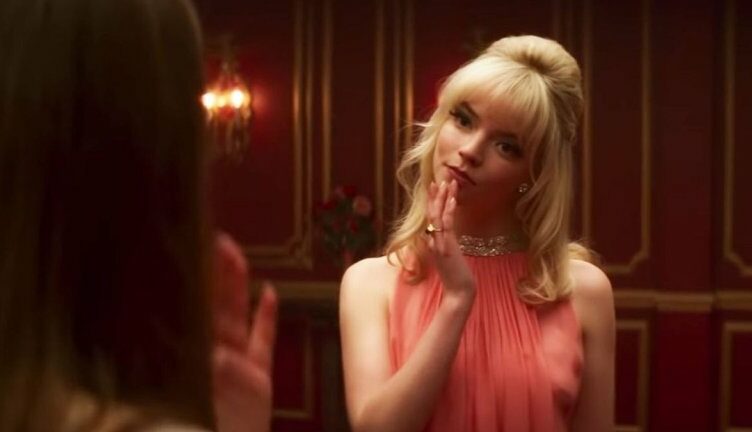 Having lived a bubble-wrapped life with her loving grandmother Peggy (Rita Tushingham) for exactly too long, eager, naïve young Ellie (Thomasin McKenzie) steps into the wilds of modern London to attend a hard-won fashion design course.

Though hungry for experience, she’s a vulnerable and sensitive soul, her grandmother’s advice to watch out for herself and avoid troublesome types prompting Ellie to move out of her party-hard dormitory and check in to a private room in a house run by the prehistoric Alexandra Collins (Diana Rigg).

In a comforting coincidence, her room looks like it hasn’t changed since the late-1960s, an era Ellie has great affection for thanks to her grandmother exposing her to the period through anecdotes and a great collection of albums.

Thus begins a series of luminous lucid dreams that transport Ellie into the very heart of London in its folkloric Swinging Sixties heyday.

In the bustling streets and nightclubs – all sumptuously recreated – Ellie takes on the form of Sandie (Anya Taylor-Joy from The Queen’s Gambit), a beautiful blonde who aspires to be a club singer.

She hooks up with the devilishly handsome Jack (Matt Smith) who becomes her protective boyfriend and manager, setting Ellie on what she believes will be a thrilling romance in a glorious, glistening city throbbing with classic music and boundless promise.

In real life, Ellie distinguishes herself in the classroom with her throwback designs and begins a friendship with classmate John (Michael Ajao). Inspired by her dream avatar, she dyes her hair blonde and becomes more self-confident.

The vivid dreaming continues, but the romance and bright lights take a dark turn as Sandie becomes ensnared by the salacious side of club life in 1960s Soho.

These disturbing episodes and those who populate them begin appearing as visions in Ellie’s actual reality, pushing her to investigate who her dream self actually was, and what became of her.

Though Wright ultimately turns to a carefully selected clutch of genre conventions in the film’s third act he pulls off a highly diverting and unusual premise with great panache and style.

With a diverse CV that includes Shaun of the Dead, Hot Fuzz, Scott Pilgrim Vs the World and Baby Driver, Wright’s command over visuals has become ever more striking, with his use of mirrors early in the film bordering on brilliant.

The film also serves as testament to the extraordinary ability modern filmmakers have to recreate periods of which they have no personal experience. Wright was born in 1974, yet the film’s sixties sequences breathe with the texture of somebody who lived through it.

Even the film’s quieter personal moments have the feel of British films from the decade. The depth of research resources available today probably account for the high degree of authenticity – though an idle thought wonders why Wright didn’t shoot some of these ’60s scenes in black and white.

With a to-die-for soundtrack of pop hits from Petula Clark, Cilla Black, Dusty Springfield, Sandie Shaw, Barry Ryan and many others the film at first celebrates through some glorious production effort the warmth, beauty and elation of nostalgia.

Yet its power to enchant and enthrall flips once the rose-tinted filter is removed, a theme Wright (who co-wrote the screenplay with Krysty Wilson-Cairns) judiciously develops here, neatly echoing the idea Woody Allen cogently explored in 2011’s Midnight in Paris.

Spiced with the tribute casting of such Sixties’ icons as Terence Stamp, Rita Tushingham and Diana Rigg – giving sterling support to the excellent lead turns – the film is a perfect example where the journey turns out to be more bewitching and seductive than the actual destination, satisfying though it is in how it ties all the film’s mystery elements into a very attractive bow.