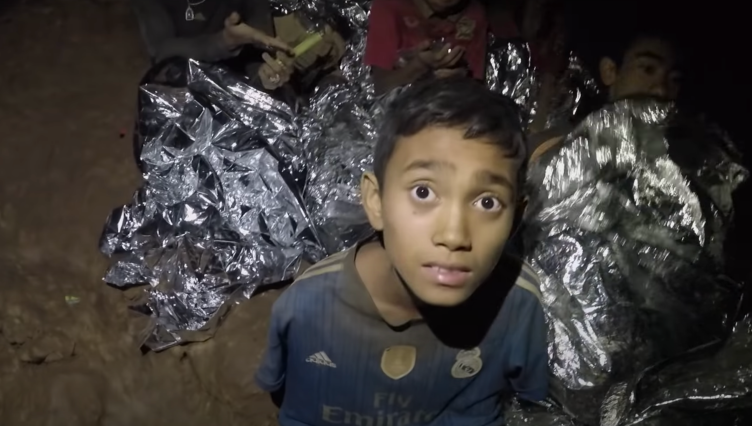 Glad to see you: One of the boys trapped in a Thai cave in the documentary ‘The Rescue’.

THE RESCUE ***1/2 (107 minutes)M
We all know how it ends and we all know how it begins. What the excellent, absorbing documentary The Rescue does is fill in all the details about the 2018 recovery of 12 Thai boys and their soccer coach who found themselves trapped deep inside a cave once rising waters blocked their exits.

Combining spools of news footage from the blanket media coverage – it seems everybody was there – with some unobtrusive recreations and wily use of computer graphics, directors Jimmy Chin and Elizabeth Chai Vasarhelyi present an exacting, vivid chronology of the mission, including some surprising admissions from the divers who were hailed as heroes.

Calling upon the skills and experience of those brave, eccentric souls who cave dive for fun, we discover how quickly they saw the situation as a disaster with little to no hope of finding the trapped alive. It’s not often we see heroes confessing to shame over their behaviour, and it’s one of many memorable moments.

Perhaps the most unsettling is the confession from Dr Richard Harris. He initially balked at the suggestion of the divers to sedate the boys before carrying them underwater, but reluctantly went along with the plan.

On film we see him injecting boys before putting on their masks for the perilous journey. His description of how he felt about his role is, to put it mildly, disturbing.

Such faith in hope overruling gut feeling largely underscored the massive logistics of the operation, and was key to its eventual success.

While the rescue involved the efforts of thousands of people, Thai SEALs, hundreds of tonnes of pumping equipment, specialized diving apparatus and hefty assistance from the United States military, the film places heavy emphasis on the spiritual attitude that permeated the event.

Religious belief might not be able to stop a pump from breaking at a critical point, or save the life of a diver who runs out of oxygen – the death of retired Thai SEAL Saman Gunan is given respectful due – but the film shows how, in this case, it fortified the collective resolve to not only recover the trapped boys, but to get everyone out alive.

If Free Solo tapped into our shared acrophobia as it showed a climber attempt to scale the sheer rockface of El Capitan in Yosemite National Park, the directors here do a frightfully effective job exploiting our collective claustrophobia.

A 3D computer-generated map illustrating the long and winding route of the Thai tunnel is continually referred to as the progress of the mission is detailed.

Combined with real and carefully recreated footage, it creates a vivid impression of narrow passageways, tight crevasses and the every-present threat of water. It’s tough viewing for anyone with an aversion to being closed in.

Though the film covers quite a lot, including the mindset who find the dangerous pursuit of cave diving so soothing, it doesn’t cover everything.

For instance, there’s no mention of Thai SEAL Beirut Pakbara, who died a year after the rescue from a blood infection he caught during the operation.

Then there’s that wholly regrettable incident with space pioneer billionaire Elon Musk, who reacted rather badly when his offer to provide an unusable mini-submarine was turned down.

Admittedly, the latter matter – involving an unattractive online spat and ugly defamation case, which Musk won – is probably too tangential to the story the film is wanting to tell.

Still, a closing caption could have covered the former as a belated salute to one of the mission’s neglected heroes.