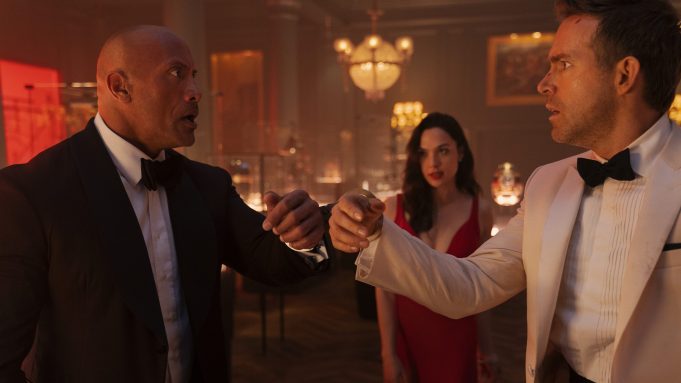 RED NOTICE *** (117 minutes) M
Some great action camerawork and a few neat twists help spice up a cartoonish, big-scale action bash about competing art thieves in search of an ancient Egyptian egg that will complete an invaluable trio.

Ryan Reynolds, in a clownish, goofball performance utterly indistinguishable from his last five films, is a wise-cracking art thief forced into collaboration with an FBI profiler played by Dwayne Johnson.

They’re up against a rival art lover, portrayed with surprising wit and unsurprising pulchritude by Gal Gadot (Wonder Woman).

A high gag quotient (mostly curse-free, thankfully) and zippy pacing from writer/director Rawson Marshall Thurber (Dodgeball; Skyscraper) mark Red Notice as a pleasing assembly-line time killer that upshifts when the action kicks in and the camera takes on a life of its own, aided no end by some exceptional editing.

Gadot shines as an action-movie bad girl, especially when presiding over a torture session armed with electrodes and, in a prolonged homage to Indiana Jones and the Temple of Doom, Red Notice goes out of its way to pay tribute to the reliability of German engineering.

Also, here’s something special: note how tenacious the security guards are here, showing their counterparts in the otherwise terrific Bond film No Time To Die how it’s done, proving that action sequences works better when these minions make for tough opponents to the headliners.

Important footnote: The release pattern for Red Notice, a major enterprise that cost about $150 million, saw it get a brief showing in cinemas before splashing into the stream, where it has hit huge.

This is quickly becoming the standard release model for many big films, presumably because the mass audiences such films need to rake in the grosses and spawn a sequel are becoming easier to access online than through the box office.