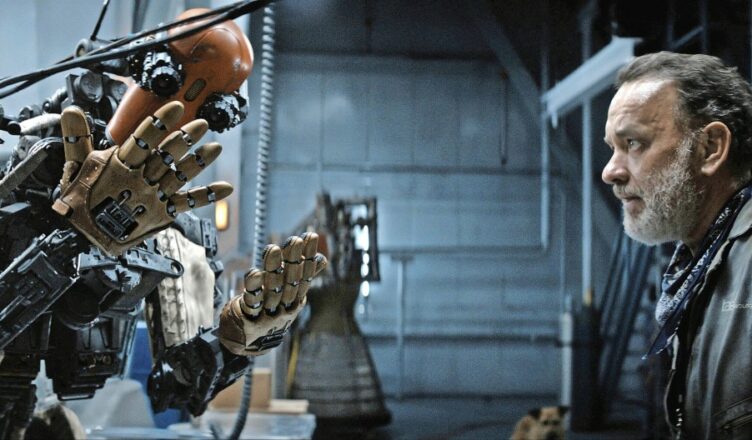 Robot love: Tom Hanks plays an engineer who must humanize an android in ‘Finch’.

It’s a theme that has been evolving for as long as dog movies have been around, though at a slower pace, given how robots are less prone to be “man’s best friend” given their tendency to turn on humans as we’ve seen in Metropolis, 2001, The Terminator,

Finch fits in with those films that show the nicer, kinder side of robots – Bicentennial Man, Short Circuit, Silent Running, A.I., Wall-E, Interstellar) – though the droid featured here, named Jeff, is more anthropomorphized than most – so much so we see his chest heave, as though he can breathe.

Looking and sounding much like he did in Castaway, Tom Hanks plays the titular character, an engineer surviving in a devastated, depopulated Earth scorched by a solar event that has long rendered much of the planet’s surface uninhabitable and inhospitable to everybody not wearing a protective suit.

Alone in his well-appointed, well-protected laboratory, Finch constructs a robot that he programs for one mission – to take care of Goodyear, Finch’s beloved dog and the love of his life.

Finch already has a trusty little cuboid helper robot called Dewey – named in tribute to the helper droids in Silent Running – but he needs a more nimble, human-like creation to take proper care of his pooch.

After a decade Finch is not in the best of health and with a killer storm heading his way, he gets everybody into a customized motor home and heads for San Francisco.

And it’s quite a smooth ride, relatively speaking.

The sun is punishing, the weather’s cataclysmic, the wind so powerful it’s enough to send your hat flying off into the air, but other than that the post-apocalyptic wasteland featured in Finch is fairly tame compared to the afterworlds we’ve seen in such films as The Road, The Book of Eli, Mad Max 2,3, &4, A Quiet Place, Planet of the Apes, and so forth.

That said, the focus here isn’t action but the bonding between Finch and his robot, which grows increasingly sentient as the film progresses.

Ably directed by Miguel Sapochnik (Game of Thrones) it makes for a fairly engaging buddy film, with the visual effects responsible for Jeff hitting a new peak in photo-realism.

The big sell, though, is the thoroughly convincing turn by Hanks who, at this point in cinema history, has proved himself the best key-screen actor around. It’s his interaction with Jeff that truly humanises the robot rather than the quality of the VFX, super though they are.

Hanks’ affecting turn in Finch furthers the claim that he embodies the plight of the everyman, however grounded or extreme the scenario.