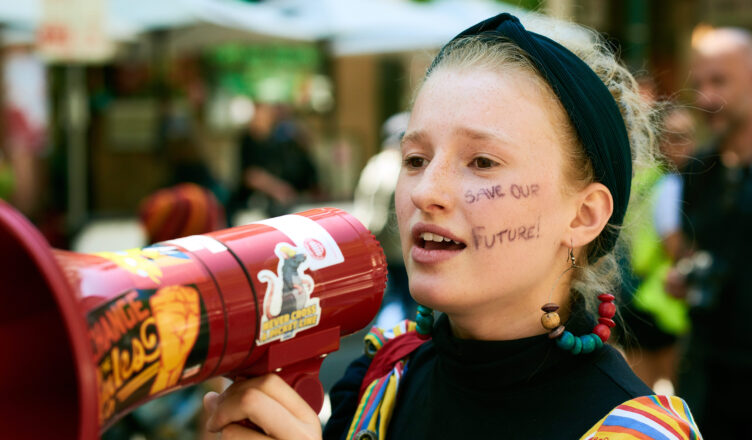 Sign of the times: Different aspects of the protest movement are covered in ‘Wild Things’.

WILD THINGS **1/2 (89 minutes) M
Regardless of whether or not you actually agree with whatever their cause is, you can’t help but admire that special breed of protester whose conviction pushes them to extreme acts of daring, such as camping at the top of a tree, chaining themselves to a bulldozer, standing in front of a truck or – if they’re really willing to risk it all – take a day off school without a written note from their parents.

The passionate end of the protester spectrum is explored and duly captured in Wild Things, a valentine of a documentary by veteran filmmaker Sally Ingleton, whose formidable CV includes the excellent 2003 documentary Muddy Waters, about the demise of the Great Barrier Reef.

Covering the course of a year or so, the film follows protests at the Tarkine forest in Tasmania, the Adani coal mine in Central Queensland and the nationwide climate change demonstrations by school students.

The film makes no bones about who the heroes are, or what its purpose is, which is to promote activism.

Nothing wrong with that, in principle, but with yin there must come yang and there is just too little coverage about the realities of those on the other side of the protest line.

There are brief encounters with police, truck drivers and angry locals that offer glimpses into what the other side of the story is, but one is left wanting more about them and why they want something built or cut down, and less about what modern-day martyrs these protesters are.

There’s no faulting the film for bottling the passion of people who are willing to defy big businesses and the law, and there is a good deal of stereotype-busting as we learn that some protesters do have day jobs and families.

Perhaps the most questionable aspect of Wild Things is its glamorization of protest, especially to young people who, it could be argued, are more susceptible to be drawn in by the romance of protest without fully registering the downside.

One telling moment shows a police officer challenge two protesters, one of whom is chained to a gate, the other standing nearby to offer support. Once the issue of arrest is raised, however, the chained protester is willing to risk it while the other backs down.

The issue of what you risk when you are prepared to be arrested for your cause is a key one, especially in the context of the Greta-inspired youth protesters the film lovingly devotes so much time to.

Unfortunately, it’s not canvassed, and while the teen protesters are portrayed as future leaders-in-training, no hard questions are asked of them, no challenges made.

Visually Wild Things is strong, and features a chapter on the history of the protest movement and how much harder it was back in the days of the Franklin River Dam action (circa 1978-83) to get media coverage.

In fairness, the film does show protesters being sensible as well as daring, moving on when directed by police, ending a protest line once the point has been made.

One just wishes the film was more rounded, and perhaps a bit more circumspect.

As it turns out Wild Things could have incorporated more about “the other side”, as writer/director Sally Ingleton explains in a lengthy sit-down to discuss the film.

Having notched up 35 years in the game, Sally Ingleton is one of the most dedicated and respected documentary directors and producers in the country.

Here she talks about the making of Wild Things, explains its intent, agenda, production, funding and addresses some critical observations.