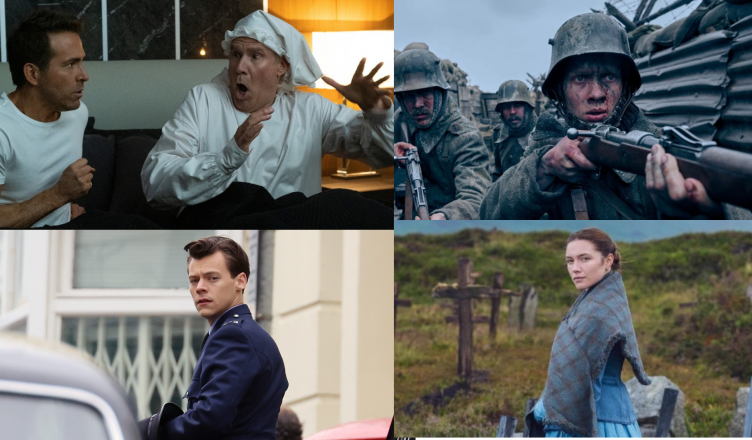 From top left: ‘Spirited’; ‘All Quiet on the Western Front’; ‘My Policeman’; ‘The Wonder’.

SPIRITED **** (127 minutes) PG
Likely to be the most pleasant shock you’ll get during the 2022 festive season, Spirited presents a deliriously inventive, funny and heart-warming musical reworking of A Christmas Carol, the 1843 Charles Dickens classic that has proven to be one of the most remarkable and remakeable stories in literary history.

Working for Briggs is Kimberly (Octavia Spencer), a dirt-digging underling whose kind heart puts her conscience in a state of constant turmoil. Her road to change is also attractive to Scrooge, whom he also finds attractive.

The breezy direction by Sean Anders, who co-wrote with John Morris, boasts both a sparky comic zing – with Reynolds and Ferrell joyously bouncing off each other – and shows a deep love for large-scale musical numbers involving sweeping camera moves and dozens of participants. Of the many highlights studded throughout the film, the most impressive involves the synchronized movement of lights strapped to the arms of dancers. It’s wonderfully inventive stuff.

Given all the Christmas pap that presented to us each year, Spirited really rings the bell.

It also serves as another demonstration of how the best adaptations of classic material rethink the story from the ground up while maintaining the integrity of the original concept.

All the values that make A Christmas Carol such an enduring story are baked into Spirited, only they’re now framed with lots of boisterous movement and singing.

As for Ferrell, he’s already got one Christmas classic on the board with Elf. This looks likely to boost his annual royalty income.
AppleTV+

ALL QUIET ON THE WESTERN FRONT ***1/2 (147 minutes) MA
Though no remake can reasonably be expected to match the raw power of the seminal 1930 epic by the great Lewis Milestone (whose contribution to early cinema deserves renewed recognition), the newly-minted German version of All Quiet on the Western Front is nonetheless an excellent, vivid anti-war tract about a young soldier’s experiences across the murderous European battlefields of the First World War.

Tracking the journey of a young recruit Paul Bäumer (Felix Kammerer), whose wide-eyed patriotism for the Fatherland is quickly blooded once he hits the trenches, the film features some sprawling, graphic battle sequences that bear the influence of Steven Spielberg’s Saving Private Ryan.

One especially harrowing segment heralds the introduction of tanks to the battleground highlighting both their brutal killing power (including the effects of their tonnage on soldiers caught under their tracks) and their vulnerability.

Without relent, the film details the gruesome realities of what those battlefields were like – pitted with bomb craters, cluttered with barbed wire and debris, swarming with hungry rats, populated by frightened young men facing imminent death and, perhaps most gruelling of all, strewn with corpses embedded in the mud. This is a stomach-churning, historically accurate point 1917 also put into the face of viewers.

As vast and impersonal as the action often is, with men charging and falling en masse before chattering machine guns, much emphasis is put on the horrifically intimate nature of hand-to-hand combat.

It’s in these scenes where the war and all its politics are reduced to two men desperately trying to kill each other.

The story is set mostly in the final days of the war when Germany was under huge pressure to agree to unconditional surrender (which ultimately led to World War II) and a maniacal hunger prevailed to get in one more fruitless confrontation a few minutes before the Armistice at 11am.

Directed with a mixture of grim grandeur and solemnity by Edward Berger, this version honours the original film by keeping any sense of glory or triumph out of the intricately mounted battle scenes, all of which are designed with the singular purpose of recreating the scale of the slaughter on a front that barely moved in four years.
Netflix

MY POLICEMAN ***1/2 (114 minutes) MA
The ghastly time gay men endured in Britain during the post-war era is potently evoked in My Policeman, a finely etched relationship drama set at a time when homosexuality was illegal and violence against them almost became a sport.

Strong performances all round, especially from Linus Roache as present-day Tom, offset the familiarity of the scenario, which has been covered in such fine films as Wilde, A Single Man and, of course, The Naked Civil Servant.

Take note that while My Policeman is a good film, it’s not exactly uplifting. Be prepared to get misty-eyed, but don’t fault yourself if you do.
Prime

ORGASM INC: THE STORY OF ONETASTE *1/2 (90 minutes) MA
Big on claims but short on proof, Orgasm Inc is a documentary that raises too many questions and provides too few answers in its pursuit of the women behind OneTaste, a cult-like San Francisco sex and wellness organisation headed by camera-loving business woman Nicole Daedone. She’s a charismatic, elusive figure the film can’t quite nail.

The outfit milked millions from people, made light of rape and ordered people to have sex with each other, prompting complaints from former members and an FBI investigation.

Yet it still commanded many loyal participants who give on-camera testimony about how great it was having access to so many willing partners.

Produced by Lena Dunham (Girls), the film’s meandering nature and closing captions suggest the filmmakers should have kept at it a while longer before hitting the editing console.
Netflix

THE WONDER * (108 minutes) M
Nurse Elizabeth Wright (Florence Pugh) heads to a small remote village on the windswept plains of Ireland, circa 1862, to watch over a girl who claims not to have eaten in four months, despite looking perfectly healthy.

It’s resoundingly dull period twaddle with Pugh’s threadbare performance bordering on stony, the theme of science vs custom underscores the thin story. Yet the big question isn’t what is going on but, well, who cares?

The equally dull cinematography features plenty of those magic-hour landscape portrait shots where the horizon divides the frame, usually with small figures and houses in the foreground to lend a sense of scale. Yawn.

The one distinguishing feature of the dirge is its ever-so-artsy bookend sequences, which are exceedingly pretentious and seem like an idea that was thrown in at the last minute.
Netflix