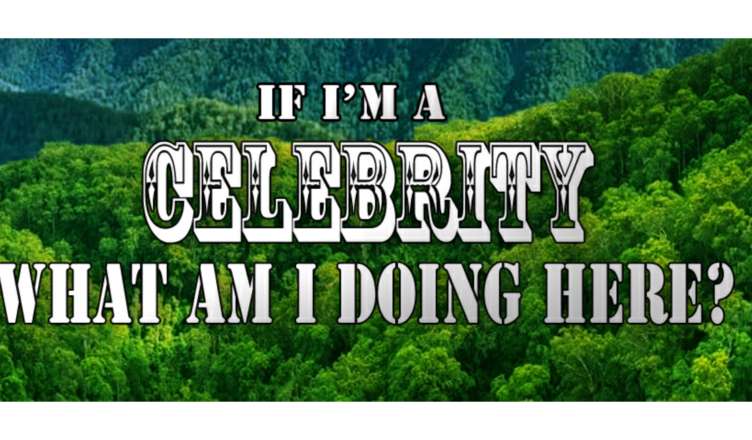 The Jungle Calls: The famous fight it out and learn life lessons in ‘I’m A Celebrity…etc’.

Wow, what an absolutely great line up they’ve assembled for the latest season of everybody’s favourite reality TV program If I’m a Celebrity, What Am I Doing Here?, the only program on Australian television that’ll make you laugh, cry and squirm so much you’d think you were watching an episode of award-winning ABC-TV comedy.

All credit to the Celebrity producers for wrangling such a fascinating and diverse pool of incredibly interesting people to compete in the wilds of the jungle, a place as predatory and hostile as any HR department.

And what a thrilling, incident-packed week in the jungle it’s been! All those clashing personalities and dangerous tasks as the celebrity contestants bravely faced all manner of fear-inducing challenges, putting to the ultimate test their fortitude, will power and their all-powerful desire to be on telly.

How nail-biting it was when Allegedly Famous Person You’ve Never Heard Of confronted their deepest, darkest fears in the Pit of Putrid Poo. It was enough to make you text “OMG!!! Did you just see that???” to somebody who was right in the middle of dinner.

They would have torn each other’s head off were it not for the calming presence of Motormouth Ex-Politician Fatally Addicted to Media Coverage, who has proved the true saint of the show thus far.

Almost topping that was learning how Whacky FM Radio Host Who Is Even Less Funny In Real Life finds eating roasted cockroaches with maggot sauce repulsive. That didn’t stop them, though. Ewww! What a classic moment.

Speaking of extremes, being immersed chin-deep in The Volcanic Vat of Vomit was Millionaire YouTuber Who Does Nothing But Laugh At Other People’s Videos, who almost said the magic words that could have instantly freed them. Still, they stuck it out even though the ordeal must have been worse than being demonetized.

One of the most intense moments of the show so far occurred during the dreaded Shocker Locker Challenge when Long Forgotten Variety Host Hoping For One Last Shot at the Spotlight was given an impossible choice: be shut in a solid steel box for an hour with 10 venomous spiders or listen to a five-minute routine from Woke Stand-Up Comic Who Takes Offense At Everything.

The segment proved to be a sober illustration of how difficult some of life’s choices can be. From the spine-chilling screams of anguish and howls of extreme pain it was clear they should have gone with the spiders.

Who could have guessed the first person voted off the show would be Once Loved Children’s TV Host Caught Out for Over-Sharing Holiday Selfies, especially after they offered all the other contestants participation in their time-share business? Just goes to show how fickle the public can be.

And talk about cat fights! It was positively frightening when Winner Of Miss Something Or Other found out her food was being stolen by Internet Famous Blogger Who Has Never Done Or Said Anything Remotely Worthwhile.

They lunged at each other and it was riveting television, even as Local Actor Who Had a Tiny Part in a Big Hollywood Movie But Has Done Nothing Interesting Since tried to intervene and ended up with a scratched retina. That’ll teach him to mind his own bee’s wax.

It’s so good to see Very OId Person Who Only Very Old People Have Ever Heard Of back in action, even though they spend most of their time in the jungle sleeping.

That classic moment when they fought with Ex TV Chef Who Used to Have Their Own Show about whose bunk was whose delivered a stark illustration of how the celebrity pecking order works.

Still, the show isn’t all about confrontation and facing the dangers of the jungle in the presence of several dozen safety officers and trained medics.

It was so refreshing to hear Well-Established Media Personality Doing This For God Knows Why tell Notable Athlete Who Should Get Better Career Advice that their views on various hot-button topics had mellowed over the years. It demonstrated one of the core values of the show, about how we all can change.

Still, it was pleasing to see someone who hadn’t changed, namely Sitcom Star From 50 Years Ago who showed us all they’re still full of vim and vigour, especially when explaining to Unfunny Young Comedian Hoping For a Fast Way to Boost Their Profile how rich they would have been by now if only they knew back then what a back-end deal was.

Thus far the show has had more than its fair share of surprises – both for us and the celebrities!

How sad it was to witness Somebody We Haven’t Heard From In Years And Who We All Thought Was Dead touchingly admit to Extremely Rich Business Person Who Knows Free Publicity When they See It about how they once dabbled in something slightly illegal way back in their youth.

It was the first time they’d fessed up in public and you could really feel their pain.

There were splashes of meme-inducing champagne comedy that showed how even celebrities are human after all.

You could cut the tension with a knife when Faded Media Hotshot Who Fell Off The Radar Then Became Born-Again Famous When They Appeared On A Reality TV Show had to tell Hot Soapie Starlet Who Is There To Lure The Young Male Demo that what she thought was a mole on her left buttock cheek was, in fact, a tattoo of Dr Phil.

Turns out she had it done five years ago while drunk during a hen’s night. Talk about ROFLOL! Loved how the clip went viral and nearly broke the internet!

And the look on the face of Mystery Intruder Who Turned Out To Be Some Loser From A Failed Drama Series when they found out the Top Secret Mystery Box contained not the emergency food rations they needed but an 8-track cartridge of Lover Boy: The Singles Collection. Oh, the disappointment! And they thought The Hole of Halitosis was bad!

Romance-wise it was a five-alarm wake-up call for Former Sidekick From A TV Quiz Show Nobody Remembers when she discovered that Buff Gym Franchise Owner With Big Social Media Numbers wasn’t all that into her, and for no particular reason. She cried so long and so hard the supervising producers had to have signs set up warning people not to step in the puddle.

As thrilling and enlightening as the show has been so far what, pray, do the next few weeks hold?

Will Hard-line Media Commentator With a No-Nonsense Stance on Immigration ever reconcile with Ageing Liberal Pop Singer With Street Cred and finally learn the value of co-operation when they face the Tarantula Dropping on My Head Challenge?

What shall be the outcome when Sexy Young Influencer Who Looks Super-Cute in a Micro-Bikini But Has No Other Discernible Talents locks horns with Weather Girl from Obscure Rural TV Network Who Went Viral With a Wardrobe Malfunction And Now Has Her Own Cosmetics Line?

There’s so much more to look forward to as each elimination voted on by the viewers at home brings us all closer to the Big Questions: Who will survive in the jungle? Who will make new frenemies? Who will be eliminated?

Above all, we’ll be watching to see which of our esteemed celebrities shall emerge from the jungle as better people – grateful for the experience, validation, humility and career salvation only a TV reality show that locks people’s heads in a box of snakes can provide.

We can only hang with bated breath to find out the anwsers to these important questions.

If I’m a Celebrity…What Am I Doing Here is currently screening.