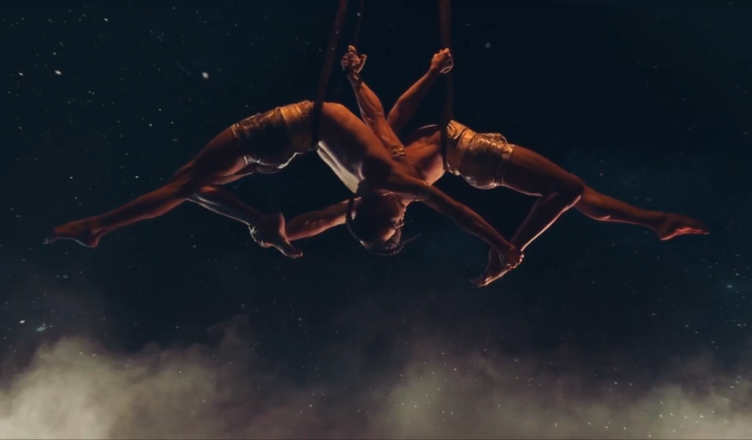 Up in the Air: One of the stunning aerial acts in the stage show ‘Oracle’.

ORACLE: Playhouse; Arts Centre Melbourne; Thursday 6 January, 2022
Perhaps the quickest and most accurate way to describe the full-frontal sensory assault of the crowd-pleasing, adults-only, Zodiac-themed, incredibly loud Oracle is to imagine a clutch of top-line circus acts melding with a meeting of the Pan-Dimensional Mystics Society Dance Troupe – and a few smoke machines.

Or you can just read the warning sign as you walk in: This performance contains fire, haze, partial nudity, strobe, adult content and occasional coarse language. Yeah. And then some.

Designed as a house-filling crowd pleaser, there’s lots of good-natured crowd baiting as people are encouraged to clap along, swoon and shout out to supplement the spectacle of music, dance, acrobatics and more stage smoke than we saw in the second half of Apocalypse Now.

Set around the columns of a classic Grecian temple, the gist of Oracle, written and directed by Bass Fam, involves a journey through the ancient myths and legends explaining the backstory to each of the Zodiac signs.

Earnest narration and a large roster of pop songs boom across the auditorium as the stories play out through a procession of intricately choreographed dance pieces and gob-smacking circus acts, all set to a cracking pace.

Especially impressive is Adam Malone (Aries), who performs an extended piece twirling and juggling a series of golden hoops, often on one hand and with an agility that is mesmerizing.

To state something that is obvious within the opening minutes of the show, the performers in Oracle can’t be faulted for slacking off on their exercise regimens.

There’s more musculature on show in this show than in a 1980s workout video. And, to state something else obvious, that’s very pleasing to behold.

Though the show has some impressive costuming – it’s hard to go wrong with ornate headpieces or anything with big white wings – there’s plenty of skin on show; lots of thinly veiled bums and ripped torsos, and while many of the female participants never actually go topless, strategically positioned bits of material bring them as close as dammit.

Making good on the show’s self-applied claim to burlesque, when the dancers shake it up they don’t mess around, gyrating and undulating like they’re caught in an earth tremor. You haven’t seen this much buttock-cheek flapping since Sunday Too Far Away.

Yet, of all the lithe bodies moving through the space the performer who drew the most boisterous reaction on preview night was that of the voluptuous fire-eating, whip-cracking Bettie Bombshell (Leo) who moved with confidence and infectious energy across the space before gulping down yet more flames in a costume with almost enough material to make a small glittery hand towel.

What really sells Oracle, however, are the stunning, gravity-mocking aerial acts that combine precision, beauty and heart-stopping skill.

While ingesting the various dance numbers you’re constantly aware of these black cords that keep descending from the rafters above the special performance space at the front of the stage.

Anticipation builds as you await one – or, more likely, two – of the dancers to leap onto the string and do their thing.

And the routines are truly breath-taking.

The early piece by the Gemini twins (Reed Kelly & Jack Dawson) is a display of grace and balance as they entwine in a series of symmetrical poses.

Especially impressive is Seth Scheuner (Capricorn) who performs an intricate routine in a revolving cage that resembles a giant egg timer, moving in and around the frame with a fluidity that suggests he has cartilage for bones.

As a solo spectacle, the arguable highlight of the show is Andrea James Lui (Sagittarius), pole dancer extraordinaire who must possess the greatest sense of balance on Earth.

In a pair of killer platform heels she performs a remarkable routine on a free-standing circular platform. This mini stage is wheeled out on castors, then locked into place. Note: the pole is only anchored at the base, not at the top, so you spend a lot of time watching her spin about on this precarious stick as it wobbles back and forth like a giant metronome, praying the damned thing doesn’t snap in two.

Then, as if that’s not enough, waiting for her at the plinth is another pole, this one attached to a rope dangling from the rafters. With nary a pause she promptly assails it and does yet more of her thing. It’s extraordinary, executed with a lyrical, liquid grace that disguises the obvious degree of difficulty. At the act’s conclusion you’re torn between applauding and wiping your brow in awe.

So if you’re after a quiet and polite night out at the theatre, Oracle ain’t the show for you.

If, however, you don’t mind having your eyes dazzled by live, non-stop spectacle and your eardrums hammered by pounding audio design, you won’t be left with much to complain about.

Oracle is on till Saturday 8 January at the Playhouse at the Victorian Art Centre before heading interstate; See here for tickets.