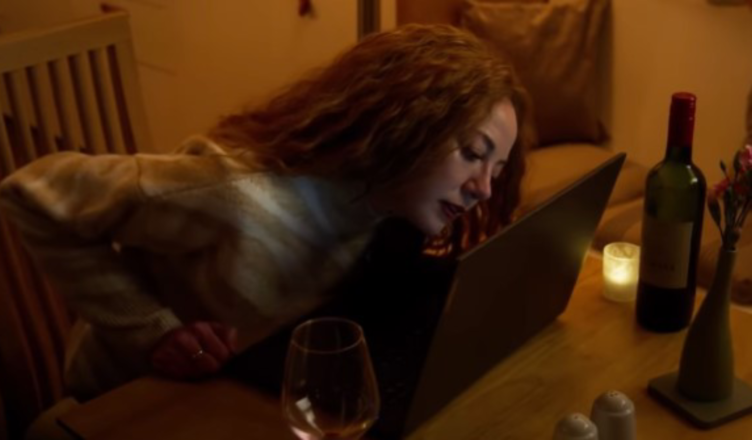 Love online: Diane Morgan gets personal with Zoom in the mockumentary ‘Death to 2021’.

DEATH TO 2021 *** (61 minutes) MA
There probably are more enjoyable ways to kill an hour of down time – trying to get through to your bank’s customer service; paying your gas bill online – but none of them feature Hugh Grant as a privileged stuck up conservative railing about woke culture.

He’s one of the cherries in Netflix’s fairly funny end-of-year mockumentary Death to 2021, which is pretty much on par with last year’s Death to 2020, though perhaps not quite as aggressive.

There’s no penetrating satire or caustic commentary, just some clever comic wordplay and a salvo of snappy snipes about big events and cultural shifts, all spiced by a large roster of notables putting in terrific comic turns, some of whom return for a second bite.

Alongside Grant there are reprises from: Tracey Ullman, who did a killer Queen last time, as a right-wing Fox-type firebrand (probably modelled on Laura Ingraham); Joe Keery (Stranger Things) as a laconic influencer; a very funny Cristin Milioti as a pro-Trump protester who was part of the Capitol incursion; and Diane Morgan playing a British commoner who again brings a straight-faced daffiness to the proceedings, especially when she tries to get intimate with a Zoom date. She’s a hoot and a half.

Social media gets a sound spoofing as Cleery speaks to his followers, with a real treat being William Jackson Harper (The Good Place) as a young social media titan who spouts a lot of doublespeaky gibberish that sounds eerily familiar.

A standard bout of Trump-bashing is perhaps unavoidable, but there are also digs at Biden and lots of well-aimed barbs at Woke culture, including the moribund Oscars ceremony and an In Memoriam-type rundown on all those who were “cancelled” during the year. (Dr Seuss, JK Rowling, Matt Damon, Pepe Le Pew, etc)

Australia cracks a few mentions thanks to the AUKUS agreement and the mouse plague; there are slashes at anti-Vaxxers, the Afghanistan disaster, the Texas abortion ban, Squid Game and Bridgerton (both Netflix shows, coincidentally), No Time To Die, the Facebook crash and the advent of commercial space travel with all due emphasis on the fact that the George Bezos rocket looks like an erect male appendage.

An unseen Laurence Fishburne again provides the narration, though more sedate and arrow-straight.

Death to 2020 was written by Charlie Brooker, who wrote most of the brilliant Black Mirror anthology series, which he produced with Annabel Jones. Both produced Death to 2020. Check it out, especially if you enjoy Death to 2021. It runs a lean 70 minutes.

Brooker has little to do with Death to 2021, which was written by comedy colleague Ben Caudell, who co-produced the special with Jones. Caudell has collaborated with Brooker on shows such as Charlie Brooker’s Weekly Wipe and Cunk on Britain.

He also wrote the funny special Attack of the Hollywood Cliches!, a review of which you can read right here.