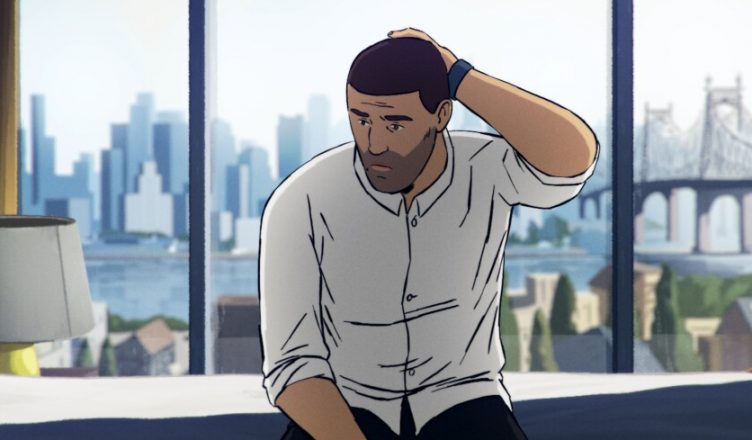 No home: An Afghan refugee searches for home in the animated documentary ‘Flee’.

FLEE ***1/2 (89 minutes) M
One man’s quest for freedom is rendered with subdued emotional power through some very basic, very effective animation in Flee, a Danish documentary film from writer/director Jonas Poher Rasmussen as he follows the trail of Amin (not his real name) from Afghanistan to Denmark via Moscow.

Told in a series of testimonies, Amin slowly reveals the struggles he and his family endured as they fled Afghanistan, only to find life in Russia about as uncomfortable and oppressive as you’d imagine.

With Russian soldiers behaving with impunity when it came to harassing refugees, Amin’s distress in these unenlightened locales was deepened by being gay, something he still had to confront his family with.

The elemental style of the animation – used to protect Amin’s identity – often adds a layer of emotion to the narration; Rasmussen doesn’t fill the frame with extraneous detail, opting instead to show just enough of an image to maximize effect.

It’s a technique used most effectively as Amin details his life-threatening encounter with professional people smugglers, whose cold business-like manner and assurances that all is fine would be enough to further jangle nerves that have already been comprehensively frayed.

Using animation for documentaries is a very risky gambit; the hope is that a storytelling device in which the images are artificially created will produce a deeper emotional effect than actual film footage.

It’s a gamble that pays off handsomely in Flee, just as it did with 2008’s Waltzing With Bashir. Both films also knew the punch of using real footage sparingly, and at the exact right moment.

The film has drawn a lot of favour from Oscar, being the first film to nab nominations for Best Documentary, Best Animated Feature and Best International Feature. Here’s hoping it grabs at least one.