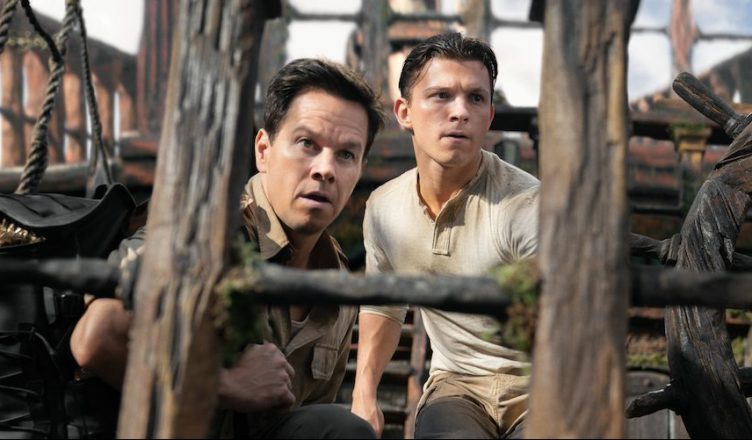 No spark: Tom Holland and Mark Wahlberg in ‘Uncharted’.

UNCHARTED **1/2 (116 minutes) M
There are some ripping, screen-filling visual effect sequences in Uncharted, all of them taking place in the air at altitudes high and low.

One of these segments is so over-the-top cool the film runs it twice. Talk about getting double value for your production dollar.

All up, that’s 15 minutes of the film. Maybe. The rest of Uncharted, sad to say, unspools as generic, stamped out, follow-the-clues action mulch directed without much style and topped off by two A-list stars who apparently forgot to bring their A-game.

To say that there are no performances to speak of from Tom Holland and Mark Wahlberg might be a bit rough, but it is accurate. For the most part the pair engage in a barking match that goes on for the entire film. There’s certainly no chemistry per se, and there’s no rapport because the exposition-heavy dialogue is so forced and forgettable.

It’d be a tad uncharitable to dismiss the film out-of-hand. Uncharted is a standard slice of multiplex mulch from Hollywood and, as such, can be safely consumed as the type of loud big-screen time killer that will allow you to nip out and check your Myspace page or go to the loo without missing much (provided you pick your moment, of course).

Story-wise, what have we got? Holland plays Nate, a bartending shyster who is approached by wily adventurer Sully (Wahlberg) to help find a couple of old sailing ships that are stuffed with gold.

Along for the ride is sexy rival Chloe (Sophia Ali, from India Sweets and Spices) while chasing them is the sexier villainess Braddock (Tati Gabrielle), who does a great job continuing the tradition of action-movie equality for badass women, something we saw in Die Hard 4.0. In other words, when toasting time comes, there’s no special consideration based on gender. So the film deserves credit for that.

If only director Ruben Fleischer moved things quicker and with more style – or, indeed, any style. (Ouch. That was nasty.)

Look, he’s certainly got runs on the board with the Zombieland films and the forgotten pizza-delivery comedy 30 Minutes or Less.

Yet here, for all the money hosed into the production, there’s a surprising lack of zest, even an uncertainty about tone, going from National Treasure to Fast & Furious in the blink of an edit.

It’s films such as Uncharted that make you realize just how long a shadow is cast by Indiana Jones. As Raiders demonstrated so brilliantly some 40 years ago, being derivative isn’t the issue, it’s the joy of being derivative that should be celebrated.

If only there was much more of that here.