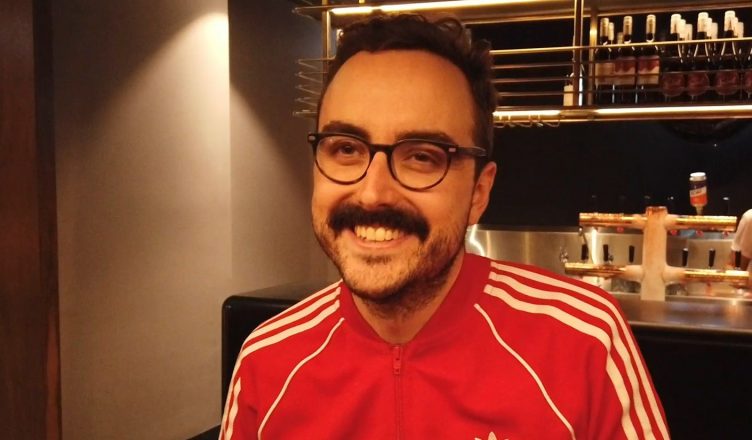 “I try and talk about intense things because they’re what people need to laugh about.”

Ah, the fickle audience. They come for jokes, they get genocide.

A skilled proponent of the “make’em think” school of comedy, Daniel Muggleton says in his new show White and Wrong that if the audience feels comfortable the whole time then he isn’t doing his job.

He did his job.

Dressed in his standard red tracksuit he bravely ventured forth into “don’t go there” territory several times, bubble-wrapping some cutting observations about our tolerance of trading partners who also run concentration camps.

Most of these gags landed, however tentatively, eliciting ripples of laughter tinged with the nervousness of a crowd that appreciates a comedian who dares use humour to make serious points.

Playing to about 60 people at Kicks Muggleton’s set found more secure purchase when discussing the advent of his 30s, his attempts to sire children, Boomers and a range of thorny cultural matters, all seen through the poignant refracting lens of an educated white guy who resents self-imposed ignorance.

Thus comes his excoriating attack on bogan culture, which he doesn’t see as cute or quaint but as a societal cancer Given his affable, low-key, droll style of delivery it’s the closest Muggleton got to being visibly angry.

As when dealing with politics and indigenous issues, Muggleton certainly proved his worth as a caustic social commentator, often bearing a concealed switchblade wit.

INTERVIEW
Though the audience was engaged for most of the hour-long routine, Muggleton admits there were moments when his hold on them was more tenuous than usual.

After the show he took a seat at the rear of the Oxford Scholar to discuss the gig and a broad range of matters including his two-year stay in the UK, the use of whiteness in his work and how he uses comedy to make people think as well as laugh.