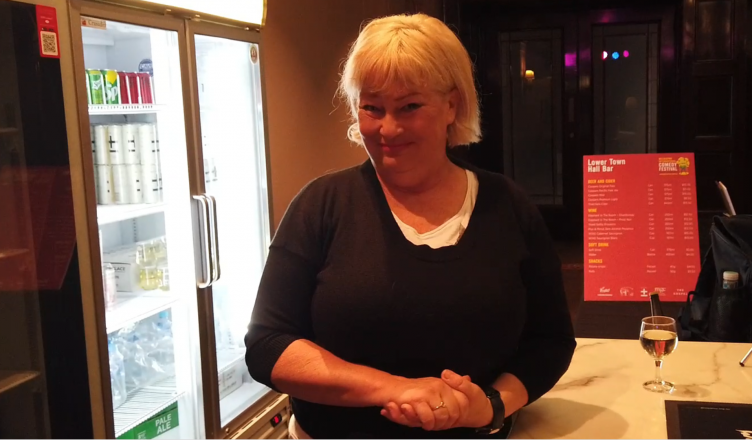 “Seriously, I kid you not, nine days after my stroke I was on stage.” – Bev Killick

The crowd had clearly been waiting for this.

Packing out the Cloak Room at the Melbourne Town Hall they cheered as one as Killick stepped out to present her first Comedy Festival show in two years.

Don’t Tell Tony, which was all set to go two years ago before Covid hit, is an anecdote-based recital of unsavoury, naughty things Killick gets up to behind the back of her hapless, ever-trusting husband.

Her party-girl persona now a fixture on the Australian comedy scene, Killick is clearly fired up to charge through her fifties precisely the way fans expect – with a dirty mouth, an endearingly brazen attitude and a resolute dedication to the cause of growing old disgracefully.

All, of course, supplemented by her signature flashing of high-fashion undergarments. The roar of appreciation from her people make clear how much the world needs Killick’s brand of physical humour.

When she’s on point Killick kills like the veteran she is, ripping into bogan culture and the various behavioural excesses that have become her trademark. She’s a bawdy broad and proud of it.

Still, while she started strong and ended strong there were atypical lulls in this first MICF venture, and a few too many technical stumbles.

It was the first time Killick had incorporated audio-visual material into a show, and it showed. There was a missed cue – she joked through it – and the video pieces, there to illustrate her stories, were largely unedited and way too long. Even her introductory piece, while funny, needs to be tightened.

Also too long were the anecdotes themselves, which often meandered to the point where you struggled to recall how they began.

Though she kept smiles on faces, the energy level of the middle part of the show noticeably sagged. Clearly there’s a need for more one-liners and cutting observations about the travails of middle-aged life. You know, more of her meat and potatoes.

It was telling how once Killick departed from these prolonged set pieces and began bantering with the audience – a skill set she’s honed to a high bar over two decades – the comic energy in the room shot back up.

With the return of the spontaneity, quick wit and friendly foul-mouthed manner she’s know for came plenty of loud laughing, replacing the titters that preceded them.

Asking select souls in the front rows about their lives, Killick discovered how her partial hearing loss could be a boon for her comedy. Asking one woman what her job was came the reply “fleet management”.

Killick heard it as “flea management”. Once corrected she promptly turned it into comedy gold.

Immediately after the gig Bev Killick was kind enough to meet for a chat downstairs at the Lower Town Hall, vacant because it was a Monday night, which most comedians take off.

It’s a lively, entertaining interview. With typical frankness Killick discusses the show, the impact of Covid and the stroke she had last year.

Amidst a range of comedy topics she wonders whether Upfront, the Festival’s annual all-female showcase, might have hit its use-by date.

For info about Bev Killick at MICF, please go here.