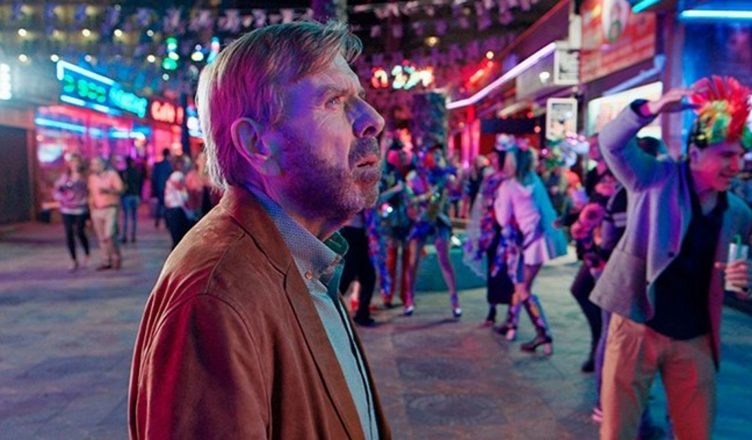 Mid-life crisis: Timothy Spall plays a man out of sorts in ‘It Snows in Benidorm’.

IT SNOWS IN BENIDORM **1/2 (118 minutes) MA
Again proving himself one of Britain’s best character actors, veteran Timothy Spall brings his empathetic sad sack persona to a slow-burn Spanish drama about a man on the edge of late middle age doldrums.

Spall plays Peter Riordan, a lowly, lonely loans officer pushed into early retirement by his bank. Plans to meet his brother in the Spanish holiday town of Benidorm go awry when the debt-laden brother goes missing, dipping Peter into a low-voltage mystery as he tries finding out what happened.

Written and directed by Isabel Coixet The Bookshop), the film relies almost entirely on Spall’s subdued magnetism to keep you watching, yet even his sublime skills aren’t enough to keep you from wanting a more satisfying resolution.

There are some finely moments as we follow Peter ambling through the town following clues about his brother’s disappearance – most involving local police chief (Carmen Machi), but after two hours, it’s a fair call to expect that a drama provide a more fulfilling finale than the cryptic one offered here.

MEMORIA 1/2 (136 minutes) PG
Thunderously dull, largely pointless ramble about a woman (Tilda Swinton in full-on sullen art-movie mode) who is deeply disturbed by an odd sound only she can hear.

Directed with the pace of a sushi train by the highly esteemed Thai maverick Apichatpong Weerasethakul (aka “Joe”), Memoria is one of those artier-than-thou-art films that dares you to read into its stillness and wholesale lack of energy a fathomless expanse of profundity.

Even the film’s finale seems to be referencing its own abject silliness, as though deliberately pulling the carpet out from under any sense of transcendence or deep spiritual nourishment you’ve somehow managed to decipher from such a pretentious pile of hooey.

RABBIT ACADEMY – MISSION: EGGPOSSIBLE **1/2 (76 minutes) PG
Easter itself is on the line in one of the wordiest kid’s films you’re likely to sit through for the sake of giving your kids an hour and a bit of time-killing distraction.

City-dwelling rabbit Max is the first urban rodent to be part of the special secret sect of forest rabbits who make all the Easter eggs. He’s eager to prove himself worthy and help protect the elaborate operation – which inexplicably involves a giant, fragile pile of eggs – from a gang of foxes eager to mount a hostile takeover and so receive the love and adoration the rabbits receive.

Though the German film (dubbed into English, of course), directed by Ute von Münchow-Pohl, is eager to establish a role-reversal theme with a rabbit adversary – a livestreaming social media savvy bunny called Leo – and a fox ally as central to the story, it neglects addressing why the foxes want in on Easter. Surely, that should have been at the heart of the yarn instead of keeping them cooped up as no-good stereotypes. That’s what old-school Disney would have done. (Sorry, Uncle Walt still rules).

Gosh, there’s a lot of yapping in this film, so much so kids might find following all the narrative threads a challenge. The animation is OK, though measurably below the par we expect these days, thanks to Pixar, Dreamworks, Sony, Blue Sky, etc. It’s passable holiday fluff that at least knows better than to overstay its welcome.