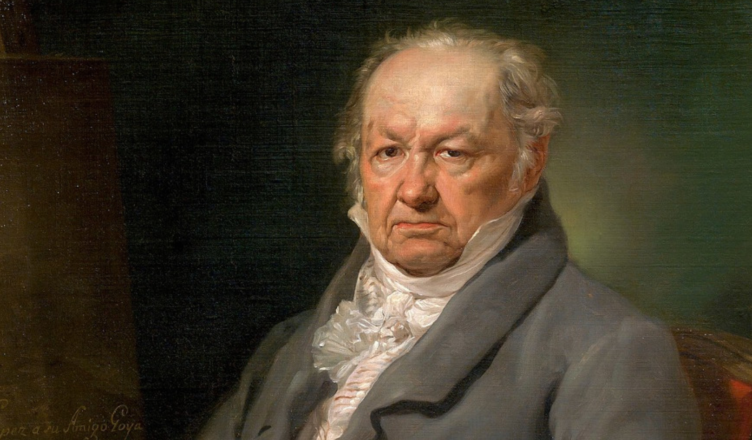 As a widely heralded and popular court painter, Francisco Goya (1746 – 1828) enjoyed great privilege and wealth producing sumptuous portraits of Spain’s most privileged and wealthy, both in formal poses dressed in all their finery and at leisure.

While creating glorious and glorifying works at the behest of his patrons, Goya also had a critical eye on the realities of life, with a sharp focus on social inequality, superstition, corruption, the clergy, failures in education, the abuse of children and the horrors of war.

These observations of the world around him inspired a formidable series of sketches that he produced independently, his commentary unfettered by the expectations that typically came with commissioned work.

In these works Goya showed a love of satirizing courtship rituals and social conventions. He relished skewering the superstitions of the day, conjuring nightmarish visions of goblins, demons and other assorted beasts from the netherworld in images that are often vivid and startling.

When it came to war Goya portrayed its horrors with a brutal honesty that left no room for romanticism and made no allowances for the squeamish. His sketches of The Peninsular War (1807-14), as Spain fought for independence against Napoleon, left little to the imagination, often recording images of atrocities that were beyond the imagination.

One of Goya’s most remarkable qualities was his prescience; to say he was an artist ahead of his time is something of an understatement.

As well as being a great visual artist, Goya had a particular, pungent talent as a wordsmith. His captions often play on irony, irreverence and razor-sharp sarcasm, their wit and black humour sounding very contemporary, a good example being his image of two naked witches on a flying broomstick with the dainty title: Pretty Teacher.

His images of witches, winged demons and hobgoblins look like storyboards for horror movies; Goya’s visions clearly had a huge influence on an artform that was still a century away from being created. Pre-echoes of the horror genre can be seen in later-life works from his his Black Paintings Saturn devouring his son and Witches Sabbath.

As for the debt Goth design owes Goya, that’s incalculable.

Even more striking – and disturbing – are Goya’s images of war; his images of executions, refugees and the tangled corpses following a massacre bear a striking and unnerving resemblance to photographs of atrocities from World War 2 and Vietnam.

The video article provides an overview of the exhibition, complete with curator commentary, interviews and samples of some of the sketches.

Caution Please note: many of Goya’s images are graphic and might upset some. To illustrate the accuracy of Goya’s portrayal of war, a photograph of corpses from the Vietnam war is used that some could find distressing.

Goya: Drawings from the Prado Museum is on at the National Gallery of Victoria until Sunday 3 October 2021.