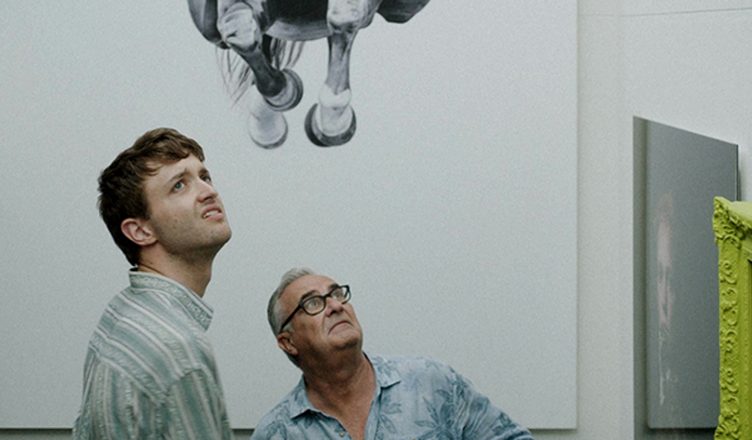 FRIENDS AND STRANGERS **** (82 minutes) MA15+
A remarkable, strange, oddly compelling oddball of a film, Friends and Strangers appears – at first, at least – to be a random collection of vignettes about Ray (Fergus Wilson), a nondescript guy from Sydney who doesn’t seem to have much going on or much of any interest to say.

Yet writer/director James Vaughan, in an arresting and impressive feature debut, imbues these carefully sculpted portraitures with hints, implications and tantalizing clues as to what is going on in Ray’s presumably ordinary life.

The curious scenarios might seem meandering and aimless, yet Vaughan imperceptibly builds tension as though the chance occurrences and small incidents in Ray’s mundane day-to-day life are leading somewhere.

The film is designed to keep you guessing, about who Ray is, what he’s about, and what exactly is going on, the constant toying with audience expectations proving Vaughan a master of the exquisite tease where the very vagueness of the story – not that there is much of a story (or is there?) – becomes weirdly compelling.

Friends and Strangers defies about every cinematic convention on the books. There’s no plot, no character arcs, no third act, no neat resolutions. The scene structures follow no pattern, varying in length and pace, filling you with deepening curiosity about where the heck things are going.

Rife with symbolism, cutaway shots that seems random (but probably aren’t), wonderful straight-faced performances and deliberately inconclusive hints that everything might be connected, the film poses a bunch of questions, the answers of which are largely left to you as scenes bounce around in your head afterwards.

Is Friends and Strangers and extremely clever, intricately designed join-the-dots commentary about millennials, quarter-life doldrums, white privilege and the overlaying of indigenous history by a colonial culture defined by banality, awkward conversations and disputes with neighbours? Perhaps.

Is it a purely absurdist satire about the nihilistic nature of urban life? Perhaps.

Is it both? Perhaps.

The film begins with the very definition of a standing start as Ray and his new friend Alice (Emma Diaz) decide to go on a camping trip.

Nothing much appears to be happening as they set up their tent and converse with a stranger about where they’re allowed to camp.

Just as things begin to develop between them, we’re hit with the first in a series of jump cuts designed to disorientate us as to where we are now with Ray.

It’s often unclear which direction in time we’re moving as Ray chats with a friend on the way to a job interview about shooting a wedding video in an upper-class household.

While his friend falls sick and winds up in the house of a neighbour, Ray engages in a long, rambling discussion with his client (played with deadpan splendour by Greg Zimbulis) about art, renovations and a portrait of the Queen that appears to have a life of its own.

The conversation the film ignites between you and what’s going on with Ray makes Friends and Strangers a highly rewarding viewing experience.

Indeed, so taken was your humble reviewer by the film’s beguiling nature and dry wit a second viewing was called for, which only deepened the enjoyment of the film’s little mysteries and narrative left turns.

Still, the Big Question after two screenings of Friends and Strangers is: what is the deal with the ball?

Friends and Strangers is screening at ACMI until 20 March.

While in Melbourne for the film’s premiere screening at ACMI, writer/director James Vaughan was kind enough to take a seat to discuss the film and take some direct questions about what it’s all about.

As timing would have it, the event coincided with a major Fashion Festival shebang downstairs. We did what we could to get away from the ruckus, but there is still some background noise (most of it reverb), so please excuse.

Having spent eight years on the self-financed project, James Vaughan was in high spirits over the film’s Australian release, its release on Mubi and its festival favour, which includes winning the Special Jury Prize at the 2021 Jeonju Film Festival and Best Film nominations at the Valencia, Rotterdam and Beijing Film Festivals.