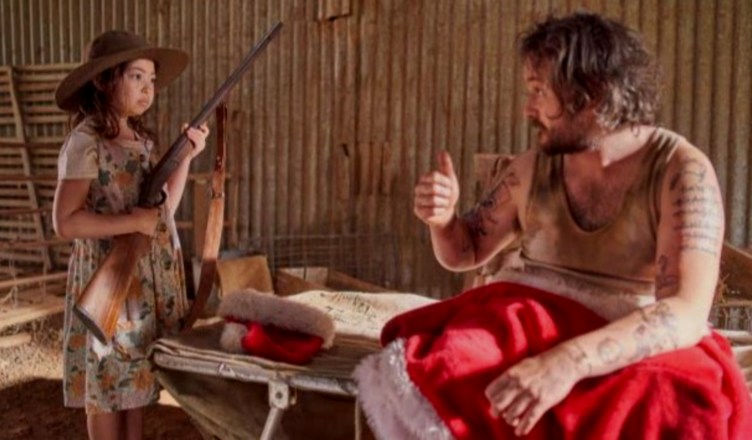 Not very PC: Kids mistake a criminal for Santa in ‘A Sunburnt Christmas’.

A SUNBURNT CHRISTMAS ***1/2 (91 minutes) M
After decades of neglect, the Australian film industry has upped its game with family films over the past few years with gems such as Oddball, Red Dog, Blinky Bill, Paper Planes, 100% Wolf, the Storm Boy remake and all those Maya the Bee movies.

We can also add – with some major caveats – A Sunburnt Christmas, an endearing, though decidedly coarse, Christmas crime-comedy fable that came out late in 2020.

Buried somewhere on a drought-stricken farm is a bag of stolen loot desperately sought after by hapless minor crim Daryl Dunn (Daniel Henshall), who has escaped from hospital by dressing up in a suit he steals from “The Outback Santa”, who was there visiting kids.

Jacking his van, Dunn crashes into a shed on the property and wakes to find himself in the company of young gun-wielding Daisy (Lena Nankivell) and her hypochondriac brother Tom (Eadan McGuinness), who take him to be Santa Claus.

He plays into the ruse, tricking them into secrecy (if a grown-up sees him he’ll disappear) and ingratiating himself with their older sister Hazel (Tatiana Goode) and, eventually, their stressed-out mother Fiona (Ling Cooper Tang).

While Dunn surreptitiously searches for the loot, a nasty crim called Dingo (Sullivan Stapleton) is searching for him, wanting to recover the duffle bag he insists is his.

A Sunburnt Christmas has got to rank as one of the weirdest family films you’re likely to see.

It’s not quite in the realm of Return to Oz (the off-planet 1985 cult classic) but it’s certainly un-PC, replete with salty language, gun-toting kids – Daisy keeps shooting at the sky to make it rain – and quite a bit of violence, with Dingo registering a very threatening presence.

Yet the film has a rough charm and a host of very funny, clever Biblical references (including three road workers as The Three Wise Men) and follows through on hints the story is ultimately about redemption.

A politically incorrect Christmas crime comedy with violence, guns, swearing, Catholic values and nods to the Bible? Are you kidding?

Sounds like oil and water, yet director Christiaan Van Vuuren – working from a screenplay by Elliot Vella, Gretel Vella & Timothy Walker – blends everything into a cohesive, well-paced and uplifting film for the family, provided the parents aren’t over-protective and the kids aren’t snowflakes.

Indeed, the film’s rough edges really enhance the appeal of the film, especially for those who have grown weary of the sentimentality and mawkishness of standard Christmas movie fare.

The film also reeks of Australiana with its dust-blown Outback setting and the winning lead performance by Daniel Henshall, an ever-versatile actor (Snowtown; Acute Misfortune; Any Questions for Ben?) who clearly puts character before glamour here.

Still, there’s a heart in there somewhere; Henshall shapes Dunn as a rank opportunist whose strange new circumstance might just ignite a change in spirit. (Holy Cow. The film has a spiritual element as well?)

There’s no reason A Sunburnt Christmas shouldn’t evolve into a perennial classic, especially given how so many lesser films have done so. (Four Holidays; The Holiday; Christmas Vacation; Jingle All the Way; etc)

For his first venture as a feature film director, Christiaan Van Vuuren has hit as homer with A Sunburnt Christmas.

Best known as half of the comedy duo The Bondi Hipsters (with Nick Boshier) and for his work on comedy shows such as Soul Mates and Squinters, Van Vuuren proves his chops here, winning an Australian Directors’ Guild award, no less.

He also wrote and directed the nifty 30-minute film Dom and Adrian: 2020, where he accomplished the difficult task of fashioning a proper narrative around the sketch-dwelling Bondi Hipsters characters.

Here’s to more. In fact, could he sequel A Sunburnt Christmas? On second thoughts, nah, leave it. Do a Bondi Hipsters Christmas movie instead.

Footnote: The premise of A Sunburnt Christmas bears some fleeting similarities with two films: the 1987 Aussie film Bushfire Moon, in which a kid mistakes a bearded vagabond for Santa; and the classic 1961 British film Whistle Down the Wind where Hayley Mills takes an escaped criminal (Alan Bates) to be Jesus Christ.