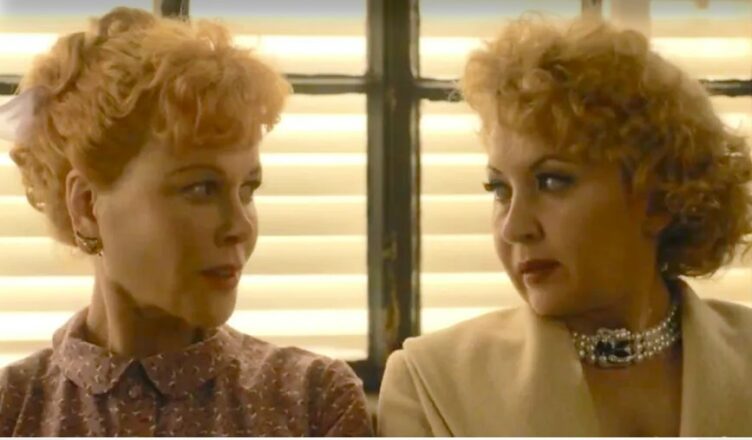 Best pals: Nicole Kidman and Nina Arianda in ‘Being the Ricardos’.

BEING THE RICARDOS **** (132 minutes) M
In what is easily one of her best performances, Nicole Kidman channels the wit, wisdom and non-nonsense business savvy of Lucille Ball, the great TV comedy pioneer who, along with her husband Desi Arnaz (ably played here by Javier Bardem) wrote the rules of situation comedy in the early 1950s with their culture-changing smash I Love Lucy.

In a superlative display of compact storytelling, writer/director Aaron Sorkin (The West Wing; The Social Network; Molly’s Game; The Trial of the Chicago 7) covers an eventful week in the production of an I Love Lucy episode.

On top of dealing with script problems and an incompetent director, Ball and Arnaz have to deal with the accusation that Ball is a communist, something that could stop the show in its tracks, despite its popularity.

There are two modes to Kidman’s fabulous portrayal. In recreating the show she mimics Ball’s goofiness with near-perfection. It’s remarkable – and funny.

The real juice, though, comes when she’s Lucille Ball the head-strong, level-headed producer as she wrestles with executives, writers, studio politics and her husband who, though loving, has a big issue with fidelity, something the newspaper love to splash.

Sorkin is a killer wordsmith and that mastery permeates almost every scene.

The dialogue is crisp and sharp as heck, crackling with one liners and no-nonsense straight talk about business, friendship, marriage and how to put on a show for 60 million viewers.

With exacting attention to detail, Sorkin devotes a lot of time showing the precision Ball demanded from her creative team.

Splendidly directed scenes see her arguing about timing and logic, digging her heels in about the believability of set-ups, calling cast members in for unscheduled late-night rehearsals to get scenes absolutely right.

It’s golden stuff that underscores how the principles of TV comedy were still evolving, with Ball and Arnaz establishing rules and standards that helped shape TV comedy as we know it.

Example: Arnaz devised the pioneering technique of shooting I Love Lucy with multiple cameras, a format that is standard practice today. And the information is imparted casually; as crammed with historical information as the film is, nothing in Being the Ricardos ever sounds like actors spouting the research, a flaw that afflicts many biopics, especially Australian ones.

Along with giving the show’s hard-working writers their due – Alia Shawkat is fab as the feisty Madelyn Pugh; Jake Lacy is more subdued as Bob Carroll – Sorkin pays hearty tribute to Vivian Vance.

Nina Arianda offers a touching portrait of Ball’s comedy co-star and best friend who worked with the frustration of not being allowed to look as attractive as she actually was.

There’s a stinger of a scene in her dressing room where Ball acknowledges her gripe, then respectfully tells her what’s what. The dialogue is cutting, yet loaded with friend-to-friend nuance.

Fans of Lucille Ball will relish Being the Ricardos. Those who know her only by name will learn a lot while being thoroughly engaged by a terrific story about the art of comedy, the evils of the Hollywood Blacklist and one of the most remarkable power couples in the history of show business.

As for the threat that I Love Lucy could be shut down in the wake of an accusation, Sorkin clearly intends the film to reflect the dark reality of today’s cancel culture, with special emphasis of the dangers and idiocy therein. He’s not the first person to draw parallels between WokeThink and McCarthyism, and he certainly won’t be the last.