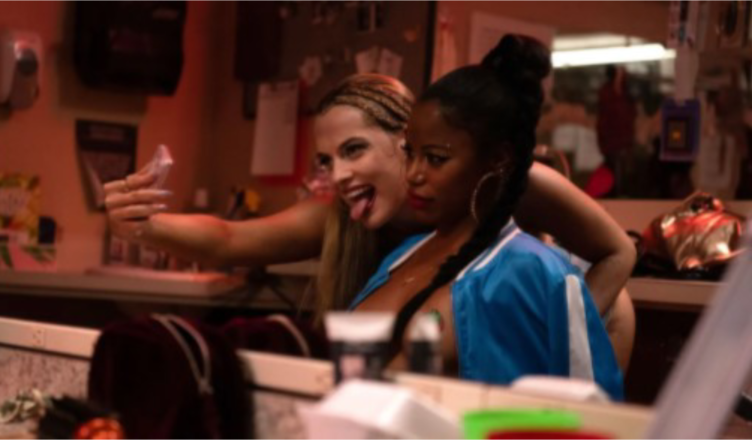 ZOLA ***1/2 (86 minutes) MA
Anybody concerned about how movies love to glamourize prostitutes – Pretty Woman; Risky Business, Leaving Las Vegas; L.A. Confidential, Mighty Aphrodite, Eyes Wide Shut, The Girlfriend Experience etc etc – aren’t going to have much to complain about with Zola, a kinetically directed black comedy that follows the none-too-enticing misadventures of a couple of prostitutes.

Inspired by the Rolling Stone article Zola Tells All: The Real Story Behind the Greatest Stripper Saga Ever Tweeted, the story finds Detroit waitress/stripper Zola (Taylour Paige) succumbing to the lure of her new, socials-savvy friend Stefani (Riley Keough, who was in Mad Max: Fury Road; and, for those who want to feel old, is Elvis Presley’s granddaughter) to buddy up on a road trip and head to Florida with the promise that they can make some quick and easy money.

With them in the car for the two-day trip is Stefani’s weedy, weak-willed boyfriend Derrek (Nicholas Braun; Succession) and a friendly-yet-menacing chap who Zola eventually finds out is called Abegunde Olawale (Colman Domingo).

After a stint of club dancing with Stefani, Zola quickly discovers that the big bucks she was promised come not from gyrating before men but by servicing clients recruited by Stefani and Abegunde.

He turns out to be one mean mother of a pimp, his attitude so bad his threatening words and piercing eyes work like a tractor beam when Zola tries walking away from the situation. Seems her will power and common sense aren’t enough to withstand the power of a murderous glare.