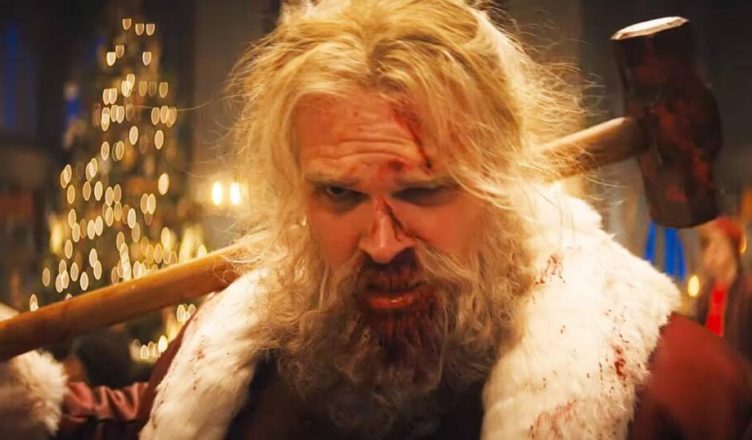 VIOLENT NIGHT ***1/2 (112 minutes) MA
You have to love a Christmas-themed horror comedy that manages to have its cake and eat it, too.

With Violent Night we have a literally ripping yuletide yarn that taps into the widespread cynicism about Christmas time, with all the confected sentimentalism and phony family togetherness.

As a wealthy brood gathers in the isolated mansion of a supremely rich, bitchy matriarch, a team of trigger-happy criminals led by a blood-thirsty thug (John Leguizamo) take them hostage after killing all the security staff. They’re after the money in the vault and are happy to torture and kill to get to it.

The snag in the plan is that Santa (David Harbour from Stranger Things) is in the house, unhappy that his mission to bring a dose of joy into a largely joyless family has been interrupted.

He ain’t the Santa of yore. He’s a heavy drinker, foul-mouthed, disenchanted, he’s been to action man school and knows how to break bones and crush limbs when faced with a gun-toting villain.

Yet though he sounds like a fun-filled parody of Billy Bob Thornton’s take on Father Christmas in Bad Santa, he’s not.

To the film’s credit, this Santa is the real deal, with magical powers, a naughty-and-nice list, a sack of presents, a sled and a team of flying reindeer, who were scared off the roof by a burst of machine gun fire.

Nutty as the film gets, it holds dear the idea that Santa is real, working it into the cynical scenario with great aplomb along with a lot of gory, cartoony violence.

All-in-all, Violent Night is a lovely Christmas movie package for those whose cynicism about the season is nonetheless lined by goodwill and the heart-warming, old-fashioned belief that the nice shall be rewarded and the naughty deserve to be beaten to a pulp.

KOMPROMAT ***½ (127 minutes; subtitled) M
At the precise time when Russian president Vladimir Putin could probably do without any more bad publicity, along comes Kompromat, a taut, grim, punchy, fact-based chase film that will not do much good for the Russian tourist bureau.

Working hard but without much impact as a French cultural officer in the resoundingly unattractive Siberian town of Irkoutsk, Mathieu Roussel (Gilles Lellouche) puts on a provocative stage show that goes down like a brick in a backyard loo with the Russian authorities.

Without time to grab a toothbrush or even change his clothes he’s arrested and thrown in jail on a concocted charge of pedophilia, making him the new centre of attention for his beefy fellow inmates who take delight in thrashing him.

After his brief, pulverizing prison stint he is granted house arrest until his trial, but it quicky becomes clear to Roussel and everybody trying to help him, including his world-weary, straight-talking lawyer Borodin (Aleksey Gorbunov), that his best option – pray his only option – for getting back home to France is to think up an ingenious way to lose his ankle bracelet and quietly hot foot it over the cold, unforgiving badlands of Russia to the nearest friendly nation.

Director Jerome Salle (Anthony Zimmer) knows how to mount a prolonged chase, maintaining tension for over an absorbing hour with plenty of close calls and sudden hurdles impeding Roussel’s one-man mission to make it back to the enlightened West.

There are a handful of mild contrivances mixed in, and the pursuing henchmen, led by one especially determined dude called Sagarine (Igor Jijikine), look exactly as you’d expect a Russian goon to look.

That said, how many options do government-backed Russian villains have aside from the shaved head and dark attire? Poor blighters.