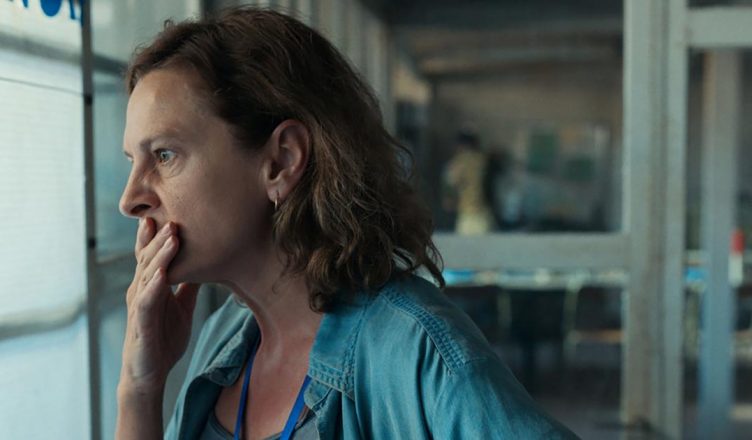 QUO VADIS, AIDA? **** (104 minutes) M
An outstanding film with an outstanding lead performance by Jasna Đuričić as a hapless interpreter, Quo Vadis, Aida? is a gruelling, powerful fact-based drama set in war-ravaged Srebrenica, July 1995, telling of the events and circumstances leading to the massacre of thousands of innocent Muslim people by Serb troops.

The film drops us in at the point of maximum chaos.

As the troops, lead by General Ratko Mladić (Boris Isaković), sweep into the city, civilians desperately pack what they can and get out, with thousands heading for the local United Nations compound hoping to find sanctuary.

Only a small number make it inside the lightly guarded fence, leaving a multitude outside with nowhere to go and nothing to do but sit nervously with their families and wait for whatever Fate befalls them.

Stuck in the middle of this escalating crisis is UN interpreter Aida (Đuričić) who is barely able to keep her head together as she witnesses the calamity slowly unfold before her.

While doing her job translating for the UN commanders, she is also desperate to get her family, stuck on the wrong side of the gate, inside the base. That’s a lot of spinning plates to attend to, and Đuričić embodies the exasperation and fear of being stuck in a hair-trigger situation that could go boom at any time.

As well as serving as a testament to the events that lead to the killings, the film also has a focused political agenda. As tension swells and Serb soldiers demand entrance to the UN site to weed out suspected enemy soldiers, writer/director Jasmila Žbanić is at pains to point a very fixed finger at the United Nations.

In several scenes that will have you gasping in disbelief – made all the worse for being based on real events – we see the UN as a model of staggering organizational incompetence and military impotence.

With lives on the line, the Dutch commander Colonel Thom Karremans (Johan Heldenbergh) tries valiantly to maintain the integrity of the safe zone of which he is in charge.

A man of valour and conviction in his mission, he shrivels before us as his threats of air strikes turn out to be hollow and his desperate phone calls for support are met with the news that the people he needs to speak to are on holiday.

The Serb soldiers have no trouble gaining entry to the base, fully armed, threatening those inside as UN officers and soldiers stand by helplessly.

To them it’s laughable as they exert control of the situation, offering bread and safe passage away from the fighting. They even make fun of the youth and inexperience of the UN soldiers who are meant to be defending the base.

It is a painful spectacle to observe as the circumstances edge ever closer to outright panic and Aida becomes increasingly frantic and helpless in the face of events that all begin pointing in the same horrific direction.

Bravely, Žbanić takes the story beyond the atrocity of the massacre to the aftermath where the semblance of normality thinly veils the quiet, everyday horror of having to live alongside those who committed the killings.

Throughout the film we see people on either side of the conflict and in the middle of all the chaos recognize each other as former friends and neighbours, with Aida being widely recognized as a teacher.

It’s an icy reminder of how war shreds communities, and how the deepest horrors can often reside so close to home.

Žbanić offers no relent with the film’s chilling final scene, and its striking final image. Unforgettable.