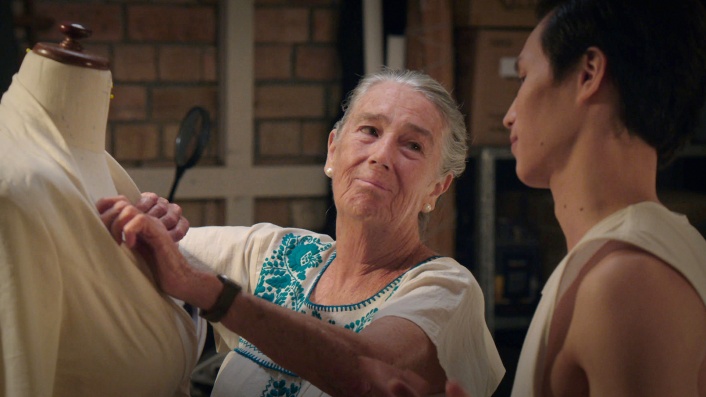 Material girl: Maggie Blinco and Hoa Xuande star in the dramedy ‘A Stitch in Time’.

A STITCH IN TIME *** (98 minutes) M
Though it might sound for all the world like a cute little film about a little old lady who rediscovers her passion for dressmaking, A Stitch in Time actually has some meaty things to say about old age, frustration, compromise and the possibility of human renewal.

While visiting a local market, Liebe (Maggie Blinco) is inspired to take up needle and thread again, a career path she sacrificed for the sake of her no-good life partner Duncan (Glenn Shorrock).

He’s a musician who never made it, a frustration that deepens when he loses his regular gig at the local RSL. Determined not to fade away completely, he approaches former band mate Justin (the late John Gregg) to be part of a new album project, and to put up the finance.

It’s a rough meeting. Justin can see through Duncan’s appeal for creative input. He also senses a long-nurtured resentment. Back in the day their band was about to hit it big when Justin pulled out, destroying wha could have been a stellar career.

Needless to say, Duncan is a short-tempered grump of the first order, yet Liebe still wants to support him with what money she can make from making dresses. Sounds like a doomed idea, but at least she has the support of long-time friend Christine (Belinda Giblin).

And the word from the market’s fashion guru Hamish (Hoa Xuande) is that Liebe’s work is wonderful, encouraging her to continue, despite Duncan’s dismissive attitude.

The promise of this premise is beautifully developed by debut writer/director Sasha Hadden who weaves a strong story about friendship, ambition, dreams and independence, all of it framed by the notion that being old doesn’t mean being useless.

There’s a lot of very punchy talk in the film; Hadden clearly has a ear for realistic dialogue that has people challenging and needling each other with a feistiness that often hits comedy marks.

He also keeps the film grounded in realism, especially as Liebe fights to go her own way. It might be a noble endeavour, but Hadden shows how hard it can be, especially for an elderly woman to go out on her own with almost no resources. Even the good graces of her friends have their limits.

Blinco, a veteran actress with a formidable CV that stretches back to Alvin Purple and beyond, puts in a finely textured performance as a woman who decides that her life of sacrificing herself for another must draw to a close.

There’s a natural flow to the turns by Gregg and Giblin as Liebe’s friends, with Gregg being especially good at keeping things real when it comes to how much support they can offer.

The film’s real treat, though, is Shorrock. Best known as the lead singer for The Little River Band, his terrific performance here suggests he could have developed a parallel career as an actor. It’s always hard to play somebody unlikable, harder still to pull off any shot at redemption, but Shorrock does a swell job.

Unfortunately, the level of performance from the older cast isn’t quite matched by the younger ones.

As well-directed as the film is, Hadden does overplay his hand in highly intimate scenes, overusing music to stress emotions that are all too obvious. There are some touching scenes in the film’s final reel that would have played better had he just let them play out sans music.

Shot on video, the film is blessed to have been photographed by legendary cinematographer Don McAlpine, who also served as executive producer on the film.

While in Melbourne to promote A Stitch in Time, Sasha Hadden and Don McAlpine took a couch to discuss the film, and some other things besides.

It’s certainly interesting to hear McAlpine reflect on his brilliant career, and how his approach to shooting a movie hasn’t changed.