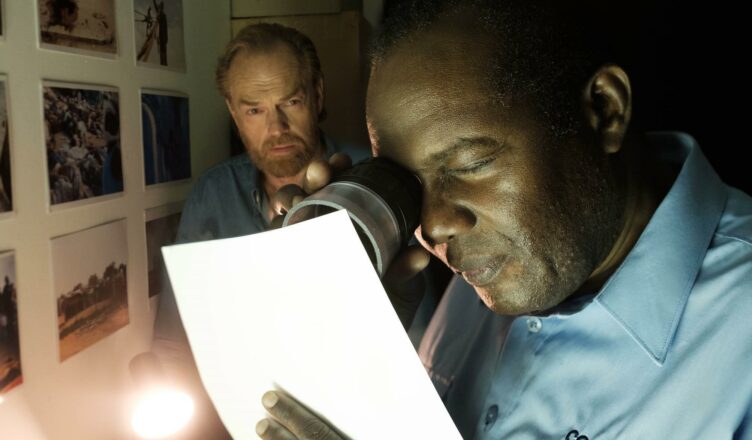 HEARTS AND BONES * (110 minutes) MA
If films were measured solely by their good intentions Hearts and Bones would be a masterpiece. The compassion that underlies the movie’s premise speaks to a host of topical issues and universal values, precisely the types of qualities that make for great drama.

But, as history has taught us over and over, good intentions are not enough to make a film work, or to sell a message. They need to be backed up by strong direction, compelling characterizations and good storytelling.

Sadly, that’s not the case here.

Fresh from the killing fields of Iraq, renown war photographer Dan Fisher (Hugo Weaving) returns to his spacious Sydney loft. As part of a festival a major exhibition of his work is being prepared, a project his devoted partner Josie (Hayley McElhinney) is helping organize.

Stepping into the picture is cab driver Sebastian Ahmed (Andrew Luri), a gent from South Sudan who wants Fisher to photograph his choir. After initial resistance Fisher submits to some warm persuasion (in a nicely judged musical scene) and the two predictably become friends.

Then Sebastian hits Fisher with a major request. He doesn’t want the upcoming exhibition to feature any photographs of the massacre that took place in his village 15 years ago where he lost his family. Sebastian’s current wife Anishka (Bolude Watson), pregnant with their second child, knows nothing about his trauma and he wants to keep it that way. Fisher says he’ll think about it.

It’s at this trigger point that the story of Hearts and Bones begins to collapse into a pile of implausibilities that compound stumbles that have already set into the film.

Directed by feature first-timer Ben Lawrence, who co-wrote the screenplay with Beatrix Christian, the big problem with Hearts and Bones is that it simply lacks believability. Numerous story holes grind against the film’s attempt to set a realistic tone through its low-key style and unobtrusive, handheld cinematography.

There too many key points in the film that the average person, using everyday common sense, simply wouldn’t swallow.

Just one example – of many – is Sebastian’s request to Fisher not to show photos of the massacre that took place in his village.

Now, by this point in the story the film has clearly established how the photos in question are famous, have been printed in a book and are, presumably, online and accessible to everyone.

Yet all Fisher says in response to the request is that he hasn’t made his final decision about which photos to include in the exhibition. Sebastian raises the issue of how people will judge the photos, but how can that be taken seriously given that the photos have long been out in the world?

Another crippling problem is the issue of Fisher’s memory, an aspect of his character the film apparently doesn’t know what to do with. We are meant to believe Fisher can’t recall a major event from 15 years ago, even though he photographed it in vivid, graphic detail. It just doesn’t fly and stands as one of many false notes in a film that is supposed to be about the quest for truth. It’s shabby storytelling that undercuts any dramatic tension.

There are even awkwardly directed moments when the film seems to lose interest in its own story.

The worst of these is a dinner party scene where the film’s big central themes are fleetingly mentioned as if the characters were discussing yesterday’s weather. Surely things should have sparked here, dialling the drama up to 11 and fleshing out the issues that have been simmering up till this point.

At one point Fisher even casually asks if he can pull out of the exhibition, a ridiculous line that gets an equally ridiculous response from the organizer, a wasted character (played by veteran Toni Scanlan) who should have spent much more screen time putting Fisher’s feet to the fire.

Nor does he get any rebuke from anybody else, despite what a normal person in that circumstance would say. Even his brother Graham (Alan Dukes) wimps out. It’s a weakly conceived scene that should have been a dramatic centrepiece.

On top of these issues is the watery characterization of Dan Fisher.

And, again, there is the issue of plain believability. Deep into the film’s third act Fisher does something that is not only completely at odds with his character, it saps him of any sympathy. Not even an A-grade actor such as Hugo Weaving can make work another example of the film’s lazy storytelling.

The performance by first-time actor Andrew Luri as Sebastian has its moments, but too few of them. Though his effort is obvious it is often too obvious, especially when sharing the frame with Bolude Watson, a seasoned actress whose turn is much more natural.

One of the heartening things about the film is its ambition to engage with world issues, something we saw with Jirga and Buoyancy. If only the film had the nous to pull it off.

Presumably in a bid for hot-button revelance the film tentatively touches on a raft of prickly topics such as the ethics of photographers, the morals of revenge and the rationale of violence (very germane given current events in the US).

Yet it flakes out with a very soft-headed, poorly thought out finale that introduces yet more story flaws and leads to a closing photo montage that reeks of desperation in its clumsy hammer-over-the-head message about refugees.

These final moments just aren’t believable, like much of the film.

While full of noble goals, too many weak scenes, lapses in plausibility and poor characterizations keep Hearts and Bones from being the powerful film it clearly yearns to be.

The film was directed by Ben Lawrence. It’s his first feature film, having made the extraordinary 2018 documentary Ghosthunter. Lawrence is the son of Ray Lawrence, who gave us Bliss, Lantana (an overrated film) and Jindabyne (a vastly underrated film). He is also a noted photographer and acclaimed director of TV ads and short films. One hopes his next feature better reflects such a pedigree.

As a footnote, Hearts and Bones is the latest troubling example of an Australian film with a story that seemed in need of another pass or two through the filter. That issue dogged Australian cinema in the 1980s and ’90s. The last thing our film culture needs right now is to see it return.