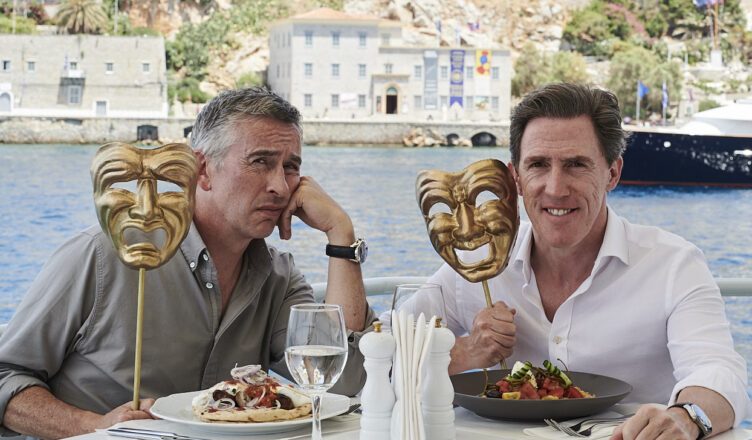 Eating Greece: Steve Coogan (left) and Rob Brydon embark on their fourth restaurant tour in ‘The Trip to Greece’.

THE TRIP TO GREECE *** (103 minutes) M
If there’s any major point of difference between The Trip to Greece and the previous three culinary trips across Britain, Italy and Spain it’s that Steve Coogan – or rather, the fictionalized version of him – is more tolerant of his long-time travelling companion Rob Brydon. At times, he even seems positively entertained by him, something we never really saw in their first three outings.

Perhaps this is a symptom of the mellowing that is supposed to accompany the latter stages of middle age. Or perhaps it’s long overdue acknowledgement by Coogan that Brydon can be as funny as he is, especially when ad-libbing.

The lads have been commissioned to follow the path of the Odyssey while sampling swish restaurants, the chief purpose of which is so they can sit opposite each other and exchange impressions of their favourite actors. They reprise many of the bits that have come before, most notably showing their deep infatuation with the performance by Anthony Hopkins as Captain Bligh from the 1984 film The Bounty.

As usual most of their comic banter is improvised and, as usual, director Michael Winterbottom has cut this film together from a six-part series that will come to us in a few months.

There’s no doubt the luxurious sojourn Coogan and Brydon undertake through Greece is as funny as their previous trips, only this time around there is a tinge of pathos to the comedy, with both men now deep into middle age.

Certainly the big thing on both their minds is the life-affirming value of family, something that appears to have overtaken their preoccupation with young women (though that is still in evidence).

Highlights include their rendition of the Gregorian chants, Brydon’s Dustin Hoffman/Laurence Olivier bit from Marathon Man and Coogan’s ruminations about his career and his ailing father.

Apparently The Trip To Greece is supposed to be their final voyage, though that is difficult to take too seriously given how successful the previous editions have been and how relatively easy it must be to make these Trips.

After all, the only job Coogan and Brydon have is to be spontaneously funny, a task made virtually stress-free by the assurance that what doesn’t work ends up in the deleted footage file.

And however deeply set their resistance might be to making more, one would like to have a camera on their faces should the BBC come to them and suggest they make The Trip to America, offering them the opportunity of eating their way across a land of comic opportunity each man has barely touched.