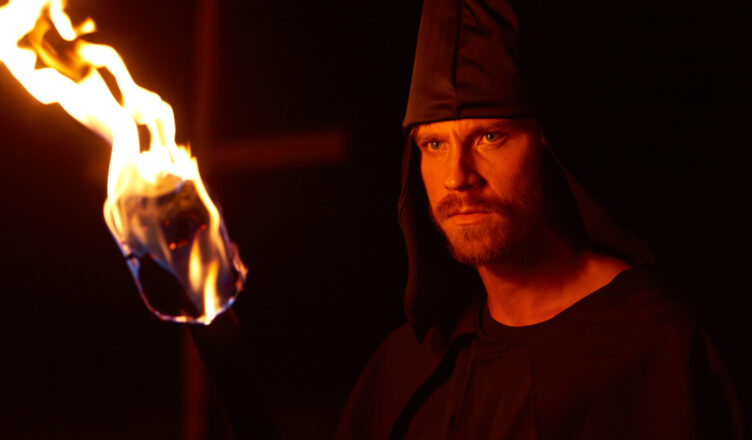 Burning issue: Garrett Hedlund plays a man trying to break away from the Ku Klux Klan in the fact-based drama ‘Burden’.

BURDEN *** (117 minutes) M
All roads to redemption are bound to be bumpy – that’s what makes them such prime fodder for good drama – and the one at the core of writer/director Andrew Heckler’s moving, fact-based tale is especially corrugated by conflict, challenged values and soul-shaking revelations.

Traversing through a morally jagged tale of prejudice, family loyalty and racial violence is Mike Burden (Garrett Hedlund), a hot-headed young white redneck with some huge chips on his shoulder.

Raised by Tom Griffin (a darkly brilliant Tom Wilkinson), a fiercely devoted senior officer of the Ku Klux Klan, Burden has long been a loyal member of the KKK, happy to don the conical hood, burn crosses and terrorize the black people in his small Louisiana town, especially defenseless women walking home from work.

Set in 1996, the film kicks off on a big day for the white power people. Burden and his adopted family have just realized a long-cherished dream – the grand opening of a redneck museum devoted to the glories of the KKK and the Confederacy.

All sorts of paraphernalia is on sale, and for a mere $15 you can be photographed in full KKK regalia. The store is in the middle of town, of course, right in everybody’s faces.

As you’d expect, the town’s residents aren’t too happy about this, especially Reverend David Kennedy (Forest Whitaker), the local black holy man. He presides over a large and loyal following, preaching the tenets of Martin Luther King Jr who championed the principles of non-violence and loving your enemy.

These ideals do not go down too well with his muscle-minded sons who prefer the Old Testament philosophy of an “eye for an eye” rather than the New Testament teachings of Jesus Christ that suggest a more tactful way to triumph over your adversaries.

Things quickly reach flashpoint when Kennedy stages a protest out the front of the KKK store. Burden is ordered by Griffin to head to the roof with a rifle and take the good reverend out.

Compounding his doubts is his partner Judy (Andrea Riseborough). She has Klan in her family and has rejected their values, largely for the good of her son. She issues Burden with a blunt ultimatum: the Klan or me.

The consequences of his decision expose the power the KKK still hold over his polarized community and how deeply rooted his own learned race-hatred is.

Though its messaging can be a tad ham-fisted, Burden packs quite a punch, its most arresting aspects being its portrayal of everyday racism, the difficulty of forgiveness and the power of social conditioning.

On top of that we are given a quartet of piercing lead performances. Hedlund does a solid job embodying the confusion of a man torn between two value sets; Riseborough is a study of maternal strength, especially given her unstable financial and personal circumstances.

As Reverend Kennedy, Whitaker, who had his head shaved for the part, blends moral certitude with compassion, doing his best in challenging situations to hang on to his faith-based principles of peace and understanding, even when his kindness is thrown back in his face.

But it is Tom Wilkinson’s portrayal of Griffin, the local KKK guru, that proves most impressive and unsettling. A veteran British actor, Wilkinson can brandish a convincing American accent better than most – In The Bedroom; John Adams (as Benjamin Franklin); Selma (as LBJ) – and here he casually spits racist bile and incites violence with an effortless Southern twang that is truly frightening.

Regrettably, the film – a 20-year long passion project for Andrew Heckler, produced by Whitaker, Hedlund, Wilkinson and Riseborough – has not found much of an audience despite its pedigree and strong story.

As timing would have it, Burden addresses issues germane to present events in the US where rioters have used the cover of genuine anti-racism protests to loot, destroy property and assault people.

One hopes the film’s topicality and arguments against rationalizing violence will attract the audience it deserves.

Available to rent via Foxtel Store 4 June – to 4 July.