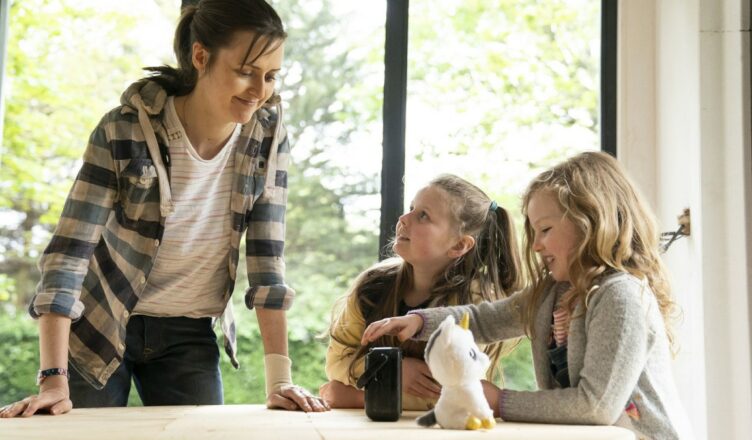 In it together: A single mother decides to build her own house in ‘Herself’.

HERSELF *** (97 minutes) MA
The ever-reliable service houses have provided to storytellers as metaphors of life is used to touching effect by director Phyllida Lloyd (The Iron Lady; Mamma Mia!) in Herself, a well-observed squib of a film about a woman who seeks to improve her circumstances by literally re-building them.

Having extricated herself from a bad marriage with an abusive partner, Sandra (Clare Dunne, who co-wrote the screenplay with Malcolm Campbell) finds herself in dire straits, with two restless little daughters and a collapsing menu of housing options.

Finding little support from official sources, she visits that special place where all of life’s issues can be solved with a short how-to video.

With a bit more research, some financial help from friends and still no help from the government – she’s quite the optimist – Sandra decides to build her own abode in the spacious backyard of Peggy (Harriet Walter), the incredibly generous woman she cares for. (Nice bit of luck, that.)

Strong and stoic as Sandra is, the film is not silly enough to suggest that she can confront this life-changing project on her own. Cue: an affable ensemble of friends and local eccentrics to muck in.

Wisely, Sandra’s domestic situation is kept in an emotional state of grey. Her husband Gary (Ian Lloyd Anderson) still has access to the kids and maintains a place in Sandra’s heart, despite his violence towards her.

Though she’s made some big films Lloyd is most noted as a theatre director, and her skill with actors is at the forefront here, along with some deft use of verite camera work that add realism to those moments when Sandra has to deal with the buffoons of bureaucracy.

It’s tempting to tag Herself as a #metoo film, and while it fits neatly into that freshly-minted category, it is neither strident nor strained.

Laced with some obvious but unforced symbolism, Herself unpacks the trials of a troubled woman who asks for nothing more than the modest amount of space and support she needs to make her own way in the world.

LITTLE JOE *1/2 (105 minutes) M
An above-average idea is let down by some very average direction in what could have been a tight, tense, small-scale sci-fi thriller but is, sadly, a rather limp and unconvincing outing.

The creation of a genetically engineered flower that rewards doting owners with a scent that makes them feel happy inevitably prompts problems of addiction and delusion.

Even the lab coat-wearing inventor of the flower Alice (Emily Beecham) becomes suspicious of the flower’s potency; she begins questioning whether claims from colleagues that they are behaving as normal might be a ruse designed by the highly intelligent flower to manipulate people into spreading its seed.

Writer/director Jessica Hausner could have fashioned a sharp, whip-smart, trouble-in-the-lab, Little Shop of Horrors meets Invasion of the Body Snatchers thriller, but too much explanatory dialogue and some really dodgy performances sap the proceedings of suspense or wonder as to what is actually going on with the plant.

The surfeit of white walls, glass panels and echoing corridors in which the players move give the piece a classy, clinical, slightly foreboding look. Too bad the film’s wobbly direction doesn’t live up to it.