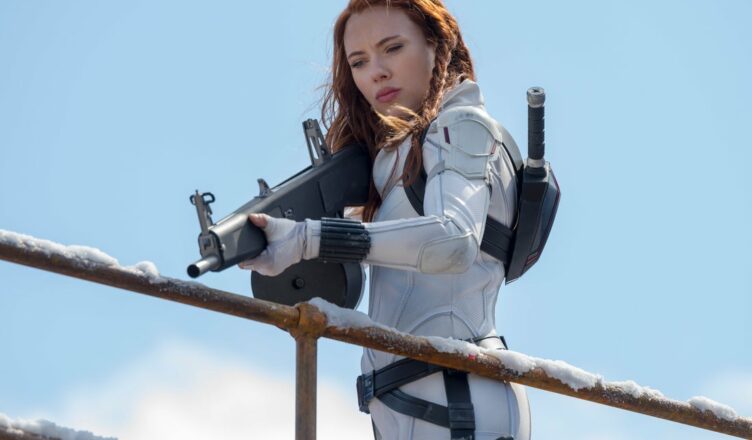 Ready for action: Scarlett Johansson returns as the titular character in ‘Black Widow’.

BLACK WIDOW **1/2 (134 minutes) M
There are too many moments in the latest addition to the impressively titled Marvel Cinematic Universe where you find yourself thinking precisely what fan base the film is designed to please.

Of course, the film must service the hordes of Marvel fans who have made the franchise one of the most successful in history, thanks to saturation marketing and regular output, and despite pumping out plenty of very forgettable sequels. (Thor 2 anyone?)

Yet the film also has a lot of love for James Bond films, in particular those over-the-top 007 adventures from the mid-1970s and early 1980s.

Black Widow references 1979’s Moonraker and features a silly plot that largely follows the contours of a standard old-school Bond film, complete with a power-crazed villain who resides in an impressive lair while plotting to take over the world with an evil scheme.

Scarlett Johansson returns as Natasha Romanoff, aka Black Widow, the second-tier superhero character that has succeeded in overshadowing her impressive CV and making a lot of people forget what a good actress Johansson actually is. (Match Point; Don Jon; Lost in Translation; Vicky Cristina Barcelona, etc.)

With sister Yelena (Florence Pugh), father Alexei (David Harbour) and mother Melina (played by the apparently ageless Rachel Weisz), Natasha needs to track down the bad guy who wants to take over the world using a method of mind control that has already secured him a worldwide network of agents.

The supposed point of distinction with Black Widow is the emphasis on drama and character as the story delves into Natasha’s history as a KGB agent and how she came to be living in the American heartland with a fabricated family.

Black Widow director Cate Shortland is an Australian filmmaker best known for Somersault, Lore and Berlin Syndrome, all low-key arthouse movies that would reasonably suggest she might have the nous to bring some depth to the proceedings in a big Hollywood studio tentpole film.

Yet while the direction is serviceable and delivers a passable, by-the-numbers superhero lark, the film doesn’t build sufficient tension or empathy as the pace powers down to “develop” the movie’s underlying family theme.

Hence we get a lot of slow, rather dull scenes in which coils of backstory are unfurled at leisure.

It’s a bit of a trudge. At a guess, Shortland is attempting to achieve in Black Widow the type of rich character appeal the rival DC movies – Batman, Joker, Wonder Woman, even Superman – are known for.

Alas, Shortland falls short and Black Widow turns out to be a bit of a bland-out in that regard, just as Captain Marvel was – though, to be fair, it’s not quite that bland.

Performance-wise Johansson does her duty, and Harbour shows verve. The standout, though, is Pugh who does a nifty, scene-stealing job as the wise-cracking Yelena, making a few fairly funny self-referential gags that serve to acknowledge the film’s overall lack of originality.

A very large money hose has been directed at the production to ensure the film boasts the huge scale and heft required of a throwaway comic book popcorn seller, complete with elongated splatters of expensive, intricate visual effects that bear that trademark sense of sameness shared by so many – though not all – Marvel films.

Is it really conceivable that nobody at Marvel has dared knock out a memo raising the issue of how almost all of their big action sequences look so much alike? Even the fight scenes here look as though they’ve been copied from previous Marvel films.

Indeed, it’s a tad ironic that Marvel’s most adventurous and intriguing outings are happening on the small screen, with shows such as

Still, as a made-to-order serving of superhero cinematic chowder, Black Widow is a decent-enough frolic that sticks to the Marvel movie formula while also saluting the action-movie template forged by the 007 series.