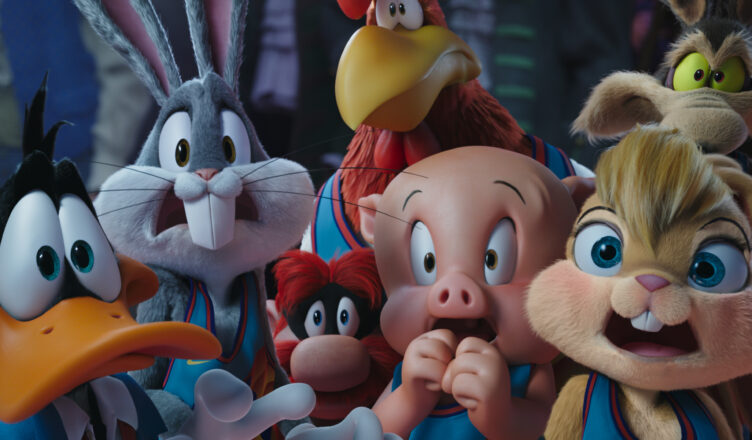 One more time: Bugs and the gang return in ‘Space Jam: A New Legacy’.

Things go well for about the first half of the film.

We meet superstar basketballer LeBron James (playing himself) and his youngest son Dom (Cedric Joe). Some standard tension between the two begins to simmer as James pesters Dom to practice his basketball when the kid would rather work on developing his own video game.

While on a visit to Warner Bros the two get hoovered into the “Server-Verse”, a digital netherworld run by an egomaniacal program called Al-G Rhythm (Don Cheadle). Whether this is intended as a respectful homage to Disney’s breakthrough 1982 film Tron or a bold-faced rip-off is hard to tell, but the similarity is striking.

Seeking due recognition for his work, Al-G holds Dom captive, promising to release him if James agrees to play against his team of digital giants on a virtual basketball court before a live worldwide audience.

There are a few decent laughs en route as the film drops in on Warner films such as Casablanca, Mad Max: Fury Road, The Matrix, Austin Powers and Harry Potter.

Then, alas, comes the point where the game is about to begin and these beloved characters, who till now have been rendered to resemble their original cartoon form, are transformed into gleaming 3-D digital figures.

And zap! There goes the bulk of the film’s charm.

It’s only a guess, but buried deep in all the emails and memos and paperwork involved in the production of Space Jam 2 must be a rationale as to why on earth they would do such a thing.

It’s straight out stupid. Even the recent Tom & Jerry had the good sense not to mess with a classic asset. As the showbiz saying goes: if it ain’t broke, don’t fix it. (Side note: Legend suggests that the actual original quote featured a different F-word.)

Added to this, the film simply becomes boring as the fantasy basketball game with no rules and no discipline eats up much of the film’s ridiculously long running time.

The only thing of interest is scanning the background crowd for characters from Warner films, which include Pennywise from It, the droogs from A Clockwork Orange, Jim Carrey from The Mask, etc.

A quick check confirms that the visually brilliant, funny, witty original film ran a lean, clean 90 minutes. There is nothing in the sequel that justifies running a minute longer than that, yet it drones on for another half hour.

It’s a huge pity the film doesn’t make good on the playful spirit it displays in the first half, especially with incorporating famous films into the story, the way Steven Spielberg’s underrated Ready Player One did.

And why is the film so damned anodyne? It’s another glossy $200 million studio bland out. Thanks for that, Hollywood.

There are plenty of references to classic cartoons, yet the tribute is very shallow with many of the characters being stripped of the very things that made them so loveable.

Are these now deemed too offensive, too stereotypical for the general public? If so, why have them in the film at all?

Are studio films now so petrified of offending a single person with these signature affectations, even though people understand they are clearly jokes and entirely innocuous? After all, the original cartoons are still available to everybody.

Surely such attributes, if deemed so, could be reconfigured in a story without having to leech the life out of them, which is what happens in Space Jam 2. Essentially, the film sports a host of classic cartoon characters sans character.

Equally annoying: the film features a bit of cartoon violence, but less than you’d see in a Road Runner cartoon. What a letdown.

And why the obsession with basketball, and again using a play-off game as the climactic event?

Why not get the human characters caught up in an actual narrative with the cartoon characters? You know, like in 1988’s live-action/animation Who Framed Roger Rabbit, a film whose value as an instructive landmark seems to grow with age.

As for the film’s title, we don’t yet know whether this Space Jam will leave a legacy comparable to the first Space Jam, so calling it Space Jam: A New Legacy is a bit presumptuous.

Then again, it sounds better than Space Jam: The Expensive, Uninspired Sequel.

Sigh. Where’s Michigan J Frog when you need him?