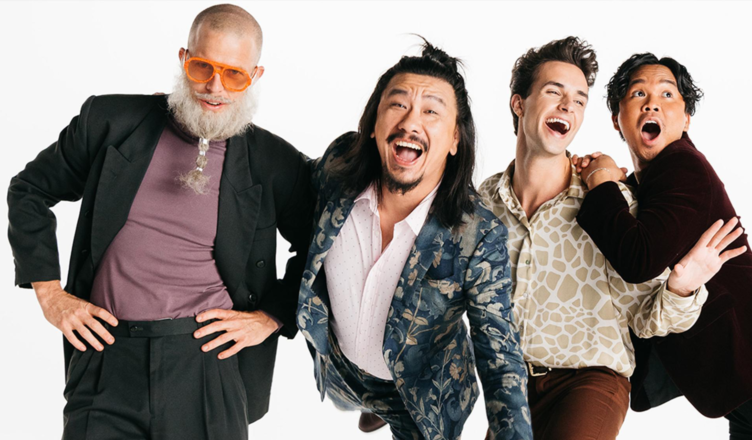 Comedy gold: This Q-Anon quartet is ready for makeover action in ‘The Moth Effect’.

THE MOTH EFFECT **** (108 minutes; six episodes) MA
whole series review
Sketch shows are always a hit-and-miss affair, the hope always being (of course) that you get more hits than misses.

That’s not an issue with The Moth Effect. Even after three viewings it’s hard to spot a misstep, bad edit, bum gag or satirical stab that doesn’t land precisely where it’s supposed to.

Created by Nick Boshier and Jazz Twemlow, there’s a lot of really smart comedy here, with plenty of thought clearly going into skits that address such contemporary topics as modern-day marketing, the environment, the woes of social media and the scourge of Woke culture.

Still, conceptually strong, thought-provoking comedy is all well and good, but if it don’t tickle, there’s ain’t no point. That’s another problem The Moth Effect doesn’t have.

Whether it’s a refined, idea-driven sketch satirizing self-centred documentarians, a song about a lame party or a low-flying string of gags about the questionable advent of Matrix 4, the show’s priority is to always bring the funny.

Invariably, very clever, arguably high-brow segments are matched by dashes of effervescent, outright silliness, with the influence of Monty Python in clear, glorious evidence throughout.

Take the romantic date a lonely barfly has with a sea mine. Or the street gangs who fight with philosophy instead of fists. There’s a terrific spoofing of morning TV banality, and medieval warriors using the power of positive thinking instead of swords and shields.

The show’s ever-topical skewering of online culture is consistently on point.

In another razor-sharp stab we witness conflict infect the marriage of a professional couple – played by A-List Australian actors Miranda Otto and David Wenham – when one of them refuses to allow data sharing with their newly acquired pillow.

The rampant idiocies of social media and its reductive, anti-intellectual culture proves a favourite target, perfectly captured in a brilliant bit where a queer quartet of Q-Anon enthusiasts give a respected author whose books no longer sell a radical makeover. Acting icon Bryan Brown is splendid as the blind-sided author in what is probably The Moth Effect’s crowning achievement.

While the show has a progressive bent, it is decidedly wary about Woke culture, its smattering of barbs about “woke drones” and “woke cops” pretty much summing up all there needs to be said about the movement’s excesses.

Same, too, with the sketch about the politicians breeding stable, which reflects how the show prefers to sidestep specific references and step back to take a broader satirical view.

As result you get a concise, future-proof sketch about all politicians that will still get laughs 80 years from now, refusing to date the way most headline-driven political comedy does.

Working with some pretty sweet production values, the broad palette of visual styles required in The Moth Effect are extremely well rendered thanks to savvy direction by Gracie Otto and Craig Anderson.

Otto gave us The Last Impresario, Under the Volcano and season two of The Other Guy; Anderson’s directing CV includes Black Comedy, Double the Fist and the very underrated Review with Myles Barlow. (Catch it on iView. It’s a hoot.)

At 108 minutes, The Moth Effect is easily bingeable in one gulp, though you might find yourself returning to the buffet more than once, as was the case with your humble reviewer.

And if watching The Moth Effect leaves you hungry for more of the same sort of stuff, you must check out the show’s progenitor Nice Shorts, a web series by Moth creators Jazz Twemlow and Nick Boshier. Check it out here. It’s similarly smart and extremely funny.