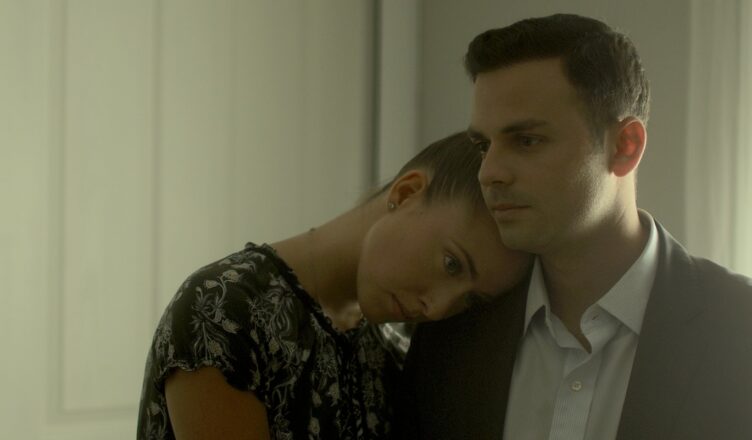 A LION RETURNS **** (92 minutes) MA
In Serhat Caradee’s dramatic blowtorch A Lion Returns a young Muslim man who has returned to Australia after fighting with terrorists in Syria seeks re-admittance into the suburban home of his parents so he can see his dying mother one final time.

Waiting for permission in the back seat of a car, Jamal (Tyler De Nawi) is told in no uncertain terms by his brother Omar (Danny Elacci) that he is about as welcome as a vampire at a blood bank.

To answer the divine call of the Jihad Jamal turned his back on his entire family, including his Australian wife Heidi (Jacqui Purvis) and their son.

While he was busy partaking in atrocities in the name of his god, Jamal’s family has had to live with the full brunt of his desertion – public shaming, social alienation, police surveillance and media scrutiny.

Now fully aware of the indignities that came in the wake of his betrayal, Jamal is seeking some form of closure, though the true purpose of his visit remains elusive.

The shadowy nature of his underlying motive gradually fills the film with a tension that Caradee slowly, carefully builds to flash point. The real reason for his visit is made more dubious by the presence of Yahya (Buddy Dannoun), Jamal’s Jihad-loving uncle who may have had a hand in smuggling Jamal back into the country.

The film packs a knockout punch with a powerful finale that is deliberately left open to interpretation, the big, overriding question being in which direction Jamal’s next move will be.

Will it be towards true redemption, a move that would require true bravery. Or will Jamal complete the journey that began with the abandoning of his family and step down into the ninth circle of cowardice?

And it’s all achieved through prolonged dialogue exchanges that are at once razor-sharp, heartfelt, sorrowful and raw.

Though the film is set around a single suburban household the drama within it traverses a mountain range of emotions, with Caradee ever-vigilant to keep from engaging in histrionics or issue-fuelled melodrama.

A Lion Returns is host to an ensemble of incisive, heart-piercing performances.

Tyler De Nawi and Danny Elacci do exemplary work in the film’s opening stanza, most of which takes place inside a car as Jamal tries arguing his way through Omar’s steadfast refusal to allow him into the house.

As Jamal’s wife Heidi, Jacqui Purvis is outstanding. Her moving portrait of the film’s most emotionally torn and distraught character brings into sharp relief the deep sense of abandonment, disgust and confusion Heidi has had to live with for years while raising their son. We see in her anguished face the story of a woman tortured by wanton emotional cruelty.

The other stand-out turn comes from Taffy Hany as Jamal’s father Yusef. He’s not on screen for a long time and he doesn’t say much, but he doesn’t need to.

Hany does a great, taciturn job portraying the type of decent, hard-working Muslim citizen whose faith, family and life’s work is insulted, tainted and dishonoured by any form of violence – in word or deed – committed in the name of religion.

And how worse it is when the pain has been inflicted by his own son, a person he clearly wants to disown.

To put this central theme even more bluntly, A Lion Returns is as pro-Muslim as it is anti-Jihad.

That’s a reading of A Lion Returns writer/director Serhat Caradee heartily agrees with.

While in Melbourne for a special screening of the movie, the Sydney-based filmmaker took some time for a sit-down to discuss why he made A Lion Returns, what his intentions are and the surprising effect the film has been having on some audiences.

Made on a minuscule budget, much of which was crowd-funded, A Lion Returns was shot in 10 days from a screenplay Caradee had spent about two years researching and writing.

It is, by any fair account, precisely the type of contemporary, confronting, issue-based film Australia should be making.

Alas, much like Cedar Boys, A Lion Returns is saddled with the problem of trying to connect with audiences without the benefit of a marketing budget – an issue that has dogged too many fine Australian films for too long.

Caradee addresses this point head-on and offers a solution alongside the insights into his motives for making A Lion Returns.